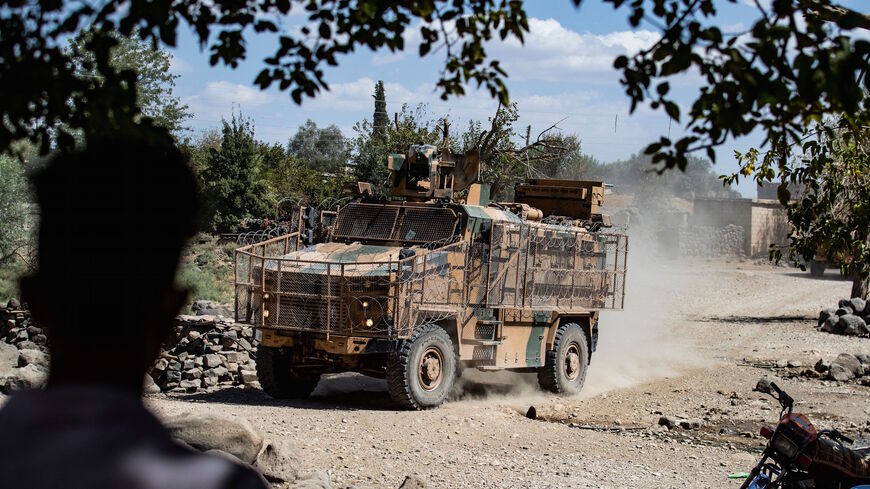 Turkish and Russian military vehicles patrol in the countryside of Rumaylan (Rmeilan) in Syria's northeastern Hasakah province near the Turkish border, on Sept. 16, 2021. - DELIL SOULEIMAN/AFP via Getty Images

ISTANBUL — Two years since its last Syria incursion, Ankara is hinting at a new cross-border military operation in response to a spate of attacks near its southern border, one of which killed two Turkish police officers Sunday.

In a press conference Wednesday, Turkish Foreign Minister Mevlut Cavusoglu said the nation would “do what is necessary for its security,” saying Turkey would seek to clear border areas of US-backed Syrian Kurdish militants with the People's Defense Units (YPG), which Ankara considers a national security threat and an offshoot of the outlawed Kurdistan Workers Party (PKK).

Commenting on recent attacks, Cavusoglu added the United States and Russia did not fulfill separate agreements established in 2019 that would oversee the YPG militia’s withdrawal from areas near the Turkey-Syria border.

“Both Russia and the US are also responsible for YPG/PKK attacks on Turkey, as they have not fulfilled their promises,” Cavusoglu said Wednesday.

The statements echoed a similar pledge by Turkish President Recep Tayyip Erdogan Monday, who said the weekend attack was “the final straw” and Turkey was “determined to eliminate threats arising from Syria.”

In separate incidents Monday, the Interior Ministry said mortar shells fired from a YPG-controlled area landed in Turkey’s southeastern Gaziantep province, with one hitting the Syrian district of Jarablus.

After three separate cross-border military operations, Turkey controls large areas of northern Syria with allied Syrian rebel groups, including Idlib where more than 3.4 million Syrian civilians have taken refuge from Syrian regime forces in a 10-year-old civil war that has compartmentalized the country.

Following this week’s attacks near the Syrian border, Oytun Orhan, Levant studies coordinator at the Center for Middle Eastern Studies in Ankara, said a new Turkish offensive might seek to expand the Peace Spring area, and Erdogan’s statements Monday should be taken as “serious.”

“I think we are experiencing a similar process to what we have seen before Turkey’s previous cross-border operations in Syria,” Orhan told Al-Monitor.

Noting offensives in Syria’s Kobani region might spur international backlash, Orhan said the most likely areas for Turkish military operations include Tel Rif'at as well as areas between Amuda and Darbasiyah along the Turkish border, with aims to expand the Peace Spring “safe zone” to the same 30-kilometer depth along Syria’s M4 highway.

“Turkey’s ultimate goal east of the Euphrates is to control the whole Syrian border,” Orhan added.

An estimated 900 US troops remain in eastern Syria, where their presence has largely restrained Turkish military operations, said Berkay Mandiraci, a Turkey analyst for the International Crisis Group. Ankara has also remained frustrated by a lack of progress on US and Russian promises to remove YPG-linked forces from border areas.

In an Oct. 7 letter, US President Joe Biden extended a Trump administration national emergency executive order on Syria, writing Turkey’s operations in the nation’s northeast undermine campaigns to defeat remaining Islamic State militants in the region and continue “to pose an unusual and extraordinary threat to the national security and foreign policy of the United States.”

Mandiraci said power circles in Ankara appear to have read the letter as a signal that US policy on Syria will not change anytime soon.

“The move may also have emboldened PKK and YPG cadres on the ground who feel increasingly squeezed by the Turkish military, especially in northern Iraq,” Mandiraci told Al-Monitor. “We may see more tensions in Syria and Iraq between Turkey, the PKK and its affiliates in the months ahead.”

The developments come as Ankara seeks to purchase 40 US-made F-16 fighter jets and about 80 modernization kits for its existing fleet amid ongoing pressure from Washington to ditch Russian-made S-400 missile defense systems it acquired in 2019, which has culminated in an informal ban on some US weapon sales to Turkey.

With US-Turkey relations tense, the F-16 deal along with prospects for a new Syria incursion will likely remain high on the agenda for a planned meeting between presidents Erdogan and Biden on the sidelines of the G20 Summit in Rome later this month.

“We underscore the importance of maintaining cease-fire lines and halting cross-border attacks,” Price added in his statements.

"You are providing them with arms and then making a statement for show only. The insincerity is obvious there," Cavusoglu said, referring to the United States.