There is speculation about a secret deal between Ankara and Baghdad eyeing a contiguous, 30-kilometer-deep buffer from Syria to Iraq. 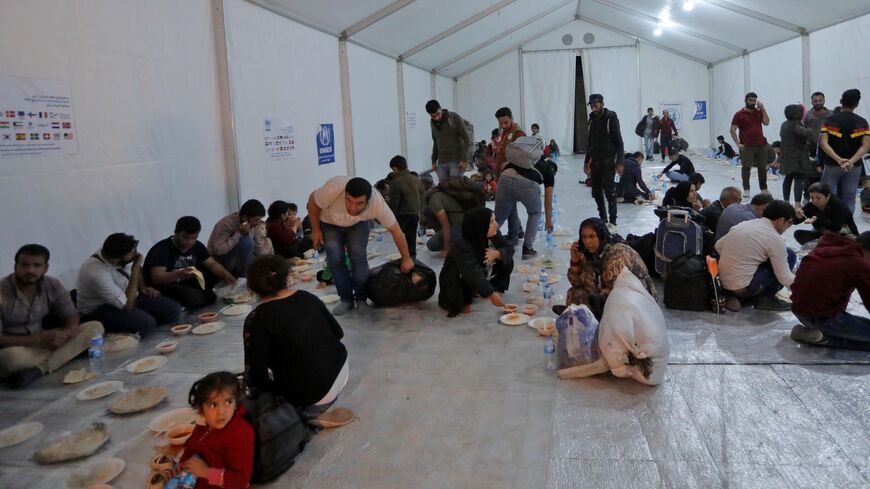 Syrians who have been recently turned refugees by the Turkish military operation in northeastern Syria share a meal in a large tent upon arriving at the Bardarash camp, near the Kurdish city of Dohuk, in Iraq's autonomous Kurdish region, on Oct. 20, 2019. - SAFIN HAMED/AFP via Getty Images

Turkey’s fresh military operation against Kurdish militants in northern Iraq, under way since April 18, has sparked debates in the Iraqi parliament over claims of a secret deal between the two countries, allowing Turkish troops to advance 30 kilometers (18.6 miles) inside Iraq.

Either way, Turkey’s military operations in Iraq and Syria point to an integrated approach in the northern strips of the two countries. The Kurdistan Workers’ Party (PKK), which Ankara lists as a terrorist group, has long maintained bases in the mountains of Iraqi Kurdistan along the border, and is linked to armed Kurdish groups in both Syria and Iraq.

In Syria, Turkey has pursued a safe zone scenario aimed at curbing the control of Kurdish forces in favor of allied Syrian rebels and laying the ground for the return of refugees. Turkish-controlled buffers and pockets have emerged at depths of 30 to 40 kilometers, with the M4 highway becoming a de facto frontier. While operations Euphrates Shield and Olive Branch targeted areas to the west of the Euphrates, Operation Peace Spring in 2019 sought to extend the Turkish-controlled border strip east of the river all the way to the Iraqi border, but Turkey had to make do with controlling the Tell Abyad and Ras al-Ain areas only.

Yet, the recent increase in Turkish attacks against the Kurdish-led Syrian Democratic Forces (SDF), taking advantage of Russia’s preoccupation with Ukraine, show that Ankara is bent on its “safe zone” plan.

In Ankara’s view, the 1998 Adana accord with Syria gives Turkey the right of hot pursuit against terrorist groups to a depth of 5 kilometers (3 miles) inside Syria. Extending this to 30 kilometers is allegedly among the normalization terms that Ankara has recently proposed to Damascus. Since Russia’s invasion of Ukraine, Ankara has closed its airspace to Russian flights to Syria in what could be a move to turn up pressure on Damascus and extract a green light from Russia to reinforce the map that President Recep Tayyip Erdogan has in mind.

Turkish and Syrian intelligence officials have reportedly met in Moscow after Ankara’s reconciliation message to Syrian President Bashar al-Assad. Turkish Foreign Minister Mevlüt Cavusoglu said last week that Ankara could engage with Damascus on refugees and terrorism without recognizing the Assad government, as it does with the Taliban in Afghanistan. The minister stressed that in “recent days” Syrian government forces were “seriously” fighting the People’s Protection Units (YPG), the backbone of the SDF, which Ankara equates with the PKK. “We support Syria’s territorial integrity, and the YPG-PKK have a plan to divide Syria,” he said.

Essentially, Ankara’s approach to Damascus is conditioned on a joint objective to undo the de facto Kurdish self-rule in northern Syria. In the Sochi deal with Moscow that ended Operation Peace Spring, Ankara had secured a concession requiring the YPG to withdraw up to 30 kilometers deep into Syria.

Are Turkey’s moves in northern Iraq based on the same concept of a security strip that it has sought to create in Syria?

The geographic and political conditions in Iraq are completely different. At face value, Turkey’s Operation Claw in Iraqi Kurdistan territory, unfolding in phases since mid-2019, aims to purge PKK bases in the region. According to Defense Minister Hulusi Akar, the latest phase, called Operation Claw-Lock, seeks to block the PKK’s remaining routes to the Turkish border. “Once Zap is cleansed, the border will be locked. There will be no uncontrolled crossings,” he said.

Turkey has sought to expand a web of bases and checkpoints across the border in areas such as Hakurk, Haftanin, Metina, Zap and Avashin-Basyan, home to long-standing PKK camps. The latest thrust has focused on Zap, Metina and Avashin-Basyan.

The growing number and permanence of Turkish bases has fueled political wrangling in Baghdad. During an April 24 parliamentary debate, Iraq’s First Deputy Parliament Speaker Hakim al-Zamili urged the foreign minister to explain what measures Iraq had taken against the attacks and clarify claims about an agreement allowing Turkish forces to advance 30 kilometers into Iraq.

An Iraqi Foreign Ministry spokesman denied the existence of a secret deal, saying that Turkey’s incursions lacked any legal ground, even as Ankara cited the UN Charter’s Article 51 on self-defense.

A Turkish diplomatic source told Al-Monitor that debates over agreements are meaningless because the central government in Baghdad has become “void and incapable” in the north. Ankara had initially based its cross-border operations on a 1984 security protocol with Iraq, but that policy has changed, with Ankara using arguements such as national security, self-defense and fighting terrorism and seeking the tacit consent of the Kurdistan Regional Government (KRG) and Baghdad, the source explained.

KRG President Nechirvan Barzani and Prime Minister Masrour Barzani had both visited Ankara prior to the launch of Operation Claw-Lock.

The diplomatic source said the PKK had taken advantage of Baghdad’s loss of control in the north since the early 1990s and Ankara has been using this to expand its operations. According to the source, accords are now taking shape in the form of “unwritten, unspoken and silent” agreements between forces on the ground. The source noted that the more the PKK has moved south into Iraq, the more Turkey’s operations have deepened, and depth limits such 5 or 10 kilometers have become irrelevant, with Turkey using drones and expanding its web of control.

Besides targeting the PKK’s camps along the border, Turkey has repeatedly hit targets in Sinjar, some 160 kilometers away, as well as Makhmour, 218 kilometers south of the border, employing F-16 jets and armed drones.

Turkey had secured Baghdad’s consent in cross-border operations in 1983, 1986 and 1987. A security protocol signed in October 1984 allowed the two sides to conduct cross-border operations at a depth of up to 10 kilometers for three days at most, Iraqi officials said at the time. According to other sources, the protocol allowed Turkish troops to go 5 kilometers deep into Iraq without prior permission from Baghdad. The protocol is no longer valid because the two sides failed to renew it in 1988.

Turkey resumed the operations in 1991 without Baghdad’s consent, because Baghdad lost control of the north after the first Gulf War. In 2017, after Turkish jets bombed Sinjar, Ankara cited Article 51 of the UN Charter, which has become its legal justification since then.

According to Turkish media reports, “the Turkish troops, which have secured control in Haftanin, Metina, Avashin and Hakurk in the previous Operation Claw stages, will now cleanse Zap, the last link, to complete a security barrier at a depth of 25-30 kilometers from the border.”

For Serhat Erkmen, a Turkish academic specializing on terrorism, Turkey’s military operations in Iraq and Syria have different objectives. The one in Iraq is aimed mainly at purging PKK-controlled areas, while those in Syria rest on the notion of a safe zone, he told Al-Monitor.

According to Erkmen, “Operation Claw-Lock differs from previous operations for two main reasons. First, it would completely cut the PKK off from the border. The group’s ability to move and harass Turkey by infiltrating the border strip is becoming history. Second, the operation is taking place in a narrower area but in a tougher terrain, which makes it more difficult.”

The Kandil mountains on the Iraqi-Iranian border, where the PKK leadership is based, are — for now — outside the scope of the operation. Meanwhile, the Yazidi-populated Sinjar region, where Turkey has targeted the PKK-linked Sinjar Resistance Units, has witnessed the return of central government forces.

According to Erkmen, large-scale Turkish military moves in Sinjar and Kandil are unlikely at present. “Any serious step in Sinjar depends on a significant government change in Baghdad. Until then, there could be mostly surgical strikes against critical [PKK] elements in the region,” he said. “As for Kandil, it will be the ultimate stage. … That ultimate stage might be reached in three or four years. Of course, these are scenarios based on the current status quo in Iraq and Syria,” he added.

For Erkmen, Iraqi denunciations of Turkey’s operations are “standard reactions,” but the incursions do impact domestic politics in Iraq. “For instance, pro-Iranian militia have serious concerns regarding the government formation process in Iraq. It’s no secret that there is a dialogue between anti-Iranian groups and Turkey,” he said. "The operations have been effectively strengthening the influence of [the Barzanis’] Kurdistan Democratic Party, a key actor both in the Iraqi government formation process and the elections due in the KRG this year.”