How realistic is Erdogan’s vision for security belt from Syria to Iraq?

Turkish President Recep Tayyip Erdogan says he is bent on creating an “end-to-end” security belt along Turkey’s southern borders with Syria and Iraq — a vision too ambitious given the political and topographic conditions of the areas in question. 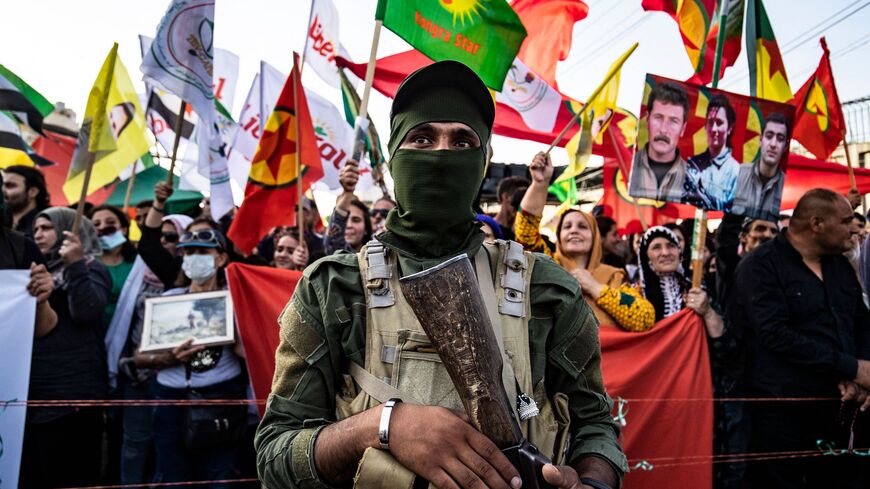 Syrian Kurds demonstrate on June 10, 2021, in the northeastern Syrian city of Qamishli against the Turkish offensive on PKK areas in northern Iraq. The PKK maintains rear bases in northern Iraq, which have come under renewed assault by Turkish forces since April. - DELIL SOULEIMAN/AFP via Getty Images

Following his reconciliation offer to Syrian leader Bashar al-Assad, Turkish President Recep Tayyip Erdogan is trying to soften the climate with Damascus on the one side while insisting on his plan for a safe zone along the border on the other.

Speaking at a ceremony Aug. 25, Erdogan for the first time publicly outlined a safe zone that links Syria and Iraq to counter the threats that Turkey perceives from armed Kurdish groups in its two southern neighbors. “We will not stop our struggle until we secure our southern borders from end to end with a corridor extending to a depth of 30 kilometers (19 miles),” Erdogan declared, vowing that Turkey’s military operations would continue “according to its own planning.”

His remarks seemed to also reflect anger with the conditions raised in response to his overtures to Damascus, namely that Turkey should withdraw its troops from Syria and end support for armed rebel groups in the country.

The Kurdistan Workers Party (PKK), which Ankara lists as a terrorist group over its nearly four-decade armed campaign in Turkey, has long maintained bases in the rugged mountains of Iraqi Kurdistan along the Turkish border and is linked to the People’s Protection Units (YPG), the armed group at the forefront of the Kurdish autonomy drive in northern Syria.

Turkey’s quest for a 30-kilometer-deep security belt in Syria has been in the open since 2019. In Iraq, its long-running pursuit of the PKK has seen an expanded territorial control in recent years, with no explicit boundaries set. Now, Turkey appears to be moving to a new stage linking its objectives in Iraq and Syria.

In light of the fence-mending prospect with Damascus, Erdogan is drawing the framework of his main terms for peace. In a sense, he says that Turkey will reserve a right to maintain control in a 30-kilometer-deep strip along the border or conduct military operations there even if it withdraws from Syria until its concerns are met. This vision is likely to be on the negotiating table should Ankara and Damascus agree to revise a 1998 security deal known as the Adana Accord, which Moscow has been touting as a basis for reconciliation between the two neighbors.

The Adana Accord was signed in October 1998, shortly after Damascus forced PKK leader Abdullah Ocalan to leave his long-time safe haven in Syria under Turkish pressure. In Turkey, the accord was interpreted to grant the right to pursue the PKK to a depth of 5 kilometers (3 miles) inside Syria. The Syrians have rejected that, raising doubts on how willing they will be to accept the 30-kilometer term.

The Adana Accord required Syria to shut down PKK camps and end all PKK activities on its territory, try or hand over captured militants, and prevent PKK members from traveling to other countries via Syria. The two sides agreed to set up a direct phone link and working groups to outline measures against the PKK.

The publicly available text of the accord entails no provision granting Turkey the right to go 5 kilometers deep into Syria. It is attributed to a secret clause, which was referenced in a letter that Turkey’s Foreign Ministry sent to the European Commission to inform it of the deal. The letter, dated Oct. 22, 1998, cites an annex to the accord, according to which “the Syrian side understands that its failure to take the necessary measures and security duties, stated in this agreement, gives Turkey the right to take all necessary security measures within 5 km deep into Syrian territory.”

Yet the deal was not mutually ratified to become an interstate accord and the two sides signed an Agreement on Joint Cooperation Against Terrorism in December 2010. The agreement, which took effect in April the following year, required Syria to prevent the PKK from using its territory, including for recruiting militants and acquiring weapons and financial resources, but again failed short of entitling Turkey to unilateral interventions. The relevant article only says that the two sides “will explore opportunities for joint operations if the need arises.”

Since the start of the Syrian civil war, the only time Turkey managed to put the 30-kilometer term on record was in a deal with Moscow, not Damascus. The 2019 deal called for the removal of the PKK-linked YPG forces to a depth of 30 kilometers from the Turkish border in northeastern Syria.

For Damascus, Turkey’s military presence in Syria is a fundamental obstacle to reconciliation. Syrian journalist Sarkis Kassargian believes a Turkish withdrawal could encourage Damascus on providing security guarantees and expanding the Adana Accord. As of now, Turkey has yet to pass the confidence threshold, Kassargian told Al-Monitor, citing assessments at the Syrian Foreign Ministry.

According to the journalist, Ankara’s overtures are widely seen as maneuvers to boost Erdogan’s electoral fortunes ahead of elections next year. “Nobody in Damascus believes that Turkey intends to withdraw. Hence, its withdrawal and ending support for armed groups is a precondition. Damascus will not engage in dialogue unless Turkey withdraws,” Kassargian said. He quoted Syrian officials as saying, “Concrete steps are needed so that we can trust [Turkey]. Withdrawal and ending support for terrorists are the most important steps. Other issues could be negotiated afterward.”

According to Kassargian, “Damascus will not acquiesce to Turkey’s military presence. If its conditions are met, an eventual new accord might well cover the 30-kilometer-deep strip. What matters the most is to get Damascus’ approval and coordinate everything with it.” Second, the two sides have to be on the same page on who is a terrorist so that Damascus could agree to Turkish operations, he said, stressing that the YPG and the YPG-led Syrian Democratic Forces are not viewed as terrorist groups by Damascus.

As for a potential new Turkish military campaign in northern Syria, Kassargian said the Syrian government was unlikely to leave such a move unanswered, no matter what position Russia takes.

The Syrian Kurds, for their part, worry about a Turkish-Syrian rapprochement based on the aim of dismantling their de facto autonomy in the north, though few expect Damascus to start a war on the Kurds for the sake of reconciliation with Ankara.

In Iraq, meanwhile, anger with Turkey’s operations has been growing, as was seen after the recent massacre in a tourist retreat, amid questioning on whether Ankara was quietly given a green light to go to depths of 30 kilometers inside Iraqi Kurdistan.

Since 2017, Ankara has been citing the UN Charter’s Article 51 on self-defense to justify its military actions on Iraqi territory. Earlier, a 1984 security protocol with Iraq allowed for cross-border operations — to a depth of 10 kilometers according to some and 5 kilometers according to others — before it expired in 1988. Ankara has not sought Baghdad’s consent for cross-border operations since 1991, unlike it did in the 1980s.

Turkey’s Operation Claw Lock, unfolding in phases in the past several years, has seen the expansion of four webs of Turkish military bases on Iraqi Kurdistan territory. Military outposts have been established on dominating hilltops in the border areas of Haftanin, Metina, Avashin and Hakurk, home to long-standing PKK camps, but the militants are said to be still present in deep valleys in the mountainous region.

According to Kurdish journalist Omer Kurtgozu, who has worked in Kurdistan, the PKK has changed its deployment strategy and begun to move in small groups in response to the Turkish military establishing about 40 base grounds and taking control of strategic hilltops over the past several years. “The PKK is now using the valleys, which are difficult to control,” Kurtgozu said.

Erbil-based political analyst Siddik Hasan Sukru concurred. He maintained that Turkey launched the operations after an agreement with the Kurdistan Democratic Party (KDP), the dominant political force in Iraqi Kurdistan, in 2018. Though the Turkish forces have taken certain areas under control and expanded their bases, they “cannot dominate the mountainous areas and the border strip,” Sukru said. “No one has been able to rule over that region throughout history. Setting up bases doesn’t mean that the PKK is gone and the mountainous areas are under control.”

Referring to the KDP’s close ties with Ankara, he added, “The conjuncture in Kurdistan is favorable to Turkey, unlike the one in Syria. Still, Turkey has failed to get results.”

An Ankara-based security analyst who wished to remain anonymous argued the operations could yield results, even though he saw Erdogan’s latest outburst as politically motivated.

Referring to the nearly 4 million Syrian refugees in Turkey, he said Erdogan was under growing popular pressure “to resolve the refugee issue, whether he speaks to Damascus or not.” Nevertheless, he argued, Ankara is without a plan. “The relevant institutions have done no work on the safe zone. In fact, few people in those institutions view Iraq and Syria from the same security perspective. The institutions differ in their approaches. That’s why I see Erdogan’s statement as political,” he said.

According to the analyst, the viability of the security belt in Erdogan’s mind depends on cooperation with official authorities on the other side of the border. In Iraq, the KDP has displayed partnership but lacks the power to secure such a strip from the south. As for the Qandil Mountains along the Iraqi-Iranian border, where the PKK leadership is based, Ankara could hardly rely on cooperation from Tehran. And in Syria, everyone is opposed to the plan.

Yet the analyst argued that an expansion in line with the plan was possible in Iraq in a year or two, albeit not to equal depths from the border. “Turkey does not face obstructive domestic or international reactions in Iraq, unlike in Syria. The difficulties in Iraq are operational. The [PKK] has been taking advantage of the topography, protracting the process,” he said. “In Syria, big states are involved and time is not on Turkey’s side. Reconciliation between Damascus and Ankara could pave the way for cooperation with both diplomatic and military aspects. But everything is at the level of rhetoric still and is likely to remain so for some time,” he added.