Will Adana accord take Erdogan to Damascus?

Drawing on a controversial 1998 accord between Ankara and Damascus, Russia wants to get Turkey on board with its game plans for Syria and beyond, including energy in the eastern Mediterranean. 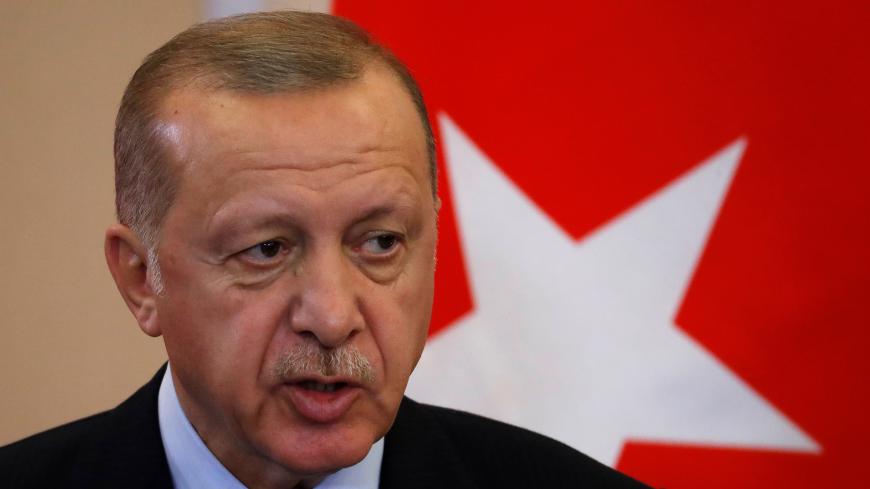 As Operation Peace Spring placed another territory in northern Syria under Turkish control, a crucial question under debate is whether Ankara could restore ties with Damascus on the basis of the 1998 Adana accord, referenced in the deal that Turkey agreed with Russia last week.

The Adana accord, which lay ground for security cooperation between Turkey and Syria, was first brought up by Russian President Vladimir Putin when he hosted his Turkish counterpart Recep Tayyip Erdogan in Moscow in January. Putin’s original aim was to stave off Turkey’s plans to create a buffer zone with the United States to the east of the Euphrates River. Ultimately, Putin’s proposal to employ the Adana accord was enshrined as a commitment in the memorandum of understanding that he and Erdogan hammered out Oct. 22 in Sochi. According to the fourth point of the memorandum, “Both sides reaffirm the importance of the Adana Agreement. The Russian Federation will facilitate the implementation of the Adana Agreement in the current circumstances.” A broad interpretation of the Adana accord was used also as a legitimizing basis for joint Russian-Turkish patrols in the west and east of the area of Operation Peace Spring with a depth of 10 kilometers (6.2 miles).

Yet, Erdogan’s perspective of the Adana accord seems to differ from that of Putin. While Putin brought it up in a bid to prevent a Turkish-US partnership, push back Turkey’s military presence to as close as five kilometers (three miles) from the border — it reaches 55 kilometers (34 miles) into the al-Bab area at present — and ultimately normalize ties between Ankara and Damascus, Erdogan has presented the deal as a document legitimizing Turkish military interventions in Syria. Moreover, Ankara argues that the Syrian regime has been failing to meet its obligations under the Adana accord and that intervention has become inevitable. Damascus, for its part, sees any Turkish military presence as invasion and occupation.

The parties’ intentions aside, the content and applicability of the Adana accord are rather contentious.

Turkey and Syria signed the deal in the southern Turkish city of Adana on Oct. 20, 1998, 11 days after Abdullah Ocalan, the leader of the Kurdistan Workers Party (PKK), was forced to leave his longtime safe haven in Syria. Under the accord, Damascus committed to recognizing the PKK as a terrorist group, shut down PKK camps and prohibit all PKK activities on its soil, try or hand over captured PKK militants and prevent PKK leaders from using its territory to travel to other countries. The two sides also agreed to set up a direct phone link, working groups and joint mechanisms between security authorities to outline measures against the PKK.

The publicly available text of the accord entails no provision that allows Turkey to go five kilometers deep into Syria. Turkish politicians and pundits claim the right stems from a secret provision that the two sides have withheld from the public. The only relevant document to have emerged so far is a letter dated Oct. 22, 1998, that Turkey’s Foreign Minister Ismail Cem sent to the president of the European Commission to provide information about the deal. The letter, a copy of which has been seen by this reporter, cites an “annex 4” to the accord, according to which “The Syrian side understands that its failure to take the necessary measures and security duties, stated in this agreement, gives Turkey the right to take all necessary security measures within 5 km deep into Syrian territory.”

Another contentious point is whether the deal is technically an agreement or a declaration of intent. The deal, signed by the deputy undersecretary of the Turkish foreign ministry, Ugur Ziyal, and Syria’s head of political security affairs Maj. Gen. Adnan Badr Al-Hassan, has not been ratified by the respective governments or parliaments to gain the formal status of an interstate agreement. Some observers see the document as merely the minutes of a meeting.

Another more formal document, however, exists between the two countries: the Agreement on Joint Cooperation Against Terrorism and Terrorist Organizations, signed Dec. 21, 2010, by Turkish Foreign Minister Ahmet Davutoglu and his Syrian counterpart Walid Muallem to further the Adana accord. The 23-article agreement took effect on April 26, 2011, following governmental and parliamentary approval, thus replacing the Adana accord. The agreement had a validity period of three years, renewed automatically unless either side pulls out, but with the breakout of the Syrian conflict, it became irrelevant. Moreover, Turkey’s border policy allowed for the passage of arms and militants to Syria, fostering the uprising. In Damascus’ point of view, it is Turkey that has flagrantly violated the agreement in the past eight years.

Much like the Adana accord, the agreement requires Syria to prevent the PKK and its extensions from using its territory to set up camps, training centers and other facilities; stop them from recruiting militants and acquiring weapons; and prevent the financing of terrorism through smuggling and trade. Yet it does not entitle Turkey to unilateral interventions. Referencing the Adana accord, the agreement envisions the establishment of joint mechanisms and working groups. Article 7 says the two sides “will explore opportunities for joint operations if the need arises.”

In sum, both the Adana accord and the 2010 agreement require coordination between the two sides regarding measures on the border. And this is what the Russians are aiming to achieve: to get Ankara to talk to Damascus, establish contacts and work together. This means making peace with Damascus.

The Adana accord targeted the PKK, and adapting it to the Syrian Kurdish People’s Protection Units (YPG) is a contentious issue as well. Damascus may have recognized the PKK as a terrorist group under the Adana accord, but it does not view the YPG in the same way, an attitude shared by Moscow. Although the Syrian government has called the YPG “separatists” over the group’s partnership with the United States, it does not rule out the prospect of integrating the YPG into its military in potential Russian-mediated talks.

Adapting the 2010 agreement to the current situation is a similarly open question. Ankara and Damascus have conflicting views of the crisis and how to resolve it. According to Article 19, any disagreement on the interpretation and implementation of the agreement is to “be resolved amicably through direct negotiations between the two sides, without resorting to a third party.” Thus the agreement stipulates dialogue without mediation by third party such as Russia.

The Syrian government’s policy on the Adana accord has been one of neither denial nor acknowledgement. After Putin brought up the accord in January, Damascus conditioned the activation of the deal on “making the situation on the borders the way it used to be before between the two countries and the Turkish regime abiding by the agreement and stops supporting, financing, arming and training terrorists and withdrawing its military forces from the Syrian territories they are occupying.” Could Damascus show flexibility in light of the latest developments? Maybe, but there is no sign of it yet.

The Russians appear well aware of the issues snagging the implementation of the deal, which they say needs to be updated.

Turkish political scientist and Russia expert Aydin Sezer told Al-Monitor, “The real issue here is not the accord itself, but Russia referencing the accord in order to normalize ties between Ankara and Damascus.” According to Sezer, “Russia wants to promptly reconcile Erdogan and [Syrian President] Bashar al-Assad so as to curb Iran’s influence” in Syria.

By referencing the accord, he argued, Russia aims not only to ensure the Syrian army’s return to the border, but also to get Turkey on board with its plans for Syria’s reconstruction as well as energy projects in the Mediterranean Sea.

Sezer said, “We are a more convenient partner for Russia. In terms of Syria’s reconstruction, Russia’s hand is very strong politically, but it could do little without using Turkish contractors and products. Hence, it keeps dangling this carrot. Russia can compete with China only with Turkey. So it will try to get Erdogan to focus on such opportunities in the coming period and show them as a way out for the crisis-hit Turkish economy. That’s why it is paving the way for reconciliation with Assad, who has now returned as our neighbor to the east of the Euphrates as a result of the Sochi deal.”

Pointing to the heating competition over energy resources in the eastern Mediterranean involving long-divided Cyprus and the nuclear power plant the Russians are building in Akkuyu on Turkey’s Mediterranean coast, Sezer said, “Russia aims to use its clout in Syria to expand its area of influence in the eastern Mediterranean. And in the framework of the port and maritime privileges it has received from Turkey for the Akkuyu nuclear power plant, Russia aims to develop regional cooperation between Turkey and Syria. Prospective gas and oil exploration with Turkey constitute the carrot here.”

He further noted, “Russia is irked by the Western presence in Cyprus. And in the energy field, it is trying to prevent competition from the eastern Mediterranean. With both the Blue Stream and TurkStream pipelines, Turkey is a very reliable partner in this regard.”

Turkey’s opposition parties also believe the Adana accord could be a convenient tool to pave the way for reconciliation with Damascus and extricate Turkey from its Syrian quagmire, so they are encouraging the government to follow this path. And although Erdogan has not completely broken from the US-NATO game plan despite the Sochi deal with Putin, the parties might eventually sit at the negotiating table starting off with the Adana accord but leaving with a new deal that addresses the current state of affairs.