Turkey at odds with US and Russia over northern Syria

As Ankara loses ground in Idlib, President Erdogan’s threat of military action east of the Euphrates raises the stakes for Turkey. 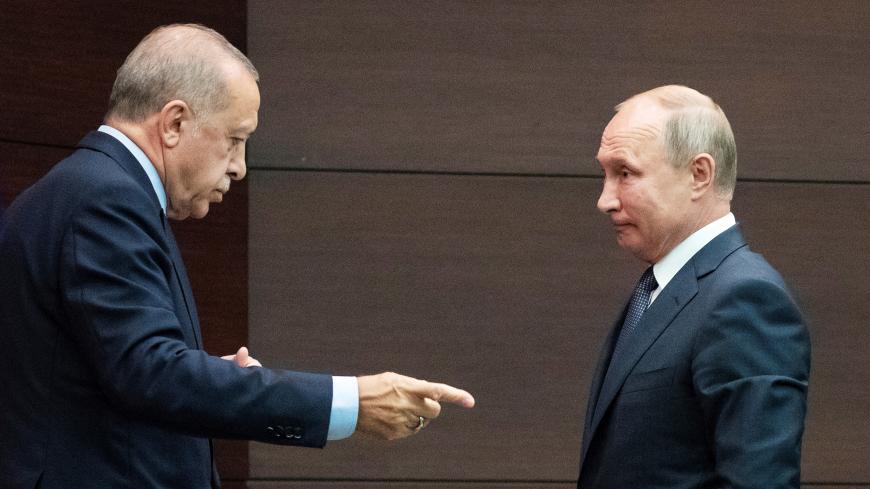 There was no indication, however, that the meeting — which took place under what has come to be known as the “Astana process” — produced a breakthrough in Idlib.

The Astana process, which was launched in 2017, and the subsequent agreement between Erdogan and Putin in Sochi in September 2018 have failed to halt the regime’s Russian-backed advances in Idlib province.

Another influx of refugees from the region, and the possibility of jihadis entering Turkey as refugees are threats that await Turkey if Ankara and Moscow fail to agree on the future of Idlib.

Many Turkish analysts, including some close to the government, were skeptical before the Ankara talks that such an arrangement could be secured at this stage of the conflict.

Most believe that Moscow and Damascus are set on pushing the Sunni opposition from the province altogether, without differentiating between moderates and jihadis.

“It is difficult to resolve the Idlib situation with Moscow through discussions at this state,” argued Murat Yesiltas, from the government-funded SETA Foundation in Ankara.

“Russia and the regime aim to leave the opposition landless and to complete the military phase of the Syrian civil war victorious,” Yesiltas wrote in the pro-government daily Sabah.

The lack of a common understanding among the Astana partners over Idlib was also apparent during the joint press conference of the three leaders in Ankara.

Putin’s remarks, in particular, showed that Russia’s position remains unchanged, regardless of Turkey’s demand that operations in the province stop.

Moscow maintains that these operations are legitimate and claims that they only target terrorist groups — starting with Hayat Tahrir al-Sham (HTS) — which, it says, are not a part of the Sochi agreement.

“Today we mainly discussed combating terrorism in Syria. The situation in Idlib is a source of concern,” Putin said. “This region [Idlib] is almost totally under the control of groups that are related to al-Qaeda. We cannot remain silent in the face of this.”

Putin’s remark can also be read as an indirect criticism of Turkey. Moscow has complained on multiple occasions that Ankara failed to rein in HTS as it was tasked to under the Sochi agreement.

A few days before the Ankara meeting, Russian Foreign Minister Sergey Lavrov declared the war in Syria over, except in Idlib and the northeast of the country held by the US-supported Kurdish People’s Protection Units (YPG).

“Separate hotbeds of tension only remain on the territories uncontrolled by the Syrian government, for example, in Idlib and the eastern bank of the Euphrates,” Lavrov told the Russian daily Trud.

Such remarks fly in the face of Turkey’s argument that the regime is only using the excuse of fighting terrorism in Idlib to gain control over the entire province. Russia, however, never made it a secret that it intends to see the regime take control of Idlib.

Turkey hoped to secure a military foothold in the region with the 12 military observation posts it established there under a 2018 agreement with Russia for “de-escalation zones.”

However, as the regime pushes farther north, the future of these observation posts, one of which has already come under attack, remains in the balance.

During his visit to Moscow in August, Erdogan was assured that such attacks by the regime would be prevented in the future. However, al-Masdar al-Arabi reported Sept. 16 that the Syrian army had launched fresh attacks in southern Idlib that targeted several sites near a Turkish observation post.

“This near-miss by the Syrian Arab Army marks the second time in five days that their troops almost hit a Turkish observation post,” al-Masdar al-Arabi wrote.

Turkey has said it will respond to any direct attacks, but its military position in Idlib looks increasingly precarious as the regime continues its push northward with Russian ground and air support.

Rouhani’s position on Idlib was also ambivalent in Ankara. During the press conference, he also stressed that there were terrorist groups that had established a strong presence in parts of the province.

“We have to combat terrorists and help the Syrian regime,” Rouhani said.

Rouhani added that the Adana accord for border security, signed by Ankara and Damascus in 1998, could help Turkey secure its border.

This idea, which Putin first floated some months ago, requires Ankara to normalize ties with Damascus. Erdogan continues to see Bashar al-Assad as one of his regional archenemies and remains opposed to this idea, despite calls at home for establishing ties with the Syrian regime.

The common ground the three leaders found in Ankara was the situation east of the Euphrates. They used the occasion to hit at the US military presence there and to stress the need for preserving Syria’s territorial integrity.

In remarks — which some argue could rebound on Turkey in the future — Rouhani said countries that had not been invited by Damascus should leave Syria.

Turkey has demanded — to no avail — that Washington sever its ties with the YPG and disarm the group. Ankara says the YPG is a Kurdish terrorist organization that threatens Turkey’s security.

Washington acknowledges Turkey’s right to secure its border against attacks and has agreed in principle to Ankara’s proposal for a safe zone in northeastern Syria.

The devil, however, is in the details. There is no indication as yet that Washington has conceded anything regarding Ankara’s demand for a 30-kilometer-deep safe zone to be controlled exclusively by Turkey.

Last week, Turkey's pro-government press made much of the start of joint Turkish-US patrols in prospective safe-zone regions on Sept. 8.

Erdogan, however, remains wary. Many also see these patrols as palliative. Speaking only hours after the patrols began, Erdogan said that what Turkey wants and what the American side has in mind is not the same thing.

“It seems that our ally is looking for a safe zone for the terrorist organization, not for us. We reject such an understanding,” Erdogan told a gathering in Istanbul.

During his press conference with Putin and Rouhani in Ankara, Erdogan said Turkey would launch a military operation within two weeks to carve out the safe zone it needs if Washington refuses to meet its demands.

“I told our two friends [Putin and Rouhani] that we will be putting our own action plans into motion within two weeks if we can’t agree with the US,” Erdogan said.

Erdogan also said that at least 2 million of the 3.6 million Syrian refugees currently in Turkey would be settled in this zone, thus also revealing his urgent need to address Turkey’s growing Syrian refugee problem.

Erdogan plans to meet President Donald Trump at the end of this month, during the UN General Assembly, and clearly hopes the personal relationship between them will work to his advantage again.

Erdogan told Reuters last week that he had discussed with Trump over the phone the possibility of Turkey’s buying Patriot missiles from the United States. Turkey’s purchase of Russian made S-400 air defense systems antagonized Washington, which is still threatening to impose sanctions on Ankara.

Trump, however, has displayed understanding for Erdogan’s position. He claims that the Obama administration left Ankara with no choice but to buy the S-400 because it refused to sell Patriot missiles to Turkey.

Trump has also prevented sanctions against Turkey under the Countering America's Adversaries through Sanctions Act for its S-400 purchase. He has also expressed regret about Turkey’s expulsion from the F-35 fighter jet program because of its S-400 purchase, saying this has cost Americans jobs.

According to a Western diplomat, Erdogan is trying to force Trump into also taking a favorable position on Turkey’s demands in Syria.

“Trump has emboldened Erdogan, who is using the Patriot issue now to play on Trump’s pragmatic businessman side,” the diplomat, who wished to remain unnamed, told Al-Monitor.

“But it is not clear if Trump will remain favorable if Turkey goes into northern Syria to fight the YPG,” he added.

One way or another the situation across the whole of northern Syria will pose problems for Turkey’s ties with Russia and the United States alike.