Russia is tiring of Ankara's balancing act between Washington and Moscow, and Turkey's less-than-successful actions in Syria. 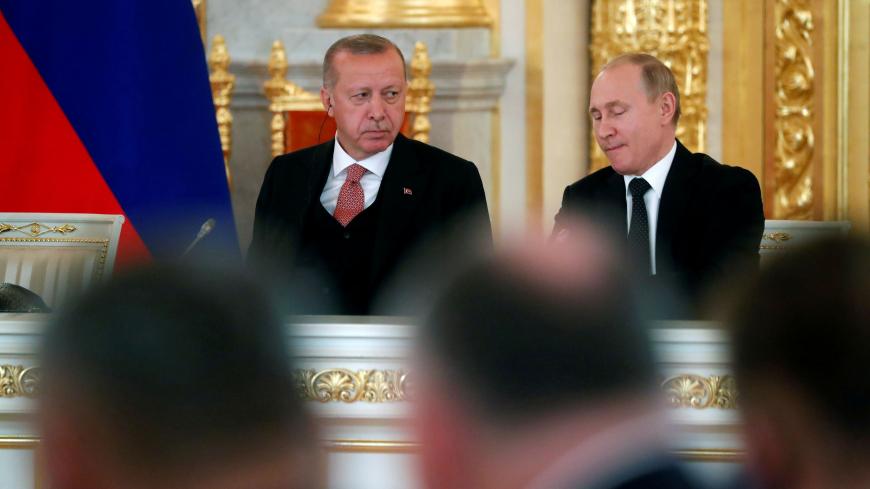 Moscow is increasingly concerned and restless over Turkey’s moves in northern Syria.

Russia’s active support of Syrian President Bashar al-Assad's Idlib offensive indicates Moscow thinks ongoing talks between Turkey and the United States over northeast Syria could lead to the balance of power shifting in Washington's favor. The Kremlin’s patience with Turkey’s balancing act between the two superpowers is wearing thin.

The military offensive against Syrian rebel forces is taking place in Idlib and northern Hama provinces. The area is home to more than 3 million civilians and some 50,000 Hayat Tahrir al-Sham (HTS) militants who took control of the regions from Syrian opposition factions in September. Russia has labeled HTS and its allies as terrorists from the outset and declares it will never tolerate them.

Ankara had initiated diplomatic action and indeed persuaded Russia to set up a demilitarized buffer zone between the rebel-held territories and regime-controlled areas under the Sochi deal reached Sept. 17. The deal also had foreseen reactivation of the critical M4 highway that links Latakia to Aleppo, and the M5 that connects Aleppo to Damascus.

All HTS elements were to leave the de-escalation zone before the end of 2018, but that didn't happen. Despite subsequent heavy air bombardment by Russia and intense diplomatic efforts by Turkey, the mostly local HTS fighters refused to demobilize or join Turkey-backed Free Syrian Army (FSA) factions.

In fact, HTS even expanded its presence in the region. The group, at one time linked to al-Qaeda, also increased its attacks on Russia's air base at Khmeimim in Latakia province and began threatening other vital Russian military bases there. This is when Russian air forces and the Syrian regime began their operation.

Given Ankara’s failures to keep its promises under the Sochi deal, Moscow is publicly supporting the advances of regime forces to southern Idlib, saying the time for a military solution has come.

However, two important developments came just after the air campaign on Idlib began. First, the intensity of the bombardment declined somewhat following an April 8 meeting in Moscow between Turkish President Recep Tayyip Erdogan and his Russian counterpart Vladimir Putin. Second, Russia decided to withdraw its forces from Tel Rifaat, just two days after the Erdogan-Putin meeting. Both moves are widely seen as goodwill gestures toward Turkey, indicating the Kremlin was willing to make some compromises to fend off Turkey’s objections over the Idlib offensive.

Yet the course of the events has shown that Turkey has exhausted Moscow's patience. Apparently, Ankara’s strategic balancing act between Russia and the United States has outlived its usefulness. As part of its strategy to clear Kurdish forces in the area stretching from the Tel Rifaat to Manbij, Turkey is trying to maintain warm relations with Russia to revive de-escalation efforts in Idlib and to continue its dialogue with the United States to establish a safe zone in Kurdish-dominated areas.

However, this strategy apparently has yet to satisfy the United States or Russia. The Idlib offensive is a clear signal of this failure. Metaphorically speaking, the Idlib offensive is Russia's way of telling Turkey that it won't allow Ankara and Washington to set up a new game in Syria without its consent.

Although some believe Assad is scheming to disrupt Ankara-Moscow relations through the Idlib operation, this seems to be an optimistic take on the current situation, as such an operation would have never begun without a green light from Russia.

It's telling that the timing of the offensive came as diplomatic negotiations between Turkey and the United States over the safe zone were intensifying. Also, some news outlets reported that the United States asked Turkey to delay its procurement of Russian S-400 missiles until the end of 2019, but Turkey denies any delay.

It’s difficult to estimate how strongly Putin would react to Ankara’s winking at Washington about Idlib for now, but news coming from the battlefield already indicates clashes have spilled toward areas where some of Turkey’s 12 observation posts are located.

On May 5, the Syrian army harassed the No. 10 observation post in the northwestern Hama town of Zawiya with artillery fire. Four Turkish soldiers were wounded in the attack. On May 12, Syrian regime forces opened fire on another observation post. Damascus has yet to make any official statements about whether they were accidental, so it's safe to say they were indeed intentional. It's also difficult to assume that two subsequent incidents occurred without Russia’a knowledge.

In addition to the attacks on the Turkish posts, clashes have also triggered a mass migration toward the Turkish border, fueling Ankara’s fear of a new refugee wave. Last week, the UN announced that the number of civilians fleeing the areas had reached 150,000. Civilian casualties in the previous two weeks exceeded 100.

Russia is stepping up its strategy of actively supporting the Syrian regime. And in case of an all-out Idlib offensive, a new refugee wave will not be Turkey’s only problem.

Thus, Erdogan called Putin on May 14 to express Turkey’s concerns over the situation, noting that regime forces were targeting schools, hospitals and civilians. Erdogan also blamed Assad for undermining efforts to set up a constitutional committee within the framework of the Astana peace talks led by Iran, Russia and Turkey.

Yet the Russian version of the conversation differed. The official statement only noted that the two leaders exchanged views on cease-fire violations of radical armed groups at Idlib.

The Syrian army’s advances will enable regime forces to gain control of the Aleppo-Latakia highway, and hence the whole area where Turkish observation posts are located. Being caught in the crossfire between the Syrian army on one hand, and opposition rebels and HTS militants on the other, is a real danger for some 200 Turkish soldiers serving at these outposts. If Moscow fully gives up on Turkey, Ankara will be forced to take one of two undesirable paths: abandon those three outposts or keep its soldiers there despite the increasing risks. But given the ongoing S-400 deal and other military cooperation between the two parties, the situation is far from there yet.