How can Russia, Turkey reach deal on Idlib?

In the run-up to the Turkish president's visit to Moscow, few options may be on the table with regard to Syria's Idlib. 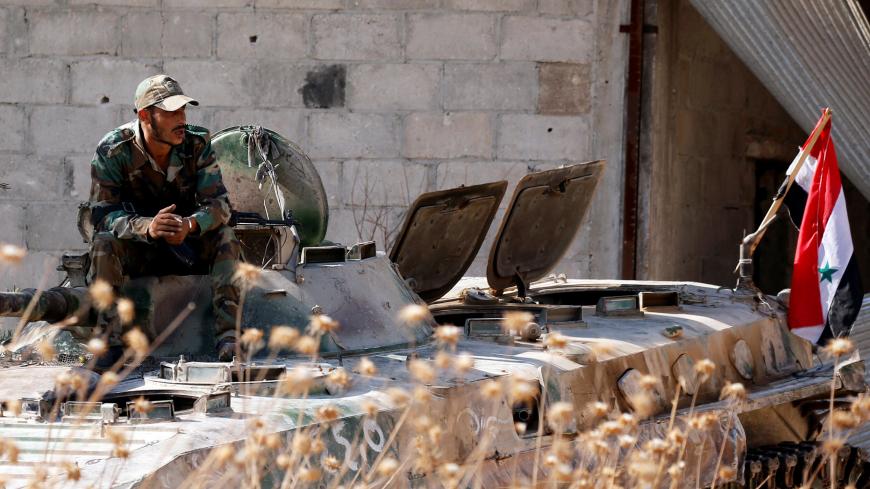 A Syrian army soldier smokes a cigarette as he sits on a military vehicle in Khan Sheikhoun, Idlib, Syria, Aug. 24, 2019. - REUTERS/Omar Sanadiki

The successful offensive by Russia-backed forces loyal to President Bashar al-Assad has driven the Syrian opposition and the jihadist Hayat Tahrir al-Sham (HTS) from Khan Sheikhoun and surrounding areas on the southern edge of the Idlib de-escalation zone. The offensive also blocked Turkey's No. 9 Morek observation post.

Moscow and Ankara each accused the other of violating the Sochi memorandum. Ankara insists it does not intend to move either this observation post, which had found itself trapped behind the Syrian army, or other posts. Turkish President Recep Tayyip Erdogan will travel to Moscow Aug. 27 to meet with his Russian counterpart Vladimir Putin to discuss the situation on the ground.

The further implementation of the 2018 Sochi memorandum in rebel-held Idlib will merely send Russian-Turkish relations into a downward spiral of confrontation and tension. As of now, Ankara has no capacity to deal with HTS in Idlib. It is not able to force the extremists to retreat at least 20 kilometers (12 miles) from the safe zone, which was stipulated by the September deal. Moscow, in turn, is unable to counter Damascus’ efforts to advance into the de-escalation zone and reestablish control over some areas. It also uses Ankara’s failure to prevent Idlib-based rebels from firing missiles at the Russian Khmeimim air base as a pretext for helping the Syrian regime in its military operations. Turkey dismisses such steps as violations of the Sochi agreement.

The situation, however, is such that even the elimination of Idlib-based HTS militants would not prompt Damascus to reconsider its plan to militarily bring the territory under its control. The Syrian regime does not discriminate between HTS and the moderate opposition, as all those who rose up against Assad are considered terrorists. The fact that eastern Ghouta saw up to 20,000 moderate fighters and mere hundreds of HTS militants did not shield the suburb from the Syrian army's disastrous attack in 2018, which was backed by Russia.

The Khan Sheikhoun operation exposed the vulnerability of Turkey’s observation posts in Idlib. Formally tasked with monitoring, the posts also aim to prevent Damascus from carrying out large-scale operations in the de-escalation zone. Yet this mission has ended in failure. Assad's forces freely operate between Turkish positions, blocking and sending the Morek post into the rear without serious consequences. Now the Syrian military may use the experience to deal with the rest of the Turkish bases in Idlib.

At the same time, Turkey may be able to stop the Syrian army from regaining control over other areas in the de-escalation zone and from besieging its observation posts by providing more military assistance to the moderate opposition. Above all, this may imply reinforcing the pro-Turkish National Front for Liberation and Jaish al-Izza with anti-tank missile systems and lightweight multiple rocket launchers, which will be propped up by uninterrupted supplies of relevant ammunition. Besides, the front may become more stable thanks to the redeployment of large Syrian National Army forces from the Euphrates Shield zone. From May through July, the fighting testified to the effectiveness of such an approach, with rebels countering the regime’s offensive and responding with heavy counterstrikes.

However, this strategy can only bring about a tactical victory and temporary success since it cannot deal with the exodus of refugees, which is the main threat Idlib poses to Turkey. By and large, the rebels were not given an incentive to retain control over the half-ruined ghost towns of Khan Sheikhoun, Latamneh and Kafr Zeita. Residents fled to Turkish border areas and Idlib, the capital of the province, after regular artillery shelling and airstrikes made the region uninhabitable.

If Russian and Syrian warplanes pound the southern and eastern parts of the de-escalation zone, they can prompt a massive outflow of people from the area and toward the Turkish border. On one hand, it is pointless for the rebels to fiercely defend the ghost towns, and on the other, the possible exodus of refugees toward Turkey puts the pressure on Ankara to act.

It would be expedient to drop the outdated provisions of the Memorandum on Stabilization of the Situation in Idlib, or the so-called Sochi deal. Ankara should admit that keeping the whole de-escalation zone as is constitutes a Herculean task. In turn, Moscow, which seeks to preserve a strategic partnership with Ankara, should appreciate Turkey’s contribution to the Syrian settlement, as well as its right to safeguard its interests in this country, regardless of the wishes of Damascus.

Turkey's withdrawal from the southern and eastern regions of the de-escalation zone seems acceptable on the condition that Turkey retain control over the border strip adjacent to the M4 and M5 highways, including the capital of Idlib governorate. Unlike the case of the demilitarized zone, Turkey should be authorized to maintain the security of the zone (using its own artillery) against regime attacks. These measures will prevent such invasions and a refugee outflow to Turkey. The area may enjoy a status similar to Afrin and the Euphrates Shield zone, which are under Turkish protection.

The Assad regime can also derive certain benefits from the deal, despite its statement on the need to liberate “every inch of Syria.” It would allow the swift reopening of the vital M4 and M5 highways connecting Aleppo and eastern Syria with Damascus and Latakia, thereby reintegrating the country’s transport system. In addition, the Syrian regime seeks to preserve the existing ethnic and religious balance at home. Many Sunni residents, who are hostile to the regime and who amount to half of Syria’s pre-war population, have either fled abroad (6.5 million) or to Idlib (up to 3.5 million). Damascus may consent to the option if the residents and displaced persons stay in a strip of the de-escalation zone (between the M4 and M5 highways and the Turkish border) in a kind of “reservation,” albeit under Turkish protection.

However, this leaves the HTS issue unsettled. Russia may permit giving the border region a status similar to the Euphrates Shield zone, even without a final settlement, as missiles fired from the territory cannot reach the Khmeimim air base. Still, the very presence of the militant group and possible provocations on its part will impede the process. Under this scenario it would be beneficial for both Moscow and Ankara to deal the most devastating blow to HTS during the Syrian army's operation. The Syrian army would try to gain control over the territory that will be transferred to Damascus after the Turkish forces withdraw. In turn, Ankara should gradually force the militants from their strongholds wherever possible, starting at the Bab al-Hawa border crossing.

In the meantime, the National Front for Liberation and the Syrian army reinforcements should amass in the areas in the strip where Faylaq al-Sham's forces and other moderate opposition groups have retained control. They will be a pillar of strength during the future operation to wrest control of the area from HTS. These ideas, some of which are being discussed in Moscow and Ankara, may or may not help Putin and Erdogan renegotiate the Sochi agreement for the sake of finding a solution in Idlib.