What's next for Russia in Idlib?

Following the violation of the cease-fire in Idlib, Russia faces the need to manage the breakout of new hostilities and fix the deal with Turkey. 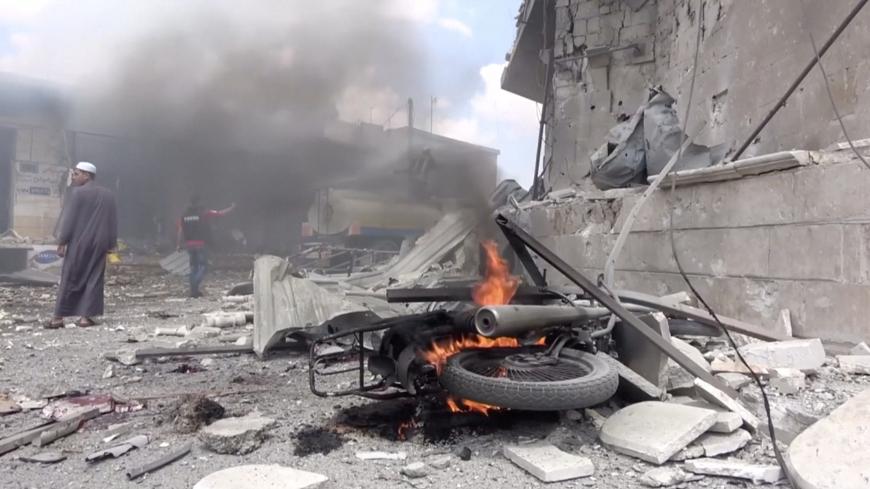 A motorbike burns after an airstrike in this screen grab taken from a social media video said to be taken in Idlib, Syria, on July 16, 2019. - White Helmets/social media via REUTERS

As Al-Monitor reported this week, the Syrian government's proposed cease-fire for the Idlib de-escalation zone was one of the main outcomes of the 13th Astana round of Syria talks in the Kazakh capital of Nur-Sultan. The Idlib de-escalation zone covers parts of Aleppo, Hama and Latakia provinces in addition to Idlib. Russia, Turkey and Iran, the guarantor states of the Astana process, endorsed the measure. Syrian opposition groups as well as the radical Hayat Tahrir al-Sham also agreed to observe the cease-fire.

The head of the Russian Center for Reconciliation of the Warring Parties, Maj. Gen. Alexey Bakin, said after the talks, "In order to stabilize the situation in the Syrian Arab Republic and to support the international summit on the Syrian resolution held within the framework of the Astana format in Nur-Sultan, Syrian President Bashar Assad made a decision to fully cease fighting and any assaults in the Idlib de-escalation zone as of 12 p.m. Aug. 2, 2019. In response to the Syrian initiative, the Turkish side is expected to implement the instructions of the Sochi agreements in their entirety, removing the militant groups and their weaponry from the demilitarized zone, stopping fire and unlocking the Damascus-Aleppo highway within 24 hours.”

The 24-hour deadline and the nature of the demands made meeting them barely possible, if that. It appears that both the Syrians and the Russians were just ensuring that they reserve the right to restart a full-fledged assault when they consider it to be necessary.

On Aug. 5, the Syrian Arab Army struck the towns of Kafr Zita, al-Lataminah, al-Zaka and Khan Shaykhun in northern Hama and southern Idlib. Damascus also said it would resume its ground operations in greater Idlib after the end of Eid al-Adha (Aug.11-15) if radical militants don’t withdraw from the 20-kilometer demilitarized zone.

Shortly after the Syrian government strikes, the Russian military reported attacks on its base in Khmeimim in Latakia, allegedly launched by Idlib-based militants.

Turkey, in order to implement the Sochi agreements, would probably have to carry out a military campaign against Hayat Tahrir al-Sham fighters using pro-Turkish groups of the Syrian opposition. The regime’s spring and summer campaign in northern areas of Hama province helped moderate rebels reclaim positions in Idlib that they lost early this year to Hayat Tahrir al-Sham.

Omer Ozkizilcik, an analyst with the Ankara-based SETA think tank, said the fight in rural Hama, joined by some factions of the Turkish-trained National Army in Afrin and the Euphrates Shield areas, has undermined Hayat Tahrir al-Sham both militarily and rhetorically.

“Tactically, to repel the regime, the group [Hayat Tahrir al-Sham] has had to allow its rivals to enter Idlib, breaking its dominance and eroding its hegemony," he said in an article for the Washington-based Middle East Institute. He added, "The first attempt to implement the Sochi agreement [between Russia and Turkey] failed, but this should not preclude a second try, especially with Turkey signaling its resolve."

Ozkizilcik also said that National Army factions, together with the Turkish-backed National Front for Liberation, could balance Hayat Tahrir al-Sham in Idlib "and force the extremists out of the demilitarized zone.”

This scenario, however, is a long-term one; bringing it to life may take several months. Moreover, involving a large part of National Army forces into the scheme seems to be difficult, considering that Ankara and Washington continue their own negotiations about the creation of a buffer zone in northwestern Syria and should this materialize the National Army is supposed to play a critical role in its maintenance. A limited contingent of National Army forces in Idlib could hardly be sufficiently effective.

Nevertheless, despite the current escalation spike, some facts give a reason to presume that both Moscow and Damascus are interested in decreasing the intensity of fighting in Idlib at the moment. Even though the latest cease-fire didn’t last long, the Syrian regime is still likely to abstain from launching other large-scale ground operations, particularly given that the last such offensive didn’t turn out as planned.

From the regime’s point of view, the results of the three-month military campaign in northern Hama were rather poor and the losses turned out to be excessive. The rebel factions from Idlib, backed by Turkey and reinforced by National Army troops, have repeatedly made successful counterattacks and even launched their own assaults. Moscow then sought to break the stalemate it had fallen into together with its Syrian ally.

Did Ankara perhaps allow Russia and its partners to finish the campaign on a rather victorious note? The Turkish side could have exerted pressure on the rebels in advance of the latest Astana meeting, forcing them to cede Tell-Malakh and Jubain to government forces that had lost control over the towns in early June following an effective counterattack by opposition groups. The Syrian army had been trying to reclaim the towns to no avail until July 28; this restoration of Syrian control allowed Damascus and Moscow to agree to reduce the escalation in Idlib without losing face.

At the same time, though the Turkish side managed to maintain the front line in Idlib and avoid a significant loss of territory by backing up the moderate opposition, the Russian and Syrian air forces continued to bomb the cities and neighborhoods of the region, posing substantial risks for Ankara. Local sources who spoke with Al-Monitor not for attribution said the civilians of Idlib are on the brink of despair, losing confidence in Turkey as a power able to provide them with a more or less acceptable quality of life. If the bombings continue, the situation is likely to cause a mass influx of refugees into Turkey that Ankara may be unable to prevent. Moreover, the refugee issue is becoming progressively more sensitive for the Turkish government’s domestic agenda.

Though the issue of refugee influx in particular is driving the Turkish side to continue supporting the opposition’s control over Idlib, this is a “weak point” that Moscow and Damascus can utilize in their next military campaign. Taking the experiences of the Hama operation into account, Russian military commanders and the Syrian regime may give up attempts to expand territorial control over certain areas of the de-escalation zone, confining their actions to a new “air attack” on Idlib.

This strategy would force large numbers of refugees to move toward the border with Turkey, exerting pressure on Ankara. At the same time, Turkey would have to cease military support to opposition militants and move its observation posts deeper into the de-escalation zone. Then the Syrian army could seize control over the areas needed to restart the traffic flow on the M4 and M5 highways between Aleppo, Damascus and Latakia. Under this scenario, a strip of land no longer than 30 kilometers in the north and northwest of the Idlib de-escalation zone, which includes the central city of the province, could end up being the only area controlled by opposition forces and protected by Turkey.

At the same time, a new air force attack on Idlib planned by Moscow and Damascus might be disrupted by the initiative the UN secretary-general proposed Aug. 1. He suggested creating a commission to investigate “the circumstances of destruction or infliction of damage upon the facilities enlisted in the de-conflicted list and functioning under the UN patronage” in the de-escalation zone. Obviously, civil facilities damaged by the air forces of Russia and Syria would be focused on.

Therefore, the situation in Idlib contains numerous threats both for Turkey and for the Syrian government together with its Russian ally; hence, it can be expected that Russian-Turkish consultations needed to work out new solutions suitable for the changing circumstances will become more frequent. Moreover, it is possible that by the time the next summit of the Astana trio’s national leaders takes place in September, another agreement on Idlib will have been made.