As the Russian Khmeimim base has come under militant shelling, the Russian military boosted the Syrian army assault on Idlib amid speculation over a back-channel Russian deal with Turkey. 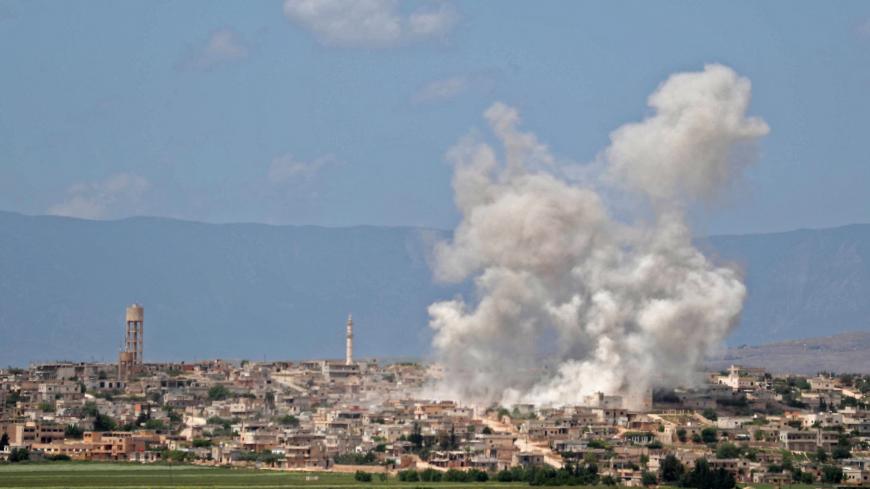 Smoke billows above building during reported shelling by government and allied forces, in the town of Hbeit in the southern countryside of the rebel-held Idlib province, May 3, 2019. - OMAR HAJ KADOUR/AFP/Getty Images

On May 6, the Idlib de-escalation zone saw a further deterioration of the situation. This zone, which spans parts of Idlib, Aleppo, Hama and Latakia provinces, is largely controlled by the Hayat Tahrir al-Sham militant group.

The Syrian armed forces and pro-Iranian militia loyal to President Bashar al-Assad launched an offensive in the al-Ghab Plain in Hama and in Latakia. The armed forces mainly targeted the town of Kafr Nabudah in Hama; heavy fighting raged there when the Syrian military met fierce resistance from the National Liberation Front, with positions changing hands several times.

In turn, the elite 42nd Brigade (Ghiath Forces) of Syria's 4th Armored Division, under command of Maher al-Assad, hit the community of Kabani in Latakia. The ground operation followed massive airstrikes by the Russian and Syrian air forces. However, the fighting has remained tactical, and the scale of a future campaign is yet to be seen.

Sources in the Russian Defense Ministry told the Russian newspaper Kommersant that the intensified hostilities occurred because Hayat Tahrir al-Sham had massed forces in what appeared to be an intent to mount an assault on Hama and because of drone attacks and shelling of the Russian Khmeimim military base launched from the de-escalation zone.

“The Khmeimim air base was attacked by multiple rocket launchers twice, in the morning and in the evening. Both times the shelling came from the east, from the part of town of Zawiya that is in the Idlib de-escalation zone controlled by Hayat Tahrir al-Sham,” Maj. Gen. Viktor Kupchishin, head of the Russian Reconciliation Center for the warring parties in Syria, said May 6.

Earlier that day, Reuters reported that Turkey-backed Syrian militants had said Moscow and Damascus were seeking to wrest control of two major highways in the northwest of the country, M4 from Aleppo to Latakia and M5 from Aleppo to Damascus. This could help pave the way for a resumption of transit from Turkey to Jordan, potentially shoring up Syria’s sanctions-hit economy.

Syrian pro-government sources also seek to portray the developments as the start of a full-scale military campaign. However, until recently Russia believed that an attack on Idlib was ill-timed, given the situation.

On April 27, following his meeting with Chinese leader , Russian President Vladimir Putin said at a press conference in Beijing that although a military operation in Idlib could not be ruled out, “It would not be advisable” at the moment, taking into consideration “grave humanitarian consequences.”

Nevertheless, the sustained Turkish military presence in the de-escalation zone has virtually been the only factor standing in the way of large-scale Syrian military operation in Idlib. While Russia steps up airstrikes in the province to signal to Ankara the need to address the radicalism issue as soon as possible, the Assad regime acts in a willful and reckless manner using open provocations. Take, for instance, the shelling of Turkey's Jabal Shashabo observation post in al-Ghab Plain; this could trigger Ankara’s own retaliation. Turkey has already sent its combat aircraft roaming the skies above Idlib.

Without a compromise between Moscow and Ankara, it is impossible to tackle the Idlib issue. No doubt modalities for a Russian-Turkish deal are being discussed, yet one should bear in mind that they can always remain “behind the scenes.” Therefore one cannot rule out that concrete terms of the deal can only be revealed through relevant developments on the ground, as was the case during the parallel operations in early 2018 conducted by pro-Turkish forces and pro-government troops in Afrin and near Abu al-Duhur in the southeast of the Idlib de-escalation zone.

For Ankara, seeing Idlib in the hands of anti-Assad groups is no longer important per se. There are, however, two factors that continue to require Turkey to maintain the status quo in the de-escalation zone. First, there are concerns over a spike in refugees that could flock to Turkey should the Syrian government attempt to bring the region under its control in an even more violent manner. Second, there is the possibility of brokering a Damascus-Ankara accord on northeastern Syria, with Idlib serving as a bargaining chip. Should Ankara drop its claims for Idlib, it could receive an opportunity to create its security zone on Syrian soil along Turkish border. However, this issue will likely remain unaddressed as long as American troops are stationed in the northeastern part of Syria. Thus, a potential Moscow-Ankara agreement may decide the fate of some parts of Idlib rather than the de-escalation zone at large.

A few scenarios are possible for such a deal. First, one cannot rule out that the current spiral of escalation will produce no territorial changes in the de-escalation zone whatsoever. This is a likely scenario if Ankara once again does its best to convince Moscow of its ability to tackle the problem of radical elements and starts taking at least some practical steps toward this goal. This does not necessarily mean that Turkish troops and the pro-Turkish Syrian National Army have to crack down on Hayat Tahrir al-Sham but this could be feasible. Turkey may try to use its influence to pursue the gradual transformation of Hayat Tahrir al-Sham into a more moderate group, with no military wing in it. In this context, the Turkish army will also have to show its readiness to respond to Damascus’ activities in Idlib should they cross some red lines Ankara set for itself.

Second, Turkey seeks to take control of Tel Rifaat, a region held by the Kurdish-led  People's Protection Units (YPG) in northern Aleppo. While Moscow holds that Ankara has fallen short of fulfilling its Idlib commitments, Ankara points the finger at Moscow over the failure to honor its pledges on Tel Rifaat.

“Russia has promised us the removal of the YPG from Tel Rifaat, but they have unfortunately not delivered upon that so far,” Turkish Defense Minister Hulusi Akar told the NTV news channel May 3.

Negotiations on Tel Rifaat are reportedly underway. The deal may stipulate that some parts of Idlib be handed to Assad’s control in exchange for the deployment of Turkey-backed Syrian National Army troops to Tel Rifaat. Amid the pressure on Idlib, Turkey signaled its willingness to militarily handle the situation in Tel Rifaat. In a display of military might, the Turkish army seized the towns of al-Malikiyah and Maraanaz on May 4.

“The agreement was for us to stop there [Tel Rifaat], but if these attacks continue, this may take a different shape. We are discussing this with Russia,” Turkish Vice President Fuat Oktay was quoted as saying.

Meanwhile, Damascus, which believes that too many concessions have already been made to Ankara, may throw a wrench into the works. As part of the agreement, the Syrian government might consent to a resolution on the Tel Rifaat issue in return for establishing control of a larger portion of the Idlib de-escalation zone, to the south and southeast of the M4 highway. In this case, Assad’s opponents and Turkish forces would retain control over a 20-kilometer-wide strip of land along the Turkish border with Idlib province. The territory could become home to refugee camps.

At the same time, one should take into consideration that such asymmetric deals could undermine the position of Turkey’s ruling coalition and Erdogan himself.