Russia, Turkey seek to break deadlock in Syria over Idlib

Russia and Turkey say they will stick to their agreements on Idlib, but recent military developments in the area expose the challenges the countries may encounter in fulfilling their respective commitments. 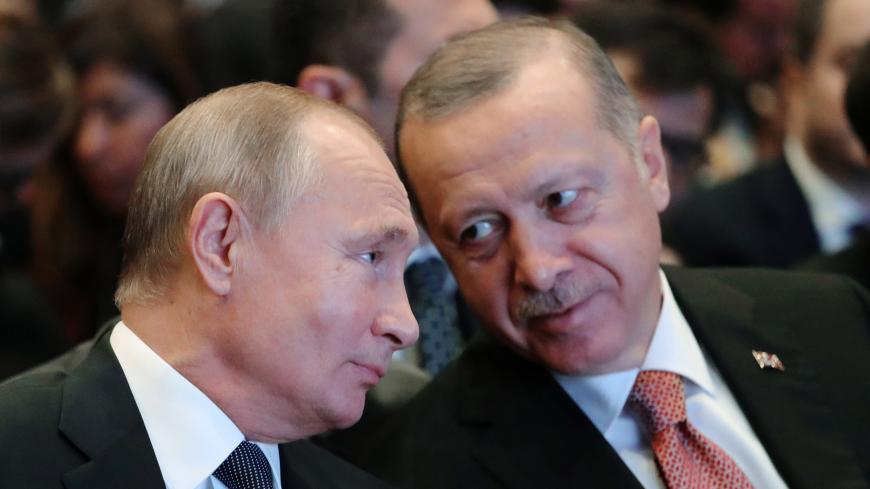 Russian President Vladimir Putin (L) and his Turkish counterpart Recep Tayyip Erdogan speak during a ceremony to mark the completion of the sea part of the TurkStream gas pipeline, Istanbul, Turkey, Nov. 19, 2018. - Mikhail Klimentyev/Kremlin via REUTERS

During the recent G-20 gathering in Buenos Aires, Russian President Vladimir Putin and Turkish President Recep Tayyip Erdogan met on the margins to discuss what's arguably the most delicate issue in their bilateral relations in Syria: Idlib. The next day, Dec. 2, Russian Foreign Minister Sergey Lavrov told Rossiya 1 TV the two leaders had agreed on additional steps to boost their ailing effort to maintain an Idlib demilitarized zone.

The two presidents had signed comprehensive Idlib agreements Sept. 17 in Sochi, Russia, but deadlines for implementing parts of the pact have come and gone. Russia backs the Syrian regime while Turkey supports opposition groups. Though the demilitarized zone separates the two, shelling continues between the regime and extremist militias that Turkey was supposed to have cleared from the area by Oct. 15.

In Buenos Aires, "They agreed on further steps aimed at honoring the agreement to create this demilitarized zone, but simultaneously to take measures so the extremists don't try to sabotage this vital agreement, which everyone has welcomed," Lavrov said. “They noted that despite the active and consistent steps of our Turkish colleagues, still not all extremists have met the demand to leave the 20-kilometer [12-mile] demilitarized zone."

Lavrov didn't specify what actions are planned, but had Erdogan raised the idea with Putin of holding yet another summit on Syria.

"I would like to mention the recently held summit on Idlib, which took place in Istanbul with the participation of four interested countries [Russia, Turkey, France and Germany]. During it, we discussed the steps that need to be taken to resolve the issue," Erdogan said. "I think it would be right to hold another summit."

Earlier, on Nov. 25, Sergei Shoigu and Hulusi Akar, the defense ministers of Russia and Turkey, respectively, had discussed the Idlib situation by phone, as they had the day before. Moreover, on Nov. 20, the ministers had met in Sochi, where Shoigu said he had been compelled to invite his Turkish counterpart “as the conditions emerging in Syria require us to make urgent decisions and to discuss certain pending issues.”

The stepped-up Russian-Turkish contacts stem from the rapid deterioration of the situation in the de-escalation zone, which had been relatively peaceful for several weeks. Recently, Turkey sent a large military convoy to northern Hama province, near Idlib. A few days later, the Syrian Arab Army's 5th Legion reportedly was being redeployed toward Idlib province from a several-week stint in southern Syria.

This could become a serious threat to the Sochi agreements and lead to a new stage of the conflict that draws in Russia and Turkey directly. However, Erdogan and Lavrov both say they want to avoid such a scenario with a political solution.

The escalation in Idlib started after a series of mutual provocations in early November between Syrian President Bashar al-Assad’s regime, the moderate opposition, and radical Islamist militias. The confrontation greatly escalated Nov. 24 and two days later, Russia carried out airstrikes on what it called terrorist positions in the de-escalation zone, having notified the Turkish army in advance. Instability and confrontations continued this week.

The situation has been aggravated by Turkey’s failure to get Hayat Tahrir al-Sham militants to withdraw from the demilitarized area by the October deadline. Moscow’s initial reaction to this situation was quite reserved. At the same time, it's impossible for the Russian side to ignore the outbreaks of violence around the de-escalation zone. Moreover, it looks suspicious to Moscow that Turkey and the moderate opposition are neglecting their duty to remove the extremists.

Nevertheless, Turkey’s position is equally understandable. The National Liberation Front, a coalition of militias formed in May with Turkey's help, finds it absolutely unacceptable to launch a military operation against Hayat Tahrir al-Sham under current conditions, when the threat of being assaulted by Assad’s government is quite real.

For instance, numerous sources supporting Damascus clearly state that the cease-fire in Idlib initially was planned as a mere strategic pause. Moscow’s efforts in this sense are aimed at clearing the way for Damascus to reclaim Idlib through diplomacy. At the same time, Moscow supplies Damascus with new weapons for a military move on Idlib, and provides it with S-300 missile systems that could significantly hinder attempts by the United States and its allies to “punish” Damascus for possible escalations.

All these facts align with Syrian Foreign Minister Walid Muallem's requests to make the opposition hand over its entire heavy and medium-grade weaponry by December — basically disarming and surrendering, as happened in the summer in southern Syria. The politicians in Damascus realize time is critical. As the US sanctions against Iran have been launched, it's uncertain whether Iran will be able to provide Assad’s regime with the necessary military aid in the future. Moreover, lawmakers are concerned that Moscow could reach an agreement with Washington and Ankara, and as a result refuse to solve the Idlib problem by force altogether. Thus, Damascus is striving to start an assault as soon as possible.

As for the Turkish forces deployed around the de-escalation zone, they are undoubtedly a major obstacle to Damascus’ military plans. But Turkey can't guarantee it will be able to protect the opposition from the government’s attack, as Damascus does indeed admit that the campaign is possible even if the Turkish forces remain in Idlib. Meanwhile, it's unclear what actions Ankara thinks its soldiers should take as the cease-fire deteriorates.

As for the opposition forces, they realize that a full-fledged military campaign against Hayat Tahrir al-Sham would quite likely lead to a provocation that would allow Assad to assault Idlib without restrictions, as every effort would be directed to fight the radicals. The successful campaign carried out in February and March by an alliance of opposition groups led by Jabhat Tahrir Suriya (Syrian Liberation Front) against Hayat Tahrir al-Sham was possible only because the regime’s main forces had been fighting on the outskirts of Damascus as part of the siege of eastern Ghouta. At that time, the possibility of the regime attacking Idlib was rather slim. All these factors allowed the opposition to concentrate its bulk for the fight against Hayat Tahrir al-Sham and avoid being attacked by pro-government forces. Currently, such conditions don't exist.

Thus, Russian and Turkish military structures have to design a new roadmap to implement the Sochi agreements on a shifted deadline. It's unlikely Moscow is indeed interested in a regime assault on Idlib, as that could disrupt the rapidly developing relations between Russia and Turkey, and even lead to a profound conflict. However, Russia won't be able to remain indifferent if Hayat Tahrir al-Sham jihadis on one side and Assad’s regime on the other engage in full-fledged fighting. That situation would require a clear reaction from Turkey as well.

Ankara can influence Hayat Tahrir al-Sham and stop it from launching any large-scale campaigns against Syrian government forces — however, it's hardly able to protect Assad’s regime from individual provocations and persuade the moderate opposition to attack Hayat Tahrir al-Sham under the current conditions. Equally, Russia can't guarantee Turkey protection from any regime provocations. Considering that, certain mutual guarantees may become a significant factor in maintaining the Sochi agreements, such as Russia pledging to prevent an attack even if specific cases of provocation take place, and Turkey promising to implement the agreed-to actions to eventually eliminate the radicals' presence in Idlib. Moreover, the deadlines for every action should be extended to become more realistic, by as much as several months.

Turkish leaders and the Syrian opposition have also proved their ability to confront the crimes and anarchy spreading among independent warlords, carrying out a campaign to eliminate all groups and gangs that refused to submit to the leaders of the pro-Turkish Free Syrian Army (also known as the Syrian National Army).

One should also take into account that Hayat Tahrir al-Sham is currently caught in a harsh situation. The group is basically fully isolated, suffering from a severe lack of financing. It has turned to unpopular measures, such as excessive "taxes," confiscating the property of Christians who had fled the area and even taking civilians hostage for ransom. These actions stir up social protest and new waves of repression, which lead only to growing alienation between the radicals and the population. Under these conditions, the passage of time is working against Hayat Tahrir al-Sham: Even if a military campaign in Idlib is prevented, Turkey will likely manage to neutralize the jihadi group, which is also being torn by internal controversies.