Can Turkey escape the fireball in Idlib?

Protesters in Idlib are calling Turkey traitorous, but that’s only a small part of the big picture, in which radical jihadi groups emerge as a fireball in all scenarios for Ankara, entertaining menacing ambitions. 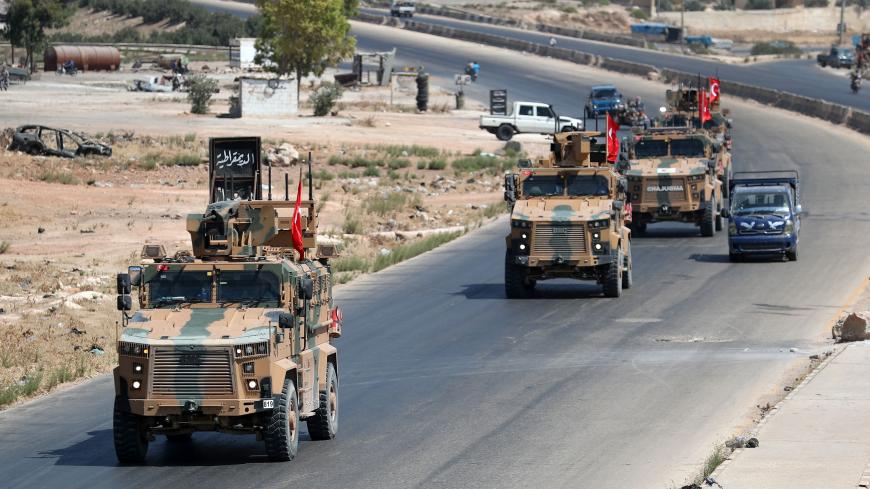 A series of momentous developments in Syria’s rebel-held province of Idlib in recent weeks have raised the specter of the grave scenario that awaits Turkey in the Syrian crisis. It all started with Turkey’s failure to shield rebel forces in Idlib, as they had expected. The regime offensive that led to the fall of Khan Sheikhoun last month left the Turkish military observation post at Morek besieged. President Recep Tayyip Erdogan rushed to Moscow, only to return empty-handed, as hundreds of Syrians stormed Turkey’s borders, furious over its inaction.

The risk of a new refugee wave aside, the situation now threatens to render Turkey both a hostage to the crisis and a target of armed groups.

Demonstrations after Friday prayers have become a fixture in Syria since the uprising erupted in 2011. On Aug. 30, those demonstrations turned against Turkey, the steadiest supporter of both the civilian and armed opposition. Clearly, Erdogan’s Aug. 27 trip to Moscow, which saw him lick ice-cream with his counterpart Vladimir Putin and admire Russian jets at an aerospace fair, led the Syrian opposition to believe Idlib was “sold out.” What Erdogan got in Moscow was just Russian military police protection for the besieged Turkish outpost and a promise for some temporary and selective cease-fire. Angry Syrians responded by marching to the frontier under the slogan “Millions tearing down the Turkish border.”

In extraordinary scenes at two border crossings between Turkey and Idlib, demonstrators shouted slogans calling Turkey and its military “traitors” and “collaborators” of Russia. “We are going to Reyhanli to teach them what it is to sell us out,” some protesters chanted, referring to a Turkish town across the border, as others burned an Erdogan poster. Many were injured as the Turkish security forces used tear gas and water cannons to stop the charging crowds, and fired warning shots in the air. Similar protests were held in Idlib and the towns of Jisr al-Shughur and Sarmada.

One could hardly see the protests as a mere civilian reaction, given they took place in areas controlled by Hayat Tahrir al-Sham (HTS) and its allies. As the furious slogans and rhetoric suggest, the protests are meant to put multi-dimensional pressure on Turkey, namely to force it to relax its border policy, which is no longer open to refugees, and use its military observation posts in Idlib to stop the regime offensives. Another apparent expectation is that Europe, alarmed over a fresh refugee wave, would press Russia to go easy on Idlib. In telling remarks to Turkey’s Anatolia news agency, a protester said, “I want the Russian and regime attacks to be stopped as soon as possible. Or [Turkey] should open its doors to us. We want to migrate to Europe.”

Some might suggest that such pressures on the border will play into Turkey’s hands, given Erdogan’s record of using the refugees to blackmail Europe. Foreign Minister Mevlut Cavusoglu, visiting Norway on the day of the protests, was quick to warn that “the attacks in Idlib could unleash a fresh migration wave to Europe.”

Erdogan followed suit a few days later, brandishing the refugee card to press his vision for the planned buffer zone in Kurdish-held areas in the north. “We are planning to resettle at least 1 million of [the Syrian refugees in Turkey] in the safe zone that we’ll create along the border,” he said, suggesting the construction of new homes in an area with a depth of 30 kilometers (some 19 miles). “Give us logistic support to build those homes … or else, we’ll be forced to open the gates,” he said, implying he would let the refugees go to Europe.

Yet two points should not be ignored. First, the pressure on the border, which might currently appear as a trump card for Erdogan, could trigger developments jeopardizing Turkey’s military presence in Syria, which stretches from Azaz, Jarablus and al-Bab to Afrin and Idlib. Second, the relatively friendly stance of the groups in Idlib could morph into enmity against Turkey.

The likelihood of Turkey falling into a boomerang trap is growing as its military presence in Idlib can no longer serve as a shield for the rebels amid the tightening noose of the Russian-backed Syrian army.

The only reason why the rebels have not already turned their guns on Turkey is that the Turkish border continues to be their lifeline. In fact, rebel resentment with Ankara has been tangible since Turkey joined the Astana process with Russia and Iran in 2016, then rallied some factions around its own agenda in the Euphrates Shield and Olive Branch operations and sought to “moderate” them under the umbrella of the Syrian National Army.

In an interview with Reuters in May, Fawaz Hilal, the head of the HTS civilian arm, openly expressed disappointment with Turkey. He said Turkey was allowed to set up military outposts in the hope their presence would provide protection for the people. “But the reality says that these positions are not able to protect themselves today,” he grumbled. He called on Turkey to “defend these positions they set up and the areas they entered and prevent Russian and Syrian jets from flying in the areas where they are present, and the shelling of surrounding areas,” adding that Ankara should clarify “their role and what they want from these positions.”

Beyond such expectations, however, there seems to be an intent to draw Turkey directly into the fighting, as evidenced by the striking remarks of a German member of Hurras al-Din, an al-Qaeda affiliate, to researcher Aymenn Jawad al-Tamimi. According to the text of the July interview, made available to Al-Monitor, the militant expressed hope that Turkey would get involved “in this war directly to divide the power of the infidels,” adding that this would “take the jihad to Turkey.” If this does not happen, he continued, “Turkey would open the borders like in the time of [the Islamic State]. Open borders mean migrants and weapons.” The militant described Turkey as an “apostate” power, but asserted that jihadi interests are now in favor of Turkey and that it is permissible to exploit apostates in the fight against infidels. “Right at the moment … we can't live without Turkey,” he said. “All kinds of things are coming through Turkey. If Turkey closes the border then we are really under siege.”

So, the border crossings are the key element that will shape Turkey’s relationship with the groups holding Idlib.

Despite its predicaments in Syria, Ankara is unwilling to call it a day, not only because of its calculations regarding Syria’s future and the Kurds, but also to avoid antagonizing the groups in Idlib. Yet, having failed to fulfill its commitments in Idlib under the Sochi deal, it is not in a position to stop Russia’s operational strategy.

Following the fall of Khan Sheikhoun, the first phase of this strategy aims to take control of Maarat al-Numan and Saraqib to reopen the M5 highway connecting Aleppo and Damascus. The second phase aims at capturing Ariha and Jisr al-Shughur to reopen the M4 highway linking Aleppo and Latakia. The accomplishment of those objectives would mean more than half of Idlib’s territory coming under government control.

The ultimate aim is to extend government control all the way to the Turkish border, but Russia might opt for a middle-way formula for the sake of its ties with Turkey. In January, Putin raised the prospect of a safe zone along the Turkish border, bringing up the 1998 Adana accord between Turkey and Syria on fighting terrorism. This, of course, would require that Ankara cooperate with Damascus. The formula would probably rest on the following logic: Preventing the influx of refugees and fighters to Turkey will keep Ankara within the confines of Russia’s strategy, reduce the risks in the political settlement process, help the creation of a constitutional committee and provide leeway to see after the eastern bank of the Euphrates, where the United States holds sway.

A safe zone along the Turkish border could keep the Syrian army away, but would it remove the threat of jihadi groups? Or could Turkey ensure nonconfrontation in the area? The operations to reopen the M4 and M5 highways will inevitably leave Turkey’s observation posts in the circle of fire, just as it happened in Morek. And the Russian insurance policy might fail to function properly in each encounter between the Turkish and Syrian militaries. Moreover, even if the first phase is completed without derailing the Turkish-Russian partnership, the problem for Ankara would be far from over. Should northern Idlib come under Turkish patronage after being cut off from the main routes and devalued strategically, this would still require the elimination of HTS and its allies, which dominate the area.

Turkey’s commitments under the Sochi deal required the separation of moderate factions from radical ones and the elimination of terrorist groups. Yet the creation of umbrella groups such as the Syrian National Army and the National Front for Liberation not only failed to break the dominance of HTS and al-Qaeda, but HTS was able to expand its territorial control in Idlib to 90% from no more than 60% previously. To make things worse, groups armed by Turkey sided with HTS in the latest clashes. Rival factions that fought each other last year are now collaborating in a joint operation room called Fatah al-Mubin.

Keeping hands off those groups and acquiescing to their presence along the border could prevent things from spiraling out of control only in the short run. Moreover, al-Qaeda-inspired groups that would be forced out of the M-4 and M-5 routes would inevitably retreat to the same buffer zone. Those are groups that reject any political settlement, bent on waging jihad to death. In sum, a middle-way formula would only extend the turmoil to the long run, with Turkey still holding the fireball in its lap. 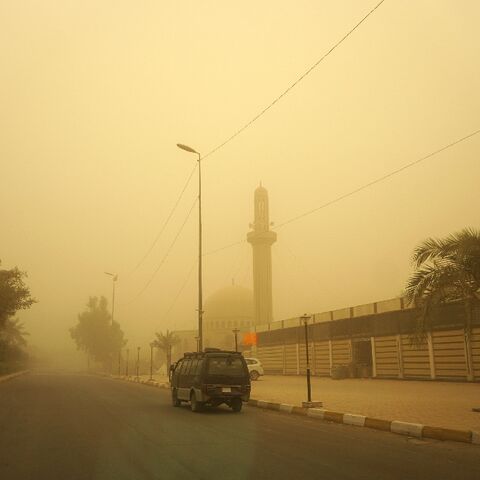 Iran warns it will 'avenge' killing of Guards colonel 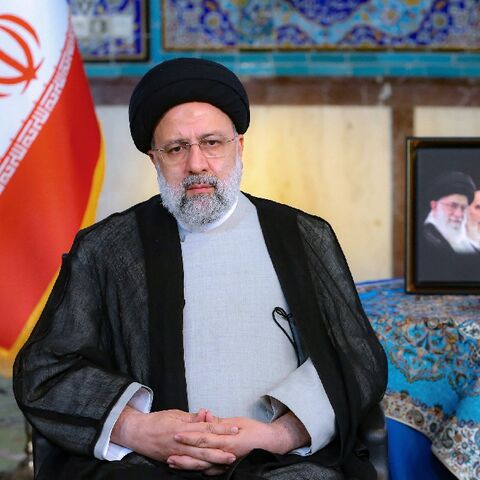