Turkey has found itself with little room to maneuver in Idlib after its last-minute moves failed to avert the fall of Khan Sheikhoun in a Syrian army offensive that seemed to be a response to the new Turkish-US partnership to the east of the Euphrates River. 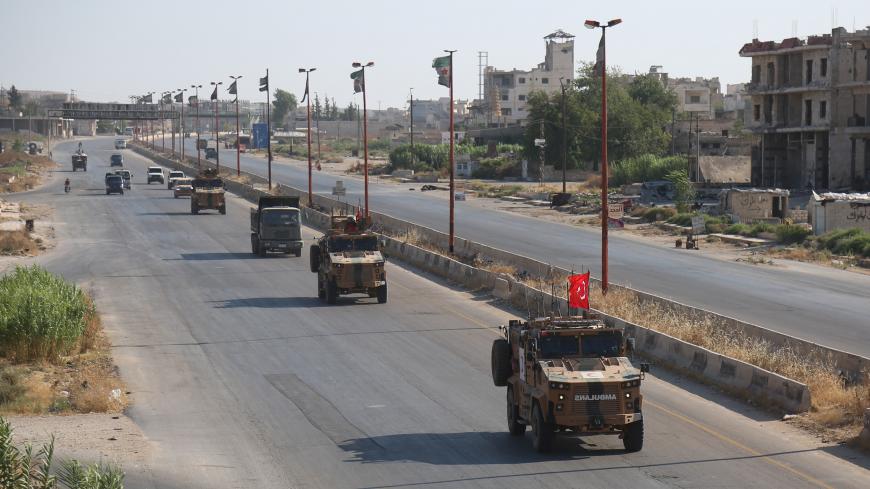 In the chess game in Idlib, which has seen both collaboration and rivalry between Turkey and Russia, Ankara was placed in check for the first time this week. The Syrian army and its allies captured Khan Sheikhoun, a key town in the rebel-held province, soon after they resumed their offensive on Idlib as Turkey reached a deal with the United States to jointly create a safe zone in Kurdish-held areas east of the Euphrates River.

The fall of Khan Sheikhoun marks a major debacle for the rebel forces and puts Turkey inside the circle of fire. The Turkish military’s base at Morek — one of the 12 Turkish observation posts set up around Idlib as part of a de-escalation plan — is now under a siege by the Syrian army. Foreign Minister Mevlut Cavusoglu said Turkey has no intention of retreating, with Russian and Turkish military officials starting talks Aug. 21 to decide the fate of the Morek outpost.

There is ample reason to suggest that the thrust on Khan Sheikhoun was a response to Turkey’s plan to set up a joint operation room with the United States under the safe zone accord, a move that will change the equilibrium in Syria. The accord, announced Aug. 7 at the end of Turkish-US talks in Ankara, alarmed Russia over Turkey’s intentions. Moscow was already wary that Turkish President Recep Tayyip Erdogan could play a double game as it sought to maintain strategic cooperation with Ankara, both through the Astana process and the sale of the S-400 air defense systems.

Clearly, a safe zone to curb the Kurds to the east of the Euphrates will preclude the Syrian state’s return to those areas. Also, in the event of a revived Turkish-American partnership in Syria, Turkey’s military presence in areas it seized in the Euphrates Shield and Olive Branch operations coupled with its observation posts in Idlib could go out of the bounds of Russia’s game plan. This possibility, too, is prompting Moscow to play hardball.

The trilateral partnership between Turkey, Russia and Iran in the Astana process proved instrumental in breaking rebel fronts, like in eastern Aleppo in 2016, but it also made Turkey a stakeholder on the ground. For Russia, the Sochi deal with Turkey in September 2018 was meant to lead to a resolution in Idlib, replaying the scenario that had worked in eastern Ghouta, Daraa and Quneitra. Turkey’s role was supposed to be mine clearance on the way. But despite Erdogan’s pledges to his Russian counterpart Vladimir Putin, a de-escalation zone could not be established and Turkey’s military presence became a stumbling block impeding the Syrian army’s operations. In a sense, the Astana process turned into a tangle itself. To untangle things, the Russians had to either brave ending the Astana process or change the situation on the ground. The onslaught on Khan Sheikhoun shows they chose the second option. In other words, they are trying to force Turkey to step back and acquiesce to the new state of affairs without abandoning the Astana process.

Cavusoglu warned the regime Aug. 20 to “not play with fire” and vowed that Turkey would do “whatever it takes” to ensure the security of its soldiers, referring to a Turkish convoy the Syrian army hit on the day it entered Khan Sheikhoun. Despite the high-pitched rhetoric, however, Turkey is in a tight spot, having failed to fulfill the “impossible missions” it took upon itself in Sochi. It is left with little room to maneuver, other than playing up the issue of civilian casualties and inevitably resorting to the Russian channel again.

Above all, Russia is able to easily argue that the offensive does not breach the Sochi deal on Idlib. Foreign Minister Sergey Lavrov stressed Aug. 20 that rebel attacks “never stopped this year” despite Turkey’s observation posts. “In all these instances, our Turkish colleagues were warned that we would strike back … because the Idlib agreement does not provide for applying the cease-fire to terrorists,” he said.

Putin argued that “about 50% of that territory was under terrorist control” before the Sochi agreement “and now that number is 90%” as he rebuffed Western criticism over the offensive during an Aug. 19 visit to Paris. In another accusation cornering Turkey, he said that beyond the attacks, “we are seeing the movement of militants from that region to other parts of the world and this is extremely dangerous.”

Putin’s charges mesh with Libyan allegations that Turkey has been transferring jihadists from Idlib to Libya to fight against Khalifa Hifter’s forces. The alleged transfer could well grow into a headache for Turkey at the UN Security Council in the future.

In the initial phase of the Idlib offensive, which began in early May, the Syrian army was able to swiftly capture an array of villages and towns but failed to retain control and retreated, primarily because of Turkey’s role. Turkey not only sent allied fighters from other areas to the south of Idlib, where the clashes were raging, but also provided support in the form of military vehicles and ammunition for the militants.

As Khan Sheikhoun was about to fall, Turkey attempted another reinforcement, sending three military convoys to the area, but it was too late. The Syrian army had cut off the M-5 highway and launched an airstrike to stop the first convoy. The strike killed a commander and two other members of the Faylaq al-Sham group, which was escorting the convoy. By taking such a risky move, the Syrian army made it clear that balance-tipping Turkish assistance would no longer be allowed. It is safe to assume the strike had Russia’s approval. Some sources even claim that Russian Su-35 planes intercepted Turkish F-16 jets sent to area after the convoy was hit.

Ankara claimed the convoy was taking reinforcements to the Turkish observation post at Morek, but a Syrian Foreign Ministry official charged it was taking weapons and ammunition to Khan Sheikhoun to help the militants. Syrian President Bashar al-Assad said the battles in Idlib “proved Ankara’s clear and unlimited support for terrorists” and Syria’s UN envoy brought up the accusations at the Security Council.

Russia is likely to keep presenting upcoming moves as efforts to implement the Sochi agreement. This means the reopening of the Aleppo-Damascus (M-5) and Aleppo-Latakia (M-4) highways to traffic and the establishment of a buffer zone around Idlib free of heavy weaponry and militants that would be 15-20 kilometers (9-12 miles) wide and cover certain areas of the neighboring provinces of Aleppo, Hama and Latakia. So far the general strategy to fully cleanse Idlib is in line with the framework of the Sochi deal. The ensuing phases are likely to create new situations to deal with.

Ahead of the 14th round of the Astana talks, scheduled to take place Sept. 16 in Turkey, Russia has already shown the new rules of the game. The Syrian army, meanwhile, will probably not stop at Khan Sheikhoun. It is likely to turn to the two other militant-held towns blocking M-5, Maarat al-Numan and Saraqib, and could also set its sights on Jisr al-Shughur, which lies on the M-4 route.