The Turkish-Russian deal for a demilitarized zone in Idlib is not going on as planned, with radical groups keeping their positions and lingering uncertainty on the scale of the pullout of heavy weaponry. 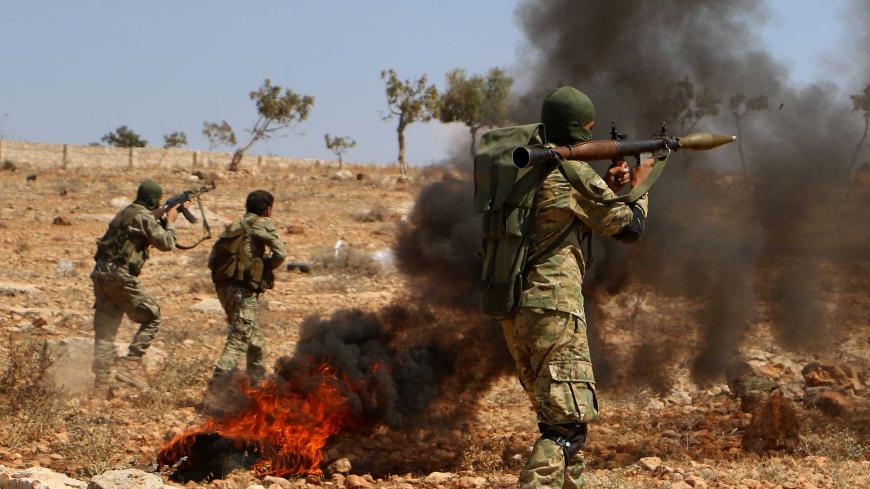 The deadline is up for the first two stages of a Russian-Turkish deal to create a demilitarized “buffer belt” around Syria’s rebel-held province of Idlib. The Sept. 17 deal, agreed between the two countries’ presidents in Sochi, required militants to surrender their heavy weapons by Oct. 10 and the removal of groups deemed as “terrorist” from the zone by Oct. 15. With a fine adjustment to keep up appearances, heavy weapons were only withdrawn from the front lines, while the condition for the pullout of groups deemed as terrorist, including Hayat Tahrir al-Sham (HTS), Hurras al-Din, the Turkistan Islamic Party and Ansar al-Islam, could not be met.

Turkey’s state-run Anatolia news agency reported the withdrawal of mortars, cannons, tanks and Grad and medium-range missile launchers, while the Defense Ministry announced Oct. 10 that “Turkey has fulfilled its responsibilities as a guarantor country” and that “the withdrawal of heavy weapons was completed” that day.

It is impossible to determine or confirm how many weapons have been surrendered and how many have been stashed away. Skeptics of the deal have little to say, given the Russian nod of approval. Foreign Minister Sergey Lavrov said things were “progressing well,” signaling Moscow’s willingness to continue working with Turkey and not cast a shadow on the Sochi accord. The task of highlighting potential gaps was up to Foreign Ministry spokeswoman Maria Zakharova, who said Oct. 10 that Russian experts were trying to verify the pullout of heavy weapons. Over 1,000 militants had left the demilitarized zone, and about 100 pieces of equipment had been withdrawn, she added. The figures appeared quite modest, given the large number of militants in the region. Damascus, meanwhile, said it was awaiting Russia’s confirmation on the implementation of the deal.

Official statements aside, reports from the field paint a picture that is heavily open to interpretation.

Commanders of the National Liberation Front (NLF) — an umbrella group of rebel factions, formed with Turkish support — say they have enough arms to repel potential attacks despite the withdrawal of heavy weaponry. According to opposition sources, groups that do not want to “fall into the trap of the regime” and that oppose Russian entry into the zone are reinforcing their areas of control, deploying more light weapons and fighters, including snipers, and fortifying defense positions.

The rebel strategy was perhaps best summarized by a commander of Jaish al-Izza, who said most of the heavy weapons were kept in warehouses away from the front lines, to be brought out when heavy fighting erupted, so they merely stayed there.

Jaish al-Izza, which controls the region of al-Lataminah in southern Idlib, has been intransigent all along. Its leader Jamil al-Saleh rejected the Sochi deal, saying that it “eats into liberated [rebel-held] areas and bails out Bashar al-Assad.” The group categorically rejected Russian patrols in the buffer zone, while urging Turkey to prevent a repeat of the regime’s seizure of the three other de-escalation zones in Syria.

NLF commanders, meanwhile, confirmed compliance with the deal after making conflicting statements. Since the pullout of heavy weaponry was accepted as sufficient, things became easier for NLF factions, many of which joined the alliance to duck the terrorist label. The NLF, which has refused to withdraw its fighters from the buffer zone, is also opposed to Russian military police patrolling the zone along with Turkish troops. In Oct. 2 remarks to Reuters, NLF commander Sheikh Omar Hutheifa said they had told Turkish officials that Russian patrols were “a red line” and received assurances that “there would be no entry of Russian troops.”

The al-Qaeda-linked HTS was the group that struggled the most to come up with a clear position. While it did not openly endorse the Sochi deal, it was ambivalent and played a double game to avoid confronting Turkey and the risk of provoking a Russian-Syrian offensive. In late September, an NLF leader said HTS had sent “secret signals” to the Turkish army through third parties that it would abide by the agreement.

Following heated internal debates, HTS finally issued an official statement Oct. 14, saying, “We appreciate the efforts of all those who strive inside and abroad to protect the liberated area.” It stressed, however, “We have not abandoned our choice of jihad and fighting toward implementing our blessed revolution,” signaling an intent to fight until the regime is toppled. The group made it clear it would not surrender its weapons and it would embrace foreign fighters, who are not considered part of the solution process in the Astana process or Geneva talks.

Earlier, HTS heavyweights had harshly criticized the Sochi deal. Abu al-Fath al-Farghali, a member of the HTS Sharia committee, said, “Pragmatism is the graveyard of jihad. … Surrendering weapons would be the greatest betrayal of religion and the martyrs’ blood. Evacuating positions would be an even greater betrayal.” Prominent HTS member Abu al-Yaqdhan al-Masri, meanwhile, said that “the claim that heavy weapons will be brought back if need be is nonsense and military charlatanry,” referring to alleged Turkish assurances to the rebels.

HTS, which controls two-thirds of Idlib province with some 15,000 fighters, is estimated to have about 5,000 men in the buffer zone. No confirmed information exists to suggest that HTS has withdrawn more than a fifth of those fighters from the zone.

In practical terms, a pullout by HTS would mean the surrender of its control of the M-5 and M-4 highways and a significant loss of revenue. By controlling the two highways, HTS enjoys geographical and strategic superiority, while collecting “taxes” at checkpoints.

After Turkish-Russian technical talks on the implementation of the Sochi deal, the planned buffer zone turned out to be larger than initially expected. Accordingly, the demilitarized strip — 15-20 kilometers wide and 250 kilometers long — extends to Jisr al-Shughur, Maarat al-Numan, Saraqib and the southern and western areas of Aleppo, including the routes of the M-5 and M-4 highways. The deal calls for the two highways to be reopened by the end of the year. M-5, which runs from Aleppo to Damascus, passes through Saraqib, Maarat al-Numan and Khan Sheikhoun, while M-4, which connects Aleppo and Latakia, passes through Ariha and Jisr al-Shughur.

Hurras al-Din, formed by 11 factions loyal to al-Qaeda creeds, appeared to partially withdraw heavy weapons, although it openly rejected the deal. Yet, despite the show of flexibility by jihadi groups, they have neither pulled out nor given up on the war.

Hurras al-Din, Ansar al-Tawhid, Ansar al-Din and Ansar al-Islam have formed a joint operation room in Idlib, proclaiming that their objective is “not defense but assaulting regime forces.” Their first attack took place Oct. 13 in the Hama countryside, targeting the Jurin military base with heavy weapons. Without mentioning locations, the Russian Reconciliation Center at the Khmeimim air base said afterward that armed groups in the de-escalation zone had continued to attack government forces.

Foreign fighters, meanwhile, have not given a hoot about the Sochi deal at all. The Turkistan Islamic Party has no intention of pulling out and is reportedly digging fresh trenches around Kabbani inside the buffer zone.

How long the calm in Idlib will last is hard to predict. According to Syrian army sources speaking to al-Masdar, talks are continuing with the Russians on the next steps in Idlib, Aleppo, Latakia and Hama. They make no mention of an imminent operation, but for Damascus, the deal in Idlib is temporary in any case.

The new situation places heavy responsibilities on Turkey. The groups that pledge compliance with the deal see Turkey as a protective shield against the regime. As such, Turkey is joining the parties that are actively and officially fighting the war.

Second, to prevent the collapse of the deal, Turkey is expected to stem attacks on regime positions by the groups that have no intention of standing by silently. Efforts to restrain them could draw Turkey into fighting.

Third, it is obvious that the current status quo will not last forever. Turkey says it will remain a guarantor of the zone until a political solution is found. Yet the political solution it has in mind may never materialize. How much and how long can Turkey ensure the stability of an extremely troubled and fluid region with scores of armed groups and thousands of fighters? No one has the answer.