The Hayat Tahrir al-Sham jihadi coalition has overpowered Turkish-backed rebel groups in Syria’s flashpoint province of Idlib, upending the essence of the de-escalation deal developed by Turkey and Russia. 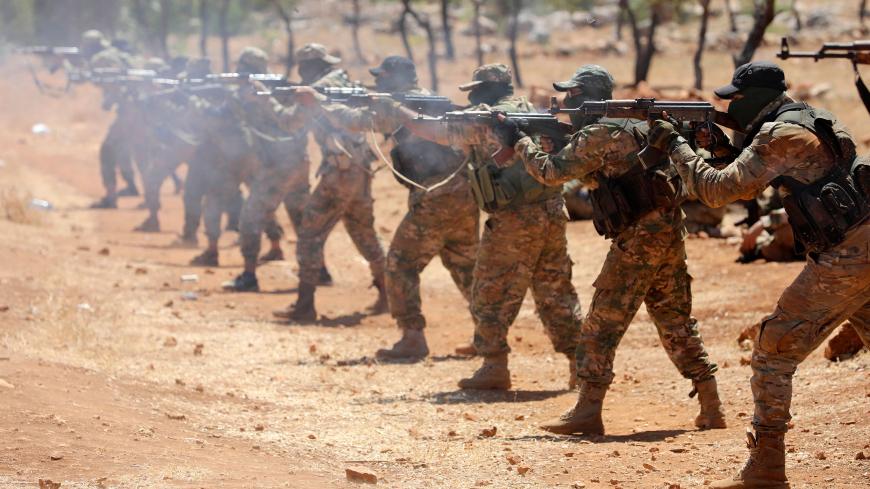 Syrian fighters fire AK-47 rifles as they attend a mock battle in anticipation of an attack by the regime on Idlib province and the surrounding countryside, during a graduation of new Hayat Tahrir al-Sham members at a camp in the countryside of the northern Idlib province, Syria, Aug. 14, 2018. - OMAR HAJ KADOUR/AFP/Getty Images

As Turkey faces obstacles in the Syrian military operation it plans for Manbij and northeast Syria, drama is developing in Idlib province, where 12 Turkish posts overlook what is supposed to be a de-escalation zone.

Since the beginning of January, Hayat Tahrir al-Sham — a coalition of Islamist factions in northern Syria — has routed the opposition groups Turkey had merged under the banner of the National Liberation Front.

Here is a brief overview of how the current situation developed.

On Jan. 6, Thuwar al-Sham and Biyareq al-Islam raised a white flag in Al-Atarib. Some 1,000 fighters from those two factions left the city under a deal.

On Jan. 9, Ahrar al-Sham handed over al-Ghab Plain and Shashabo Hill in Hama governorate to Hayat Tahrir al-Sham, which required Ahrar al-Sham to disband in those two regions.

On the 10th day of the clashes, Hayat Tahrir al-Sham and the National Liberation Front signed a cease-fire deal that requires them to remove road barricades and checkpoints and mutually release captives. The so-called Salvation Government, the civilian arm of Hayat Tahrir al-Sham, will take over administration of all areas Hayat Tahrir al-Sham captured in those 10 days, along with Ariha and Maarat al-Numan. However, similar agreements signed in the past quickly collapsed. Should this deal collapse as well, Hayat Tahrir al-Sham could advance even farther if Turkey doesn't intervene — which it hasn't, so far.

Turkey is, however, reinforcing its border, sending commandos and armored vehicles to its Hatay province on the border with Idlib, Turkey's state-run Anadolu Agency news group reported Jan. 11.

Turkey hoped it could move the Sochi deal forward as a result of proxy operations without involving its own troops, through subtle interventions by its intelligence service and by negotiation. But the buffer zone, which was supposed to be cleared of terrorist groups and heavy weaponry, has fallen largely into Hayat Tahrir al-Sham's hands. Another Sochi commitment required the reopening of the M-5 and M-4 roads by the end of 2018. To keep its word, Turkey should now intervene, or acquiesce to the big offensive that Russia and Syria had put off.

Ankara watched in silence as Hayat Tahrir al-Sham advanced in recent days, giving rise to certain suspicions. Observers ask why Turkey didn't help the National Liberation Front, a question that brings along a second one: Could it be that Turkey has made some deal with Russia?

One potential scenario is that Turkey might have forfeited Idlib in return for Manbij. According to another scenario, Turkey could let Russia go ahead rather than keep its end of the bargain in the Sochi deal and draw the wrath of jihadis upon itself. Although such a deal with Russia can't be ruled out, eschewing intervention is not really out of sync with Turkey’s general strategy in Syria in years past.

In 2014, Turkey refrained from directly intervening even in the clashes between its ally, the Free Syrian Army, and the Islamic State, which had reached Turkey’s borders. Instead, it chose to beef up support for its allies to tip the scales. It stuck to the same tactic later, when the factions of the Army of Conquest began to fight each other after taking hold of Idlib.

A Hayat Tahrir al-Sham sheikh, for instance, has criticized groups willing to join Turkey’s planned operation east of the Euphrates against the Kurdish People’s Protection Units (YPG), arguing that involvement in “a war between a secular army and an atheist party” is incompatible with Islam.

A spokesman for the National Army, another Turkish-backed rebel force, has accused the jihadis of attempting to distract Turkey-allied forces to keep them from participating in Turkey's plans to attack the YPG and seize Manbij and towns on the eastern bank of the Euphrates. (That operation became complicated, however, when Syria sent military forces to fortify Manbij at the Kurds' request.) It is a fact, however, that the latest jihadi clashes were fanned by attacks by Ahrar al-Sham and Nour al-din al-Zenki on Hayat Tahrir al-Sham. As early as Dec. 3, Hayat Tahrir al-Sham reported deadly fighting with Ahrar al-Sham after the latter attempted to seize Hayat Tahrir al-Sham territories while the Syrian army fortified positions to the south.

Finally, regardless of whether a secret plan is at play in the background, the latest developments have led to a situation in which Turkey can no longer shield the “jihadi reserve” of Idlib.