Turkey calls on Russia, Iran to get Syrian army under control

The Syrian army's attacks against armed groups at Idlib could ignite tensions between Russia and Turkey. 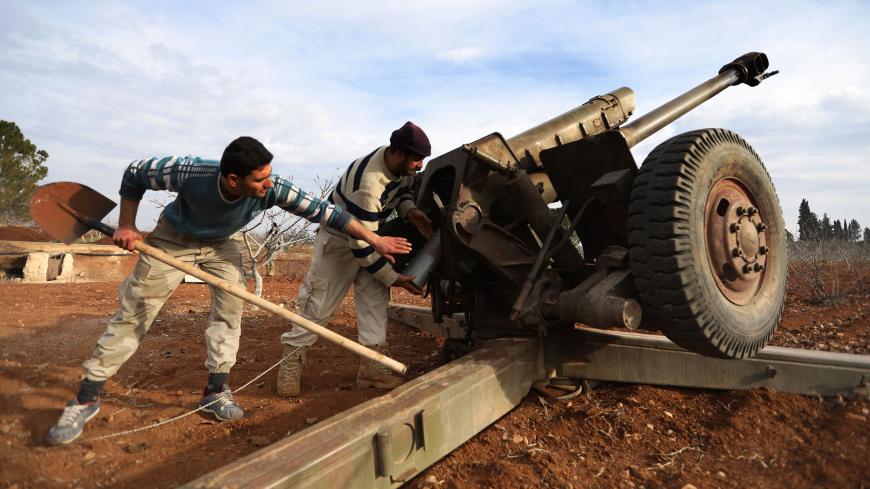 Even as Russia plans further peace talks aimed at ending the Syrian civil war, elite Syrian army forces are tearing through Idlib province, wrenching control of towns along the way from jihadi forces — or, as some believe, moderate opposition fighters

​The Syrian army's ultimate objective is to control Idlib city. The first phase of its operations on Dec. 26 targeted Abu Zuhur base from Ashtan. The army's elite Tiger Forces moved rapidly under Russian air support and on Jan. 9 captured 12 settlements, moving to within a few miles of the base.

These aggressive moves are making Turkey so tense that it summoned the ambassadors of Iran and Russia and warned them that the Syrian army's moves violate the accord reached in Astana, Kazakhstan, which provides for de-escalation zones guaranteed by Iran, Russia and Turkey. Idlib is in one of those zones. Turkey — no friend to Syrian President Bashar al-Assad — believes he is attacking moderate opposition forces under the guise of combating terrorists.

“Iran and Russia are guarantors of the [Syrian] regime. We are the guarantor of the moderate opposition. Iran and Russia should shoulder their responsibilities and halt the regime,” Turkish Foreign Minister Mevlut Cavusoglu said in a Jan. 10 interview with Turkey’s semi-official Anadolu New Agency. “If Russia and Iran would use their weight, the regime couldn't do what it is doing. The action against Idlib is not only air attacks; the regime is advancing inland."

Turkish President Recep Tayyip Erdogan angrily repeated Turkey’s intention to launch operations against Kurds in Afrin and Manbij, which are currently behind American and Russian barriers.

“The time has come to totally eradicate the project of the separatist organization to create a terror corridor in Syria," he said, referring to the Kurdistan Workers Party (PKK). "We will advance the step we took with the Euphrates Shield operation and complete that process at Afrin and Manbij.”

Turkey’s anger over Idlib thus became public. Erdogan has been saying since Oct. 6, just before launching the Idlib operation, “Russia will provide security of Idlib from the periphery and Turkey internally in the town.”

Ankara is calling for pressure on Damascus, but that is not the only force involved: Iranian-supported militias are helping the Syrian army at Idlib, as are the Russians with air support.

Ankara’s plan was to keep Idlib out of the operation no matter who controlled it until a political solution was found. In October, when Turkey first deployed its troops in Idlib, in line with the de-escalation zone plan, it was actually executing its own plans. When deploying Turkish troops north of Idlib closer to Afrin, Turkey made a deal with Hayat Tahrir al-Sham and coordinated its moves with the group.

According to Hayat Tahrir al-Sham sources, there were three conditions to allow Turkey's army to enter the area without encountering any opposition. One was that the target would be Afrin, where the Kurds have declared autonomy.A second would be that there would be no operation against groups controlling Idlib. The third was that local groups affiliated with Turkey's Operation Euphrates Shield would not enter the area.

Turkey’s deployment — approved and escorted by Hayat Tahrir al-Sham — was not compatible with Iran's and Russia’s definition of the de-escalation zone. Turkey was indirectly providing a shield for the organizations already dominating Idlib.

But cooperation with Turkey caused friction within Hayat Tahrir al-Sham. According to reports, disagreement between Hayat Tahrir al-Sham wing under Abu Mohammed al-Golani, who advocated cooperation with Turkey, and others in the militant group have caused serious, at times bloody, discord. Some sources said killings of at least 35 senior members between September and November were due to these internal frictions. Others thought Turkey was behind this liquidation campaign.

A crisis was inevitable, given the divergences in interpretation of the de-escalation zones between Russia and Turkey. The operations toward Abu Zuhur continued despite Turkey’s objections.

The clashes have intensified in an area some 40 miles (64 kilometers) away from the Turkish line of deployment. Turkey has been determined to avoid any clash with the Syrian army until a political solution is found. But that risk is growing by the day.

Some incidents after the Syrian offensive against Idlib have elements that could trigger confrontation between Russia and Turkey. On Dec. 31, Khmeimim air base, used by Russia, was hit with artillery fire. The Russian Defense Ministry said two Russian soldiers were killed. Syria’s official SANA news agency, quoting Russian sources, said the Vasilyok-type artillery used in the attack had entered Syria via Turkey.

On Jan. 5, the Russian Defense Ministry said, 13 drones were used to attack Russian bases at Tartus and Khmeimim. It said seven drones were destroyed and six were seized. According to Russian newspaper Zvezda, after this attack the ministry sent letters to Turkish Chief of General Staff Hulusi Akar and Turkey’s intelligence chief, Hakan Fidan, to underline the “necessity for Turkey to fulfill its obligations to assure the armed groups controlled by Turkey respect" the de-escalation arrangement.

There were comments in Russian media that Turkey intentionally directed these attacks against the Russians to secure a green light to attack Afrin.

Because the drones used in the attacks took off from Idlib's Muazara area, Russia said that area will no longer be immune to operations. On Jan. 8, near Darat Izza north of Idlib, a rocket struck within a few feet of a Turkish army convoy. The unknown type of rocket from an unknown source was interpreted as warning fire.

It's not yet certain where the fragile relations between Russia and Turkey will go in this tense atmosphere, but it's clear Idlib is becoming a dangerous final stage in the war. It's possible that, in such a risky atmosphere, Ankara is hoping to hold on to Idlib and the triangle of al-Bab, Jarablus and Azaz that Turkey had secured in Operation Euphrates Shield, to use them as a card against Damascus in a settlement process. Such a card would have serious ramifications for the fate of the Syrian president and the future of the Kurds as they seek to build their autonomy in the north.

Until he gets the concessions he seeks for these two key issues, Erdogan doesn’t want the Syrian army to approach the Turkish border and face Turkish troops.