The Turkish military deployment in Idlib has a direct impact on armed factions in the region, some of which have already accused Turkey of implementing Russia’s plans. 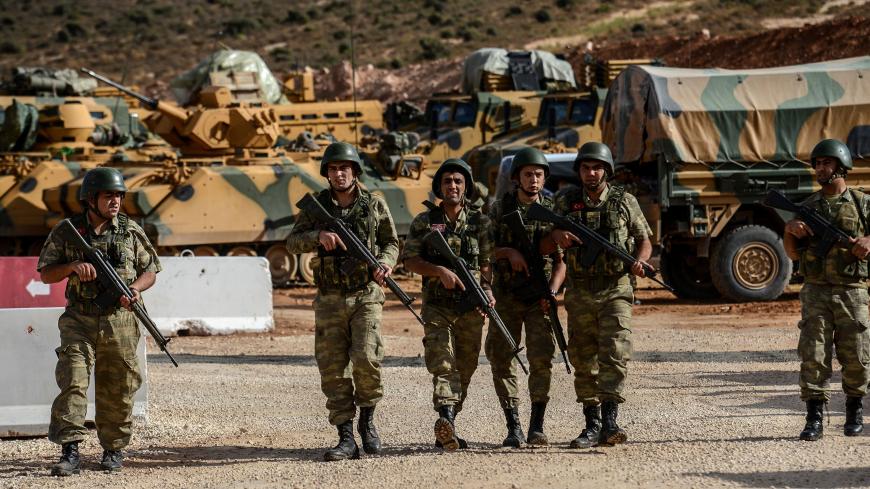 Turkish soldiers stand near armored vehicles during a demonstration in support of the Turkish army's Idlib operation near the Turkey-Syria border near Reyhanli, Turkey, Oct. 10, 2017. - ILYAS AKENGIN/AFP/Getty Images

Ankara’s zigzagging between its fading regional ambitions, national security priorities, the conditions set by its partners in the Astana process and the realities on the ground continue to shift Turkish policy in Syria. The Turkish deployment in Idlib — part of the latest de-escalation zone agreement in Astana — comes as another product of those vacillations and the narrow room Ankara has to maneuver.

Ever since the 1991 Gulf War, Turkish political movements like the ruling Justice and Development Party have upheld the creed that Turkey needs to be actively involved to avoid harm from turmoil in the Middle East.

Operation Euphrates Shield — the seven-month military campaign that Turkey conducted in northern Syria in a bid to block Kurdish advances under the guise of fighting the Islamic State (IS) — was quite gratifying for the government. Involvement on the ground was finally achieved, leading Ankara to assume it will have a say in Syria’s future and prevent a “Kurdish corridor” along its southern borders. The Idlib deployment is driven by the same two objectives: having a say in the political negotiations that will shape Syria’s future and besieging Afrin, the western part of the Kurdish corridor.

Now that the armed rebellion in Syria is dying down, the primary objective is to prevent a full-blown political debacle for Ankara, which has backed the rebels for the past six years. So what is the purpose of the military deployment in Idlib city? Is it to defeat the jihadi groups, a potential threat to Turkey as well, and lay the ground for the Syrian army retaking control of the region, or to prop up allied armed groups against Hayat Tahrir al-Sham (HTS), in the crosshairs as a terrorist group? Turkey's objective of derailing the Kurdish autonomy drive is beyond doubt.

Defeating or at least weakening groups such as HTS that reject the Astana process and the de-escalation plan and substituting them with groups that have allied with Turkey in Operation Euphrates Shield is an important element in Ankara’s new game plan. Certain developments, however, raise suspicions. On Oct. 7-8, the Turkish military sent troops to Idlib for reconnaissance ahead of the planned establishment of observation points, and while doing so it made a deal with HTS. Citing witnesses, Reuters reported that militants from HTS, al-Qaeda’s former Syrian branch, escorted the Turkish soldiers in what looked like collusion, casting doubt on Turkey’s intentions.

Remarkably, Ankara has remained silent on the issue, but some details have emerged from pro-government media outlets. According to the reports, HTS rejected the entry of Euphrates Shield-affiliated groups into Idlib on the evening of Oct. 7. To resolve the crisis, a delegation of Turkish military and intelligence officials met with HTS and negotiated a deal. HTS reportedly agreed only on Turkish military control in the area, rejecting the entry of Free Syrian Army factions into Idlib.

According to a HTS member, the meeting with the Turkish delegation took place in Darat Izza. Another HTS official said the group had agreed to the establishment of three checkpoints by the Turkish military. Asked about the prospect of any imminent clashes, the same source told Syrian journalist Mousa al-Omar, “No. So far, things are good unless Turkey changes its position.”

Turkey’s original plan was to bring in fighters from about 15 factions — referred to as “Euphrates Shield forces” — with a view of replacing HTS. The Turkish reconnaissance units were escorted by members of the Nureddin Zengi Brigade and the Faylaq al-Sham group, while a 800-strong militia selected from factions such as the Sultan Murad Division, the Suleyman Shah Brigade, Sukur al-Shimal and al-Moutasem Brigade was kept on standby in the buffer zone at the Bab al-Hawa border crossing and Atma, just across the Turkish border. It remains unclear whether or when those forces will move into Idlib.

Without mentioning Turkey, HTS openly threatened the Turkish-backed factions for working with Russia, suggesting it is drawing a red line on their involvement. In a statement posted on social media, HTS said Idlib would "not be a picnic" for those factions, adding that “the lions of jihad and martyrdom are waiting to pounce.”

Paying attention to the threat will require Turkey to back down from its original plan. Sources close to the government were saying that the order established in the Jarablus-al-Bab-Azaz triangle in the wake of IS could be replicated in Idlib as well. Allied militia groups have had an important role in this model in the Euphrates Shield area.

Though many in the opposition camp have criticized Turkey for collaborating with Russia and Iran in the Astana process, which essentially aims to end the armed rebellion in Syria, Turkey has been making efforts in the opposite direction as well. For some time, Ankara has been trying to unite factions it considers allies in a so-called national army. On Aug. 30, the “Syrian Interim Government” and the Syrian Islamic Council, which are based in Turkey, had called on the factions to join that national army. More than 40 groups, including Ahrar al-Sham, Faylaq al-Sham and al-Jabhat al-Shamiya, have agreed to heed the call. Some groups active at the Jordanian border and Jaish al-Islam, which is active in the Damascus countryside, have also said they could join.

Similar umbrella organizations have had little success in Syria so far. The “national army” project's chances seem no better, especially now that opposition forces are collapsing. Moreover, the Idlib operation has already begun and the project has yet to take shape, meaning Turkey will have to make do with the Euphrates Shield-affiliated factions if it intends to expand its Idlib operation.

Another predicament for Ankara’s Idlib plans stems from the objections of groups that Ankara itself has supported so far. The expansion of HTS has been nourished since January by indignation with the settlement plan that Turkey has been drawing up with Russia and Iran. Yet, the course of events presents two inevitable options to those groups: accept the de-escalation plan and join the political negotiations or find themselves besieged by the Syrian army in the south, the Russian air force in the skies and the Turkish military in the north.

HTS is believed to be unwilling to fight the Turkish military. Its flexible stance could lead to the split of radical elements and the birth of a new faction, just as radical elements within Ahrar al-Sham, a group that collaborates with Turkey, split and joined HTS in recent months. Following the July clashes that wiped Ahrar al-Sham from Idlib, Turkish intelligence operations secured the defection of certain individuals and groups from HTS. Now, some groups inside HTS that are more loyal to the al-Qaeda ideology and reject any compromise are said to be readying for a revolt. This development coincides with the emergence of new group called Ansar al-Furqan fi Bilad al-Sham, which openly says it will fight Turkey and the factions it supports, showing that a jihadi streak will continue to exist despite all efforts for compromise. For Turkey, these factors are stoking the risk of clashes.

Atop the annoyance that the Astana process has created among opposition groups, Turkey is pointing the groups allied with it at the Kurdish regions. Many factions see it as a deviation from their “revolutionary” goals.

Normally, Turkey is supposed to establish 14 checkpoints and deploy a 500-strong team of observers, but if it makes do with just surrounding Kurdish-held Afrin from the south without going too deep into Idlib, it could limit the ramifications of the operation on the ground. After all, suffocating the de facto Kurdish autonomy in the region is now the cornerstone in Turkey’s calculations in Syria.

At first glance, one may suggest that HTS will not object to a military deployment besieging Afrin from the south in order to avoid a larger conflict. Yet, the plan still involves some serious uncertainties. Judging by the map of control zones leaked to the Turkish media, the Turkish military is supposed to enter a region encompassing Idlib city, Darat Izza, Jisr al-Shughur, Maarat al-Numan and Khan Shaykhun. Heeding this plan could trigger new rifts between factions that see fighting the regime as an essential objective.