Turkey might have to do its own dirty work at Idlib 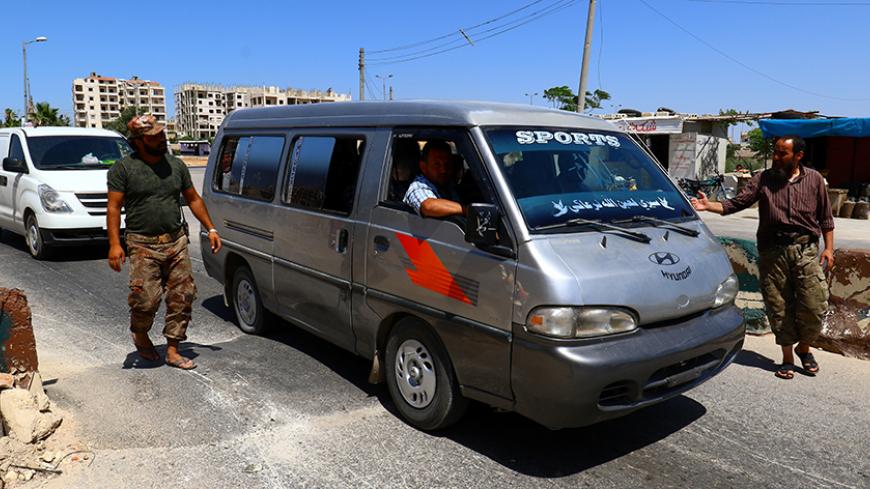 HTS captured more than 30 locations in the clashes of July 18-24, decimating Turkish-backed Ahrar al-Sham and its allies, who were forced to retreat from Idlib south to rural Hama. HTS gained control of areas with border crossings to Turkey. Only the Bab al-Hawa border crossing opposite Turkey’s Cilvegozu was handed over to a neutral civilian administration after the adversaries reached an agreement July 21.

What course will Turkey take now that the field situation at Idlib has shifted in al-Qaeda’s favor? What problems might Turkey have to deal with?

So as not to disrupt the humanitarian and military assistance coming through the Turkish border, Jabhat Fatah al-Sham (formerly Jabhat al-Nusra), the key force of the HTS coalition, had stayed away from the border crossings since Idlib was captured in March, although Bab al-Hawa and the unofficial crossing of Khirbet al-Jouz were the main sources of revenue for Ahrar al-Sham. Ahrar al-Sham lost control of Bab al-Hawa and Khirbet al-Jouz when clashes resumed after the July 21 cease-fire. HTS, aware of the vital importance of keeping the border crossings open, agreed to allow Bab al-Hawa to be managed by a neutral civilian administration.

Turkey can't stop humanitarian relief from crossing into Syria, but it might decide to use the border crossings as leverage to force HTS to cooperate with Ahrar al-Sham. Turkey might also provoke civil society bodies of the Syrian National Coalition that are not comfortable with the presence of HTS. Some civil society groups already have demonstrated against HTS.

But HTS, which is determined to block Turkey's moves to extend Operation Euphrates Shield to Idlib, probably won't agree to coexist with Ahrar al-Sham.

These changes in the field's power configuration are likely to alter Turkey’s plans for Idlib and Afrin. Until July 27, Ankara’s plan for the border was to mobilize its local Euphrates Shield forces based in the Azaz/al-Bab pocket to expel the Kurdish People's Protection Units (YPG) from Tel Rifaat and Menagh and then open a corridor between Azaz and Idlib. Next would have been to push away the HTS forces north of Idlib and put that area under the control of opposition forces sponsored by Turkey. Finally, Idlib would be declared a deconfliction zone as per the accord reached with Russia at Astana, Kazakhstan.

What Turkey really wanted was to lay a tight siege on Kurdish-controlled Afrin, which today is mostly surrounded from the northeast by Turkish-backed forces. Nevertheless, the people of Afrin can still reach Aleppo and Manbij via Tel Rifaat. These were all plans Ankara wanted to implement with its ally Ahrar al-Sham and related groups. But now Ankara has realized that Ahrar al-Sham can't be the linchpin of a strategy against HTS.

The Ahrar al-Sham collapse at Idlib left Turkey with two difficult choices for the future of the area. Either Turkey will enter into a direct confrontation with HTS or will agree to have Russia and Syria carry out operations in the same area. The first option means those living in Idlib would flee to areas under regime control; the second option means they would have to escape to Turkey — and Ankara doesn’t want even one more single refugee.

Turkey’s military intervention at Idlib could well lead to reactions different than the ones it dealt with when its adversary was on the Jarablus/al-Bab front. Turkey, through coalition intelligence operations rooms at Antakya and Gaziantep, has for a long time supported both Jabhat Fatah al-Sham and Ahrar al-Sham. To declare HTS, Jabhat Fatah al-Sham's umbrella group, an enemy could turn the guns on Turkey. Many opposition groups, despite their internal squabbling, might declare Turkey an occupation force.

Kurdish and Turkish news media talk of scenarios without having adequate background information. According to theories in Kurdish media, Turkey has realized the Syrian Democratic Forces, affiliated with the YPG, will turn toward Idlib after liberating Raqqa. So, the theory goes, Turkey has decided to eliminate its own ally, Ahrar al-Sham, as a power on the ground so that Turkey itself can occupy the Idlib region. Turkey could enter the area with the pretext of cleansing it of al-Qaeda.

Interestingly, this theory gets support from the Turkmen front. Turkmen National Movement Party Vice President Tarik Sulo Cevizci thinks Turkey will not allow al-Qaeda to dominate the Idlib region and will intervene with its own army. "Turkey wants to enter and stay in that area. Ongoing clashes in Idlib may provide Turkey with circumstances that could justify intervention,” he said.

Turkey sees itself as a game maker at Astana. But it was Ahrar al-Sham’s initial field superiority that provided Turkey with strong cards to play. Ahrar al-Sham relinquished most of his field leverage when it lost control of the area and some of its allied groups. Although the Nureddin Zengi Brigade, which the United States supplied with TOW anti-tank missiles, has declared it is splitting from HTS and will remain neutral, 19 other groups (some of them miniscule) joined HTS July 18-24.

Local security sources say the Qatar crisis has also weakened Ahrar al-Sham and its allies. These sources claim it was Ahrar al-Sham joining the Astana cease-fire process and its affiliation with Turkey’s Operation Euphrates Shield that actually empowered HTS and allowed it to impose its control over the area. On May 12, HTS had arranged sermons in mosques denouncing Turkey. Soon after that, it began attacking Ahrar al-Sham.

Jabhat Fatah al-Sham, which recently was forced to agree to a cease-fire in its clashes with Hezbollah and the Lebanese army in Lebanon's Arsal border area, is now expected to transfer those 1,500 fighters to Idlib. That means an experienced combat detachment will reinforce HTS.

Idlib has emerged as the place where Syria’s war is likely to be decided. Fighters evacuated from different parts of Syria have been relocated to Idlib. But that war is not imminent, not yet. The Syrian army is still focusing on Raqqa and the energy-rich areas of Homs, Deir ez-Zor and Palmyra. Such a widespread front makes a concentrated operation at Idlib beyond reach for the time being. With Idlib as the last act in the approaching conflagration, the worst burn victim of those flames could well be Turkey.