After the Aleppo rout, Turkey considers boosting the ranks of its Free Syrian Army ally fighting in Operation Euphrates Shield, while fortifying the buffer zone and raising the bar in bargaining with Damascus. 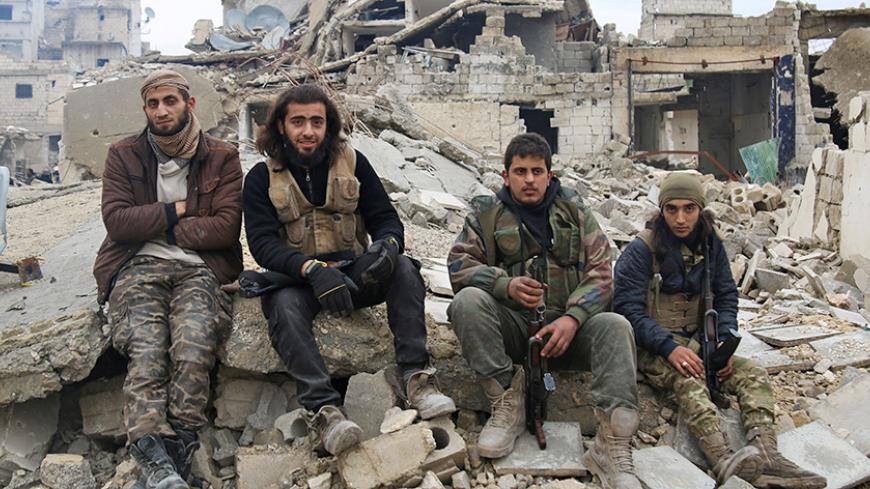 Rebel fighters sit on the rubble of damaged buildings as they wait to be evacuated from a rebel-held sector of eastern Aleppo, Syria, Dec. 16, 2016. - REUTERS/Abdalrhman Ismail

Although the Syrian armed opposition has lost its six-year war to declare Aleppo the “capital of the revolution” and the Syrian equation has changed drastically, the curtain is not yet down on this act of the bloody play.

Washington is idling and staying aloof while waiting for President-elect Donald Trump to take over, which has enabled Iran and Russia to complete their operations in Aleppo by sidelining Turkey. Militants and their families evacuated from Aleppo were transferred to Idlib.

Everyone will try to find out what strategy Turkey — which mediated the withdrawal of armed groups, especially Jabhat Fatah al-Sham (formerly Jabhat al-Nusra), as it had promised Russia — has in mind now. One Turkish approach being discussed indicates that Turkey wants to transfer some groups to Turkey via Hatay and then via Kilis to the Azaz/al-Bab front in Syria. The groups for transfer are ones that have been moved to Idlib but are not likely to stay there because of their issues with the dominant power, Jabhat Fatah al-Sham. The goal of this would be to reinforce the field elements of Operation Euphrates Shield with this new supply of fighters.

A senior official of the Sultan Murad Brigade raised many eyebrows when he told Reuters that after leaving Aleppo, his group will join Turkey’s Euphrates Shield operation.

Al Jazeera quoted opposition sources who said the brigade, along with Fatih Sultan Mehmet and Nureddin Zengi Brigade, which were transferred to Idlib, will next be moved to al-Rai and Jarablus, which has been cleared of the Islamic State (IS), and participate in the siege of al-Bab.

Some units of the Sultan Murad Brigade and Ahrar al-Sham are already taking part in Operation Euphrates Shield. Of course, it would be naive to claim that all the opposition organizations leaving Aleppo are keen to be soldiers under the tutelage of the Turkish army. Some of them accuse Turkey of eroding their manpower by recruiting Free Syrian Army militants for its campaign against the Syrian regime, hence blaming Turkey for the loss of Aleppo. But those who have moved to Idlib are likely to have problems with Jabhat Fatah al-Sham. Such militants will either give up their arms or accept Turkey’s offer.

Operation Euphrates Shield was launched under the premise of fighting IS, but the real goal doesn’t seem to have changed: Eliminate the operational plans of the Kurds.

At the outset, the Kurds wanted to open a corridor via Azaz-Jarablus parallel to the Turkish border to link their Afrin and Kobani cantons. When Euphrates Shield foiled that plan, the Kurds thought of opening a southern corridor between Manbij and Afrin, some 24 miles to the south by taking advantage of the Kurdish settlements scattered over that area. Turkey also blocked this move. The US decision to keep the Kurdish-led Syrian Democratic Forces in a passive deployment west of the Euphrates River helped Turkey’s ambition. Ankara wants to beef up the local manpower of Euphrates Shield and persuade Washington to give up its partnership with the Kurds. Beyond that, Ankara — by making use of its cooperation with Russia — wants an all-out campaign against Rojava (Syrian Kurdistan) cantons to eliminate any likelihood of an autonomous Kurdish entity.

In the region there are humorous rumors of a “Give Aleppo, take al-Bab” horse trade in the works. Turkey, which for five years could not persuade the United States to agree to a buffer zone or a safe zone, is now trying to make that a part of bargaining with Iran and Russia. Ankara has also been encouraged by Trump’s statement at a Dec. 15 rally in Hershey, Pennsylvania, that “we will set up safe zones in Syria.”

After the rout at Aleppo, the front line will inevitably shift toward the Turkish border. Ankara sees a buffer zone as a way to prevent a massive push up against its borders by militant groups and their families who are taking refuge in Idlib, or by inhabitants of the region. The same situation also applies to the 24-mile-deep, 60-mile-wide pocket opposite Turkey’s Kilis border area. The Turkish Red Crescent aid group is preparing a tent city at Idlib some 3 miles from the border. Turkish Red Crescent President Kerem Kinik said, “Preparations are being made for 10,000 people, but I don’t think we will need [to accommodate] that many.” Other humanitarian organizations are also erecting tents.

To sit at the negotiation table with Damascus over the liberated areas of Idlib and Azaz/al-Bab is another aspect of the issue. A de facto buffer zone will be a trump card in Turkey’s hand to prevent total marginalization of armed groups and to use them as a bargaining chip in a political process. Russia also wants to activate a political negotiation mechanism while expanding its military operations. Russian President Vladimir Putin, parallel to the political solution process in Geneva, also plans joint negotiations with Turkey in Kazakhstan for the opposition groups. Suggesting these negotiations could be held in the Kazakh capital of Astana, Putin said: “The next step [after Aleppo] will be to reach agreement on a complete cease-fire across all of Syria. We are actively negotiating with members of the armed opposition, with the mediation of Turkey."

This shift of the peace initiative from the West to Asia is a totally new development. But realistically, a positive outcome of this initiative depends on the attitudes of the other financial backers of the stronger armed groups. Countermoves by the US, together with regional partners Saudi Arabia and Qatar, could spoil the new Russian-Turkish designs.