Is Erdogan promising a ghost army in Syria?

Erdogan promises to set up a “national army” in the area to be cleansed from the Islamic State in northern Syria, but with the combat assets available to him, never mind a national army, even a force to secure the cleansed area will not be easy. 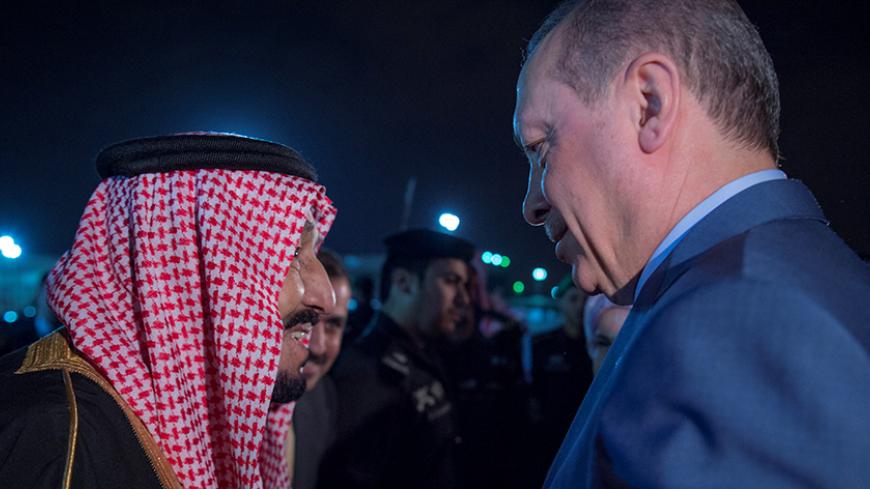 When talking to the Russians, Turkish President Recep Tayyip Erdogan emphasizes Syria's territorial integrity and a peaceful resolution to that country's civil war. When talking to the Americans, Erdogan advocates a US-Turkish partnership that will also include a buffer zone. When he is conversing with Gulf leaders, the Turkish president slams Tehran and Damascus. A Syrian policy with a truly oriental flavor!

In his recent Gulf tour of Bahrain, Saudi Arabia and Qatar, and in violation of the spirit of the Astana process jointly promoted with Russia and Iran, Erdogan expanded its targets in Syria. According to the Turkish president, Operation Euphrates Shield will continue after ousting the Islamic State (IS) from al-Bab. The new objectives will be Manbij and Raqqa in a three-phased operation. First will be setting up a "terror-free safe zone," which must also be covered by a no-fly zone. Second, Arabs and Turkmens will be settled in the safe zone. Finally, a national army will be established through a "train and equip" program.

There is also an enticing economic dimension to this extravagant project. After turning an area of 1,930 square miles into a safe zone, Turkey will build new housing for refugees.

In the heat of Erdogan's flamboyant comments, government spokesman and Deputy Prime Minister Numan Kurtulmus issued a statement: "With al-Bab, Euphrates Shield will be over as goals will have been achieved. Raqqa is something else. It doesn't threaten Turkey's borders." But Kurtulmus' words were largely ignored.

This wasn't the first time Erdogan voiced his "safe zone/no-fly zone" proposal. The narrative, however, has undergone changes since Turkey developed a partnership with Russia over the evacuation of Aleppo in December. Erdogan has now made a sharp U-turn after CIA director Michael Pompeo’s Feb. 9 visit to Ankara. The Turkish president had referred to a "national army" and safe zone also in December: "For years, we have been calling for a no-fly zone along our border and a safe zone of a maximum of 5,000 square kilometers (1,930 square miles). We also said let's set up a national army in this zone made up of moderate opposition elements. The regime by putting the pressure on Aleppo has been trying to push the people of Aleppo toward Gaziantep. We will not allow this plan."

For a long while, Erdogan cited the scenario of a potential refugee flow from Aleppo to justify his safe zone idea. But the civilians evacuated from eastern Aleppo did not come to Turkey as he had been forecasting. Those who came to Idlib under Turkey's protection are military groups and their families. Thus, the pretext of a potential refugee flow lost its validity.

There are even signs that the refugee movement now is not from Syria to Turkey but from Turkey to Syria. Journalist Mehmet Bedri Gultekin wrote that after the Syrian army retook Aleppo, some people from Gaziantep actually moved back to Aleppo. According to Gultekin, "Three families of a total 22 persons who lived in Sahinbey township, Sakarya neighborhood, Karacoma Baba Street No. 51 last week moved back to Aleppo. Three Syrian workers 10 days ago sent their families back to Aleppo. You will hear similar stories from anyone you speak to in Gaziantep."

Local sources Al-Monitor spoke to said this was not yet a mass movement of people, but there are families who have been going back since the Syrian army took over Aleppo.

Despite all these developments, Erdogan's narratives remain the same:

This last point is exceptionally important for Turkey’s security. Erdogan has no intention of letting the fighter potential that has piled up at Turkey's border after evacuating Aleppo to remain idle or pose a threat. This is the potential he has identified for the national army that he wants to set up in the area already cleared between Azaz and al-Bab. The TSK escorted some of the anti-regime opposition groups from Jarablus to al-Bab. But can this potential be reconfigured into a national army?

Although it sounds like an impressive lineup of armed groups, they haven't until now given the impression that they can advance without the firepower and guidance of the TSK or even hold on to a cleared area on their own. Also, nobody really knows how many fighters these groups have put under TSK's orders.

Before Euphrates Shield was launched, the TSK had given artillery support to these groups for forays around Jarablus and al-Rai, but each time they were routed and fled. The TSK then realized that, without its active support, these groups could not control the terrain.

Although some recent successes in the field have again made the militias attractive, what is not at all transparent is the true strength of the diverse groups. There is no reliable data about them, giving the impression that the usefulness of a motley group of militiamen may be overblown. The potential Erdogan had set his eyes on is melting away with their endless internal squabbles. Many groups associated with Jabhat Fatah al-Sham (formerly Jabhat al-Nusra) now clash with groups that have allied with Ahrar al-Sham, which is gaining prominence among religious factions. Some groups fighting under Ahrar al-Sham have already decided that joining Euphrates Shield is against their interests. In other words, receiving support from Turkey does not guarantee that they will become Turkey's soldiers.

Looking through the photographs and videos of the al-Bab operation, it is hard to see an effective force in the making. It is impossible to avoid the impression that these are armed hordes that open fire haphazardly and are ill-disciplined, untrained and inexperienced. The TSK had to revise its strategy at al-Bab because of this serious deficiency. While the TSK thought it would suffice to give provide support with armored operations and air attacks, soon it had to push its elite commando units to the front lines. Today, these units are directly clashing with IS.

In the meanwhile, Turkey is also training police forces for the liberated areas near its border. So far Ankara hasn't yet named them the "Syrian National Police." The first group of 434 were trained in the Turkish town of Mersin by the Mediterranean and deployed to Jarablus and al-Rai, which freed the militias serving as local security in those towns to be deployed to the al-Bab front.

The train-and-equip program Erdogan has been promoting as a panacea already has been tried and failed many times. Beyond impediments on the field to establish an effective and reliable force, there are also political obstructions, such as Russia. Vladimir Putin must have something to say about Erdogan's plans for a national army and a buffer zone.

Let's see what Erdogan, who has strong economic expectations from the Gulf, tells Putin the next time they meet.