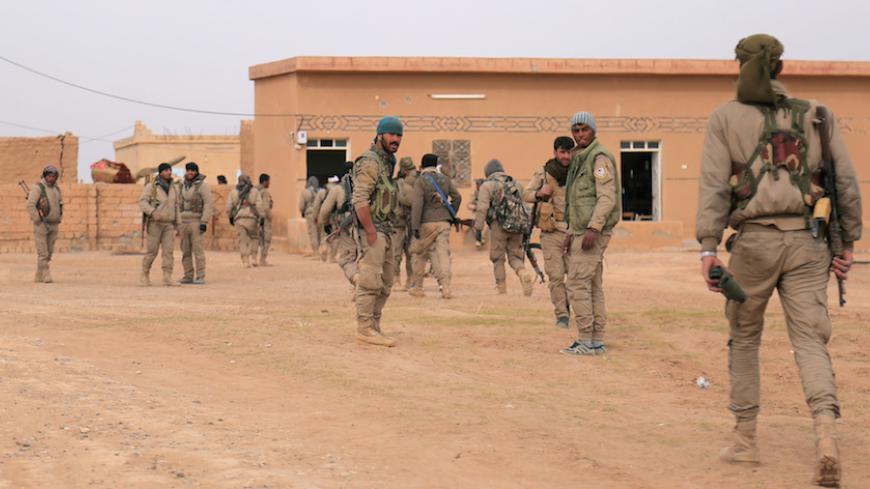 US not persuaded to ditch Syrian Kurds

Fehim Tastekin writes this week that Turkish President Recep Tayyip Erdogan’s expansive goals for Syria include a “Manbij and Raqqa in a three-phased operation. First will be setting up a ‘terror-free safe zone,’ which must also be covered by a no-fly zone. Second, Arabs and Turkmens will be settled in the safe zone. Finally, a national army will be established through a 'train and equip' program.”

Erdogan’s top priority remains the defeat of the Syrian Kurdish People’s Protection Units (YPG), the armed wing of the Democratic Union party (PYD), which Turkey links with the Kurdistan Workers Party (PKK), which it considers a terrorist group. Turkey launched Operation Euphrates Shield in August to break the influence of the PYD and PKK, as well as the Islamic State (IS), in northern Syria.

Erodgan’s war against the Syrian Kurds seems to be the cause of irreconcilable differences with the United States over Syria. The US counts on the YPG as the core of the Syrian Democratic Forces (SDF), its key on-the-ground partner in Syria. US plans for an attack on Raqqa, IS’ ‘"capital" in Syria, reportedly depend on the SDF for the first assault wave.

Amberin Zaman reports that a high-level Turkish delegation led by Foreign Ministry Undersecretary Umit Yalcin mostly failed in its appeal for the United States to ditch the SDF in meetings with US Undersecretary of State for Political Affairs Tom Shannon, former national security adviser Michael Flynn before he resigned, CENTCOM commander Gen. Joseph L. Votel and others in Washington last week.

“Sources familiar with the substance of the exchanges told Al-Monitor on strict condition of anonymity that Turkish demands that the United States drop its plans to free Raqqa with the YPG-led Syrian Democratic Forces (SDF), labeling them terrorists, elicited a frosty response,” Zaman writes. “The stiffest demurral came from Votel, the sources said. ‘He explained his position like a soldier would, it was quite tough,’ one source observed. During the encounter, CENTCOM officials reminded the Turks that having talked about putting Turkish boots on the ground for Raqqa as an alternative to the YPG, the Turkish General Staff had yet to present a blueprint detailing Turkey's operational plans and precise contribution. The Turks got their most sympathetic hearing in the White House, the sources added, declining to elaborate.”

The Washington Post reported earlier this month that the US reliance on the SDF is the result of Turkey’s failure to provide alternative forces. Erdogan still seeks to leverage the Turkish Armed Forces (TSK) association with an array of armed groups, most of which are Turkmens and others that are Salafi in orientation, to be the backbone of a security force for northern Syria.

Tastekin’s analysis underscores the questionable capacity of these forces. “Although some recent successes in the field have again made the militias attractive, what is not at all transparent is the true strength of the diverse groups,” he writes. “There is no reliable data about them, giving the impression that the usefulness of a motley group of militiamen may be overblown. The potential Erdogan had set his eyes on is melting away with their endless internal squabbles. Many groups associated with Jabhat Fatah al-Sham (formerly Jabhat al-Nusra) now clash with groups that have allied with Ahrar al-Sham, which is gaining prominence among religious factions. Some groups fighting under Ahrar al-Sham have already decided that joining Euphrates Shield is against their interests. In other words, receiving support from Turkey does not guarantee that they will become Turkey's soldiers.”

Tastekin adds that “looking through the photographs and videos of the al-Bab operation, it is hard to see an effective force in the making. It is impossible to avoid the impression that these are armed hordes that open fire haphazardly and are ill-disciplined, untrained and inexperienced. The TSK had to revise its strategy at al-Bab because of this serious deficiency. While the TSK thought it would suffice to provide fire support with armored operations and air attacks, soon it had to push its elite commando units to the front lines. Today, these units are directly clashing with IS.”

Tastekin also explains Erdogan’s shifting, and questionable, rationale for a safe zone in northern Syria. “For a long while, Erdogan cited the scenario of a potential refugee flow from Aleppo to justify his safe zone idea. But the civilians evacuated from eastern Aleppo did not come to Turkey as he had been forecasting. Those who came to Idlib under Turkey's protection are military groups and their families. Thus, the pretext of a potential refugee flow lost its validity. … There are even signs that the refugee movement now is not from Syria to Turkey but from Turkey to Syria. … Local sources Al-Monitor spoke to said this was not yet a mass movement of people, but there are families who have been going back since the Syrian army took over Aleppo.”

The high price of "no" in Turkey

Pinar Tremblay reports, “Saying no can have a high price tag for ordinary Turks as pressure builds in the days leading up to an April 16 referendum on constitutional amendments designed to widely expand the president's powers.”

“Their fear is warranted,” Tremblay writes. “Several AKP members, including Cabinet ministers and the prime minister, have indicated multiple times that saying no is what terrorists would do. The most worrisome statement came Feb. 12 from Erdogan himself. When asked about current polls, Erdogan was unhappy. He said, ‘It is too early to gauge the health of the polls’ because he had not yet started actively campaigning. Erdogan told the press, ‘April 16 will be the answer to July 15 [the day of the coup attempt]. Those who say no will be siding with July 15.’ … Despite all the public pressure, some brave individuals have taken the risk — and paid the price. … There have also been multiple stories of brutality and intimidation of those who attempt to join rallies or refuse to distribute pamphlets, or who simply tell others that they plan to vote against the referendum. There has been so much of this talk that people have started questioning if the vote will be done through open or secret balloting, and whether those who dare to say no will be taken into custody after they vote.”

Russia "patient" on US plans for Syria

US Secretary of Defense James Mattis ruled out, at least for now, military cooperation with Russia in Syria.

“We do not — or, are not in a position right now to collaborate on a military level, but our political leaders will engage and try to find common ground or a way forward where Russia,” Mattis said at a press conference at NATO headquarters in Brussels.

Maxim Suchkov writes, “At this point, Russia isn’t pinning all its hopes for Syria and beyond on potential cooperation with the United States. Moscow continues to engage with a number of regional players and intra-Syrian factions, calculating its own challenges, opportunities and further moves. Yet the United States remains a critical go-to player. While the Kremlin continues to promote its interests via other means, it will wait patiently until the Trump administration gets a sense of how to best approach Russia.”