A high-level delegation of Turkish Foreign Ministry, military and intelligence officials has failed to persuade the United States to exclude the Syrian Kurdish People’s Protection Units from a planned offensive to liberate Raqqa. 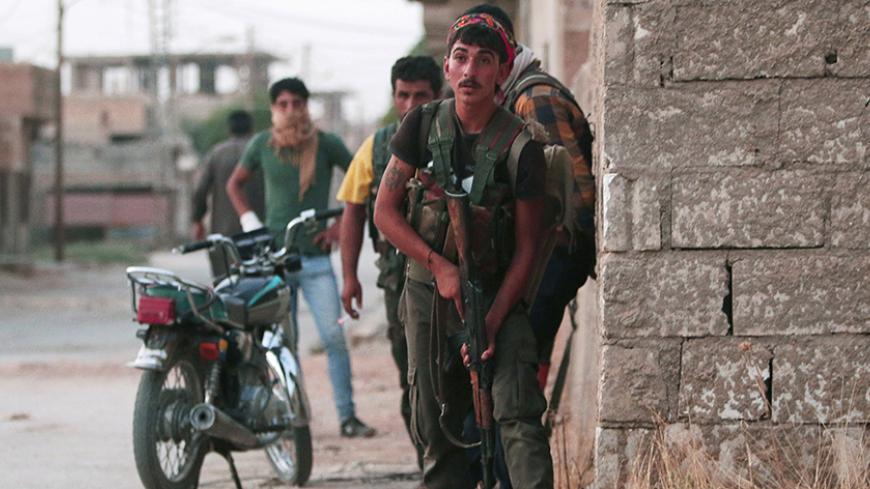 Kurdish fighters from the People's Protection Units carry their weapons as they take positions in the northeastern city of Hasakah, Syria, Aug. 20, 2016. - REUTERS/Rodi Said

As Turkish leaders continue to make hawkish noises about Raqqa, a high-level delegation seeking to persuade the United States to exclude the Syrian Kurdish People’s Protection Units (YPG) from a planned offensive to liberate the city from the Islamic State left Washington empty-handed, Al-Monitor has learned.

The team headed by Turkish Foreign Ministry Undersecretary Umit Yalcin and comprising the heads of the ministry’s US, Iraq and Syria departments along with senior members of the Turkish Armed Forces and the national spy agency MIT, pushed their case against the YPG in separate meetings on Feb. 13-14 with US Undersecretary of State for Political Affairs Tom Shannon, former national security adviser Michael Flynn before he resigned and CENTCOM commander Gen. Joseph L. Votel, among others.

Sources familiar with the substance of the exchanges told Al-Monitor on strict condition of anonymity that Turkish demands that the United States drop its plans to free Raqqa with the YPG-led Syrian Democratic Forces (SDF), labeling them terrorists, elicited a frosty response. The stiffest demurral came from Votel, the sources said. “He explained his position like a soldier would, it was quite tough,” one source observed. During the encounter, CENTCOM officials reminded the Turks that having talked about putting Turkish boots on the ground for Raqqa as an alternative to the YPG, the Turkish General Staff had yet to present a blueprint detailing Turkey's operational plans and precise contribution. The Turks got their most sympathetic hearing in the White House, the sources added, declining to elaborate.

The meetings came as the administration of Donald Trump mulls plans for action against IS in Syria. They include a proposal left over from the previous administration for the Pentagon to provide heavy weapons to the SDF under a presidential dispensation that permits the Defense Department to arm and train nonstate military actors. That plan is currently being refined, not “tossed,” as reported earlier by The Washington Post, a senior administration source told Al-Monitor on condition that he not be identified by name. Another administration official who also sought anonymity corroborated this version of events.

Turkey is bent on preventing the train-and-equip order for the YPG from getting signed. But this week’s meetings between US and Turkish officials suggest that the battle may have been lost. What are the likely consequences? Will Turkey deliver on earlier threats to rescind coalition access to the Incirlik Air Base? Probably not. “That would be too radical a move,” a Turkish official explained on condition of anonymity. A more likely outcome is that Turkey would escalate attacks against the YPG in areas where American special forces embedded with them would not be at risk of getting struck. But what if they accidentally did?

Tensions over the YPG highlight Washington’s lack of strategic thinking, putting its immediate goals above the long-term effects of their execution. They also make it clear that Ankara’s refusal to acknowledge its own actions remain the primary source of chronic and destabilizing discord with the Kurds. Turkey labels the YPG a threat to its own national security over the group’s intimate ties with the Kurdistan Workers Party (PKK), which is waging a ruthlessly bloody campaign for Kurdish autonomy inside Turkey. The government has cast aside all attempts to reach a peace agreement with imprisoned PKK leader Abdullah Ocalan and reverted to its long-running and unsuccessful military effort to defeat his men. This policy has now been expanded to include the YPG. Meanwhile, thousands of pro-Kurdish activists and politicians have been locked up on thinly supported terror charges.

The PKK is listed as a terrorist organization by the State Department but the YPG is not, and the distinction allows the United States to partner with the YPG. Several Turkish officials called Washington’s willful duplicity in the matter “disgusting” in private conversations with Al-Monitor. US officials retort that maintaining the fiction enables them to help Turkey pursue PKK targets militarily without compromising their fight against the jihadis. But that is fiction, too. Should Washington follow through with offers to target top PKK leaders in their mountain hideouts on the Iraq-Iran border, as advocated in a recent op-ed penned by former Deputy Secretary of State Tony Blinken for The New York Times, “they can forget about getting the Kurds to do Raqqa,” fumed a senior member of the pro-Kurdish Peoples’ Democracy Party in a interview with Al-Monitor.

For now, Ankara has put the brakes on the anti-American vitriol pervading the government-controlled media and toned down its own America bashing in the hopes that the Trump administration will prove more accommodating than the last. While hopes are fading on the YPG front, Ankara remains cautiously optimistic that its demands for the extradition of Fethullah Gulen, the Pennsylvania-based Sunni cleric accused of masterminding the failed July 15 coup, will be rewarded.

As things stand, Turkish and Syrian Kurdish officials increasingly concede that the main question now is not so much which force will be used to liberate Raqqa but rather what happens in the aftermath. Will US forces and civilian contractors stay on to help with stabilization to prevent a jihadi comeback? Or will the United States strike some kind of deal with the Russians and the Syrian regime and pack up and leave? Whatever the outcome, Turkey and the Syrian Kurds will remain neighbors. And for as long as they remain mutually hostile, both sides stand to lose.