US, Kurds to clear path toward Raqqa, with or without Turkey

Because of Turkey's objections to Kurdish involvement, operational plans against the Islamic State keep changing. 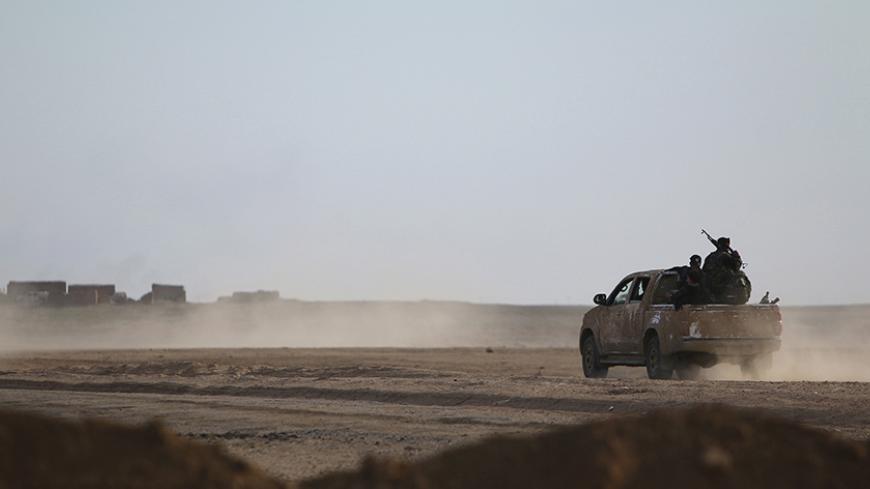 Fighters from the Democratic Forces of Syria drive to position themselves in Ghazila village after taking control of the town from Islamic State forces in the southern countryside of Hasakah, Syria, Feb. 17, 2016. - REUTERS/Rodi Said

More fronts are opening up against the Islamic State (IS) in Iraq and Syria. In Iraq, government forces conducting probes against Mosul, which has been under IS control for two years, are also working to liberate Fallujah, while in Syria a major operation is underway against the IS stronghold of Raqqa.

Syrian Democratic Forces (SDF) led by the Kurdish People's Protection Units (YPG) and its women's brigade, the Women's Protection Units (YPJ), launched an operation north of Raqqa with US air support May 24, immediately after US Central Command (CENTCOM) Commander Gen. Joseph Votel's visit to Kobani, Syria and Ankara. Two Syrian towns on the border with Turkey, Jarablus and al-Rai, are IS' only gates to the outside world and figure highly in the plans, as their loss would be a serious blow to IS. The United States, however, postponed YPG plans to liberate Jarablus because of Turkey's red line against the Kurds, focusing instead on Manbij. But when negotiations with Ankara over Manbij did not proceed in the desired manner, plans shifted to rural Raqqa.

In the Raqqa plan, which Kurdish sources who spoke to Al-Monitor call "the biggest operation of the past two years," coalition planes bombed IS targets south of Ain Issa. As SDF units on the ground conduct a three-pronged advance, about 250 US troops are giving them coordination support behind the front lines.

The objective for the time being is not to enter Raqqa's town center, but to clear the way. Ain Issa is 55 kilometers (34 miles) north of Raqqa.

YPJ Commander Rojda Felat said in a May 24 press briefing, "We are launching this move with the participation of SDF units to free Raqqa. We are supported also by Tahrir ar-Raqqa Brigade and international coalition warplanes. This action also aims to prevent any attacks against our people at Jazeera, Gire Spi and Kobani."

SDF Commander Abu Fayyad said, "Our goal is to save the regional population from the cruelty of IS gangs. With this move we will liberate [the area] north of Raqqa."

Knowing how IS treats women, having a woman announce an operation against the group was an interesting touch.

A source close to the negotiations between the Americans and the Kurds spoke to Al-Monitor on condition of anonymity about the operational planning.

"In the first phase they will go as far as 10 kilometers [6 miles] south of Ain Issa. This is the area from where [IS] launches attacks against Kobani, Tell Abyad and Hasakah. There is no intention to enter Raqqa during this phase. When the operation ends around Ain Issa, a second phase will be initiated toward Manbij and rural al-Bab. The United States will support these operations. But US reservations about operations at Azaz and Jarablus continue. Americans won’t get involved at Azaz and Jarablus fronts because they promised Turkey they will stay out. The Americans want to refocus on Raqqa after the Manbij-al-Bab front."

Asked if Kurds would enter Jarablus without US support, or if the United States would stop them from doing so, a Kurdish source said, "The United States will not interfere if the Kurds mount an operation there. They say, 'You are on your own.'" As for a possible date for the Raqqa operation, the source said, "Americans want a victory at Raqqa and Mosul before their elections. Kurds want to open a corridor from Kobani to Afrin. Of course all this may change with new actors after the elections. That is why the Kurds want to make progress on their own plans before the elections."

Another reason for the Raqqa operation's delay is that the SDF's operational capacity still leaves much to be desired. It is not an option for the Kurdish YPG-YPJ to control Raqqa, because they will encounter local resistance. They also worry that scattering their forces in Arab regions could weaken the defensive lines of Rojava (Syrian Kurdistan). Therefore, Arab forces would have to get in shape to control the situation in the post-IS period.

In the northern front, the situation is still extremely complicated in areas adjacent to the Turkish border. Votel, who came to Ankara after meeting with SDF and YPG commanders at Kobani on May 23, met in Ankara with Gen. Yasar Guler, the deputy chief of the Turkish general staff, and Foreign Ministry officials. According to a May 24 report in the daily Hurriyet, Votel was told Turkey will not contribute to a military operation against Raqqa.

The Turkish side did not give a straight answer when asked whether it would support such an operation if the PYD were kept out of it. Ankara repeated that it will not allow the YPG to take over the Azaz-Jarablus line.

But it is increasingly difficult for Ankara to maintain its position on blocking an operation against Jarablus. In his recent visit to Washington, Turkish President Recep Tayyip Erdogan submitted to US President Barack Obama a plan to rid the region of IS. That plan called for clearing al-Rai and Jarablus using armed groups supported by Turkey. On April 7, with an operation that involved 10 groups, including Ahrar al-Sham, al-Rai was liberated from IS. But all of those units, supported by artillery fire from Turkey, could hold al-Rai for only four days.

They abandoned their weapons and ran away. IS not only recovered the places it had lost, it also took over four new villages.

According to reports, after the loss of al-Rai, Turkey's National Intelligence Organization met with those 10 groups for two days in the Turkish border town of Kilis. Turkish officials expressed their dismay about the rout and demanded changes in the groups' commands. Sham Brigade and Nureddin Zengi Brigade changed their officials in charge of operations. Although there are rumors of a second operation against al-Rai, the fiasco partially weakened Turkey's hand.

It is important that Votel went to Kobani despite Turkey's potentially bitter reaction. It is curious, however, that Ankara — which made such a fuss when Obama's anti-IS envoy Brett McGurk went to Kobani and Jazeera on Jan. 30-31 — was surprisingly silent over Votel's contacts with the YPG.

Of course at this point there is no room for optimism that Ankara will erase its red lines vis-a-vis the Kurds. Instead, Turkey is now trying to put together an even more formidable force with Jabhat al-Nusra, which it is trying to steer away from al-Qaeda.