First Turkey-backed operation against IS becomes a fiasco

Just days after Turkey-backed groups claimed victory against IS in Syria’s al-Rai, the area has fallen back under the extremist group’s control, supporting claims that cooperation with Kurdish forces is needed to defeat IS. 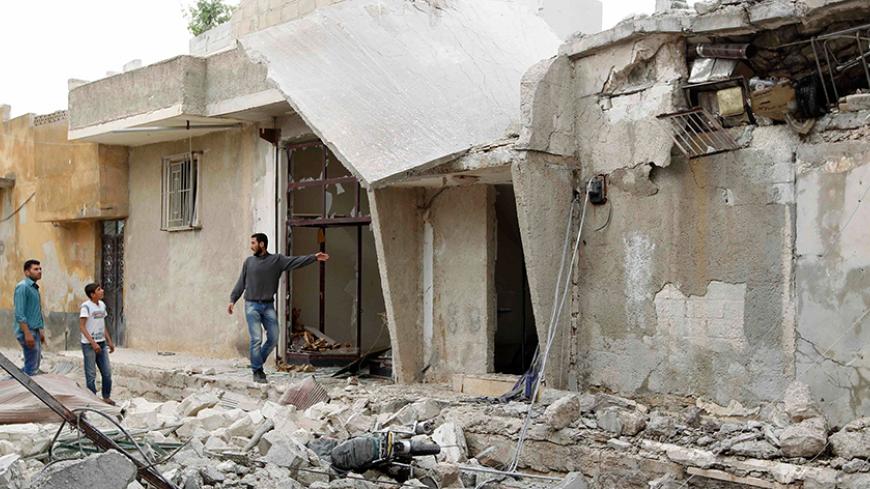 A man gestures near a damaged site in the northern corridor town of Azaz, near the Azaz-Marea line and the border with Turkey, May 6, 2014.

Turkey recently proposed that the United States abandon Syrian Kurdistan's People's Protection Units (YPG) and "let us wipe out the Islamic State [IS] jointly with the moderate opposition." Turkey then made its first such move last week at al-Rai, Syria, with a composite force of Turkmens, Free Syrian Army factions and Salafists.

That force took the town with Turkey’s support, winning much acclaim, but was trounced four days later when IS retook the city April 11.

Faced with heavy international pressure to liberate Jarablus and al-Rai from IS, Turkey had two options: allow the Syrian Democratic Forces (SDF) led by the YPG to conduct operations west of the Euphrates, or push forward to al-Rai and Jarablus with organizations linked to Turkey’s National Intelligence Service.

Because Moscow might still retaliate for Turkey's downing of a Russian jet in November, it's no longer an option for Turkey to field its own army and air force in Syria.

There were reports that, during his recent visit to Washington, Turkish President Recep Tayyip Erdogan had proposed to President Barack Obama that the United States should not cooperate with the YPG, but consider a joint operation with Turkey and Arab tribes. Media reports in Turkey said the presidents had agreed for the United States to launch an operation at Menbic with the SDF, while leaving the area to the north to the "moderate opposition."

Turkish Foreign Minister Mevlut Cavusoglu, referring to the bargaining with the United States, hinted that the Free Syrian Army (FSA) could be shifted to the areas where IS is now in control. “Special forces can guide them. With additional training, cadres could be prepared to command them. The idea is not to send our army in, but to shift the FSA from the northwest toward the IS area. Turkey will provide air and ground support from its side of the border,” he said. “We have the means to do this. This is how the area will be cleansed of IS. We didn’t discuss sending Turkish and American soldiers to Syria. We have political agreement on this.”

In line with the road map Cavusoglu spoke about, Turkey gave artillery support to the operation that began April 7, and coalition planes from Incirlik Air Base provided air support. A local source at Elbeyli, on the Turkish side of the strip of land controlled by IS, told Al-Monitor about military activities.

“For a while every evening, people were seen being transported to the border area in buses. … We also saw trucks laden with earth-moving equipment and 4x4 vehicles," the source said. "This was done at night, and because some of the trucks were covered with tarpaulins, we couldn’t see their loads. Clashes escalated Saturday night. They brought about 20 wounded to Kilis. Two of them were IS men."

Pro-government media in Turkey reported the developments as a victory of Turkmens, while organizations such as Ahrar al-Sham released their own combat photographs. This move added credibility to Ankara’s view that the area can be cleaned of IS without the Kurds.

Turkish media lauded the al-Rai victory as “a success of opposition forces toward establishment of a safe zone,” as Turkey has been advocating. After taking al-Rai, the opposition groups were expected to advance 60 kilometers (37 miles) to Jarablus, which is the most significant logistics hub on Turkey’s border.

The euphoria lasted four days — until IS returned with 11 explosive-laden vehicles and routed Turkey’s allies.

Not only was al-Rai lost again, but the Azaz-Marea corridor held by Turkey-supported groups came under threat. Turkish media, which had replayed the "safe zone" scenarios, fell mute and then began debating how Turkmen forces had to be reorganized.

Abdurrahman Mustafa, chairman of the Turkmen Assembly, replied to Al-Monitor’s question about why Turkey-backed groups could not hold on to al-Rai: “We have been fighting east of Azaz for the past two years. Daesh's [IS] defense is incredible. The area changed hands so many times. Combat conditions are different here. It is flat land with many villages. Daesh can come from any direction easily with their vehicle-borne bombs. That is why we had to retreat, but we are preparing for new actions.”

He added, “Last week we had the support of planes that took off from Incirlik. This is the first time we had coalition support. Turkey was firing artillery within their rules of engagement any time Kilis was shelled. Those were useful. Turkey’s support is within its rules of engagement." According to Mustafa, 25-30 Turkmens fighters were killed.

Another Turkmen official, who did not want to be identified, scorned the Arab allies and the coalition. “The Syrian war is one of treachery. Someone is always shooting Turkmens in the back. We lost al-Rai because of the treachery of militants who had infiltrated Arab groups. Coalition forces did not give sufficient support. As you know, until now, coalition forces have always fired on groups Turkey supports. Turkey’s response was limited by its rules of engagement,” the official said.

“The northern corridor is so confusing, we have no idea who is on whose side. There is the risk of losing the Azaz-Marea line. Actually, there is that risk all over because of rampant treachery,” the Turkmen source said, referring to mounting fears that IS — as it did last year — might not stop at al-Rai but press on to Azaz again. “Turkmens pay the heaviest price. We have lost the reins in our area. The process is manipulated by foreign powers. We are now discussing what we can do, whether we can reorganize the Turkmen forces. I don’t know how effective we can be."

As this is happening north of the Euphrates, the Menbic operation that SDF was going to carry out with the United States was delayed.

“We are not yet ready for the operation,” Zuhat Kobani, an official with the Kurdish nationalist Democratic Union Party, told Al-Monitor. Another Kurdish source said, “There are issues to be cleared up about the Menbic operation. The United States and Turkey have not yet agreed on this matter.”

Turkey’s tactical moves designed to keep the YPG away from the area are impeding a real and meaningful struggle against IS. The expectation is that if the Kurds and their Arab allies move against Menbic, Turkey will arrange for a repeat of the al-Rai offensive.

If the Syrian army succeeds in the “Great Aleppo War,” the northern front will be even more complicated, so much so that even Turkey won’t be able to cope with it. Then, the “with Kurds or without Kurds” debate will become irrelevant.