Is Turkey falling into its own Syrian trap?

Kurds may be avoiding combat with Turkey, Syria's reaction could be restrained and the Islamic State might have withdrawn without a fight, but Ankara could still get stuck in a quagmire. 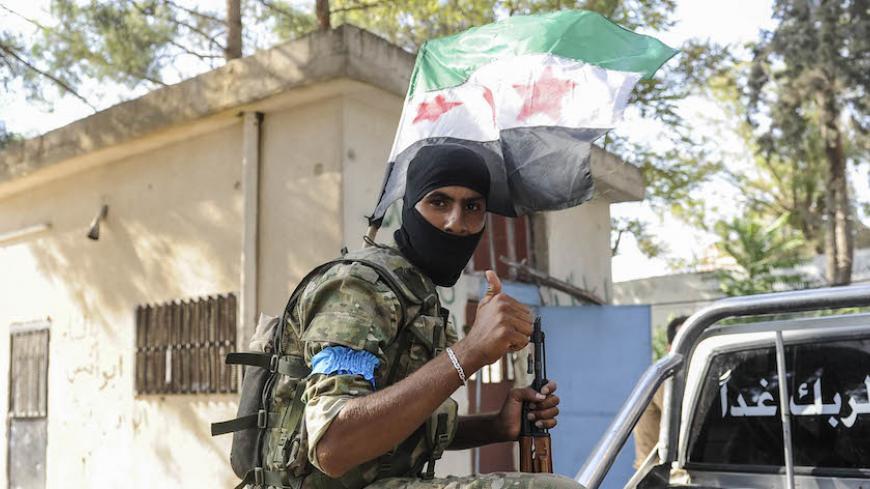 A member of the Turkish-backed Free Syrian Army (FSA) gestures as he patrols in the border town of Jarablus, Syria, Aug. 31, 2016, Syria. - Defne Karadeniz/Getty Images

The sentiment in Turkey is that, with "Operation Euphrates Shield," the country has made a thunderous return to the Middle East. But in a topography where nobody knows who is fighting who and what will tomorrow's alliances look like, there are serious traps awaiting Turkey.

During the first week of the operation, Turkey's target shifted from the Islamic State (IS) to the Kurdish-led Syrian Democratic Forces (SDF). While IS withdrew from Jarablus without fighting and still occupies scores of other places, the Turkish Armed Forces (TSK) and allied groups continued their advances toward areas the SDF had liberated from IS.

Turkish President Recep Tayyip Erdogan on Aug. 29 said the operations will continue "until the YPG [People's Protection Units] is no longer a threat."

The equation that has cropped up is that groups supported by the US Central Intelligence Agency (CIA), accompanied by Turkish tanks, are clashing with groups backed by the US military.

When the TSK and its allied groups reached the Sacu River, which constitutes a natural boundary for the Manbij region, Ankara arrived at a critical juncture. It is now time to decide if the combat will be directed against the Kurds and its SDF partners or IS, which abuts Turkey's borders. Turkey secured US support and Russian blessing by telling them that its goal was to push IS away from its borders.

To clarify the situation on the ground a bit: While Turkey is pressing on SDF targets, IS continues to control scores of villages from Jarablus to Al Rai in the west. IS also controls the area from Turkey's borders to al-Bab in the south.

If Turkey insists on clearing Manbij of Kurds, that will be a new source of tension with the United States. The first warning came from Pentagon spokesman Peter Cook, who said they were monitoring the clashes between the TSK and opposition groups and the SDF, finding them unacceptable. He said US support for the SDF, which has proven its prowess, will continue.

US Secretary of Defense Ashton Carter asked Turkey to focus on fighting IS and avoid hot clashes with the SDF. Gen. Joseph Dunford, chairman of the US Joint Chiefs of Staff, discussed the issue with his Turkish counterpart. Carter will meet with Turkish Defense Minister Fikri Isik in London on Sept. 6. Carter's statement that the YPG is withdrawing to the east of the Euphrates gives the impression that the Syrian Kurdish group is trying to avoid a direct confrontation with Turkey. YPG spokesman Redur Khalil declared after liberating Manbij that the the group had handed over all military positions to Manbij Military Council and withdrew.

This is a clever move to avoid deepening the war. But with the YPG claiming to be standing aside, now tensions are mounting between Turkey and the SDF with its local elements such as Kurds, Arabs, Turkmens and Circassians. Even though Turkey has not given up targeting the YPG in its statement, more recent threats against Ankara have been coming from the SDF. That means Turkey is turning local groups into an enemy as well.

For Turkey, which has been trying to play the Turkmen card all along, opposition from the Turkmens at Jarablus was probably the last thing that it expected. But the Seljuk Brigade made up of Turkmens went as far as accusing Turkey of being an "occupier."

The Seljuk Brigade's statement denouncing Turkey's operation came as shock. It said, "To liberate Jarablus from Daesh [IS] gangs, we set up a Jarablus Military Council made of Jarablus residents. But the Turkish intelligence bargained with Daesh to hand over Jarablus to groups that are in contact with terrorist bodies. We denounce Turkey's attacks on the Military Council and demand that Turkey withdraw from Syria. We will do everything to defeat these occupation forces."

As the United States supports the SDF, the question comes to this: How long can the US administration, which wants the YPG to move east of the Euphrates, stand and watch Pentagon-supported groups be attacked by CIA-supported groups motivated by Turkey?

Kurds may be upset with the US pressure on them to withdraw from Manbij, but they don't want to destroy their bridges to the United States while they are surrounded by enemies. Kurds are bound to come up with some pragmatic schemes to throw Turkey off balance.

But if Turkey's operations expand toward Rojava, the YPG may have to give up its four-year-long restraint and resist. Such a scenario may be the harbinger of a conflagration that will also pull in Turkey.

What if the Turkish operation halts on the edge of Manbij and turns against IS? This, too, will pose serious risks to Turkey.

Looking at the mindsets of Turkey's rulers, the operation has other objectives that are not openly mentioned:

It won't be easy for Turkey-supported armed groups to hold the de facto buffer zone. Their capabilities and capacity are limited. They can advance or hold on to a position only if there is an army like the TSK behind them.

If the buffer zone is to be secured by increasing TSK's presence on the ground, that would put Turkey in the position of occupier, ushering myriad of problems it would have to cope with both on the ground and in the international arena. The Syrian government took no time in accusing Turkey of crimes against humanity and in filing a complaint with the UN Security Council. When compared with the troubles that Turkey will have to deal with on the ground, the Syrian complaint would be but a minor headache.

Building a town for refugees without coordinating with the Syrian administration will only consolidate Turkey's occupier status. Moreover, settling refugees in a risky area is bound to provoke humanitarian and legal arguments.

Meanwhile, a corridor to Aleppo first requires securing the Azaz-Marea line and then expelling IS from al-Bab.

Extending the TSK operation 50 to 60 kilometers from the Turkish border doesn't guarantee anything. IS is not expected to abandon Dabiq and al-Bab easily (it ascribes special importance to those towns) as it did with Jarablus. Moreover, such an operation will require Turkey's partnership with major field forces such as Jabhat al-Nusra and Ahrar al-Sham, which are shunned by the CIA. And then there is the Syrian army, which is engaged in a major war in Aleppo with the support of Russia, Iran and Hezbollah. Going deeper into Syria may bring the TSK face to face with these forces. Russia is likely to make use of its deterrent powers before that point is reached.

Nobody knows what contingency scenarios Ankara has in mind. The general feeling is that the government is not acting based on well-studied strategic plans but according to its sense of opportunities and gut feelings.

The recent operation may have help the TSK repair its image damaged by the July 15 coup attempt. It may have opened it a way to return to Syria from where it was excluded after shooting down the Russian plane last fall. It may have enabled groups it supports against Syrian President Bashar al-Assad to remain at the negotiation table and give the impression that it is fighting IS. But if Ankara goes it alone, the situation may radically change as it may then have to confront not only its US ally but also Russia and Iran, which stood by Turkey after the traumatic coup.

Turkey has sent it soldiers into a war zone where no other country cares to venture. Careless and miscalculated moves by Ankara could then cause its Syrian venture to become a quagmire, dragging Turkey down.