Why the battle for al-Bab is pivotal in Syria

As groups fighting in Syria make headway against the Islamic State, each wants to be positioned to reap the spoils of war. 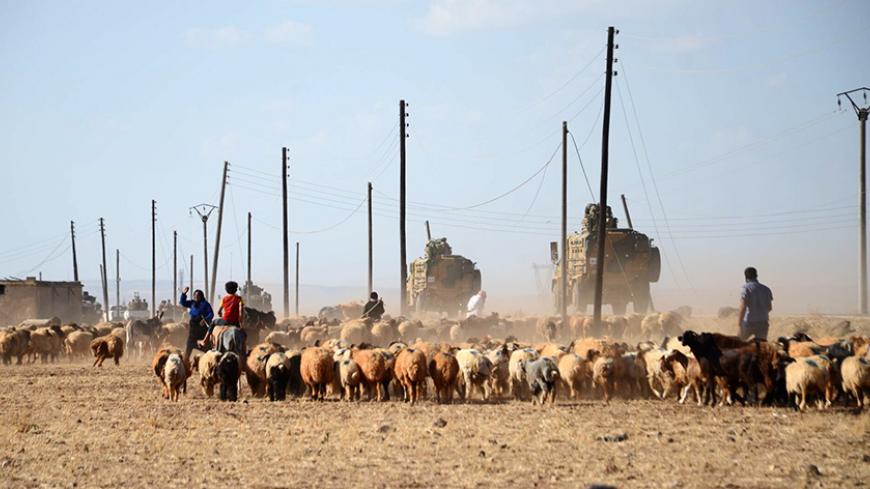 Turkish troops drive their anti-mine armored personnel carriers past shepherds on a road near the Syrian village of Tuwairan, located around 2 kilometers (a mile) outside the small border town of al-Rai, Syria, Sept. 4, 2016. - NAZEER AL-KHATIB/AFP/Getty Images

GAZIANTEP, Turkey — The crucial city of al-Bab finds itself directly in the line of fire of all the forces in Syria competing to control it. Each party is seeking to fortify its military position in the city to grab land as the Islamic State (IS) withdraws.

“Our troops will advance toward al-Bab city. This will be our next military target. We want to completely liberate this city," said Ahmed Sultan, deputy commander of the Army of Revolutionaries, an affiliate of the Kurdish-backed Syrian Democratic Forces (SDF).

"We will not allow the regime to advance, and we will also prevent the Turkey-backed Free Syrian Army [FSA] factions from taking part in the liberation of al-Bab and its countryside," he told Al-Monitor. "These factions are unable to make any progress without Turkey's support. We are able to clear the area of ​​terrorism.”

Col. Haitham al-Afisi, the commanding officer of the FSA-affiliated rebel group Brigade 51 and an officer in the Hawar Kilis operation room, sees things differently. The next phase of Operation Euphrates Shield will include "ousting IS members and the separatist SDF troops" from an area south of the border zone that FSA cleared in the first phase.

The first phase was completed Sept. 4 after Turkey-supported FSA factions took over the town of al-Ghandoura and the villages between al-Rai and Jarablus in Syria's far north. That cleared a 98-kilometer (61-mile) stretch of border from Jarablus, east of the Euphrates River, to Azaz to the west, to a depth of 10-15 kilometers (about 5-10 miles). Afisi said the next step will deepen the clear zone to 20-30 kilometers (about 12-18 miles).

Al-Bab is roughly 30 kilometers south of the border.

Afisi said, “We want to create a safe zone adjacent to the Turkish border, to lift the injustice of the Syrian people, to allow our fellow citizens and loved ones, who are refugees or displaced, whether abroad or internally, to return to their homes and country.”

That won't come easily, however. The SDF, whose military component is the Kurdish People’s Protection Units (YPG), seeks to link three northern Kurdish provinces — Jazeera, Ein al-Arab/Kobani and Afrin — to the east and west of the Euphrates River. After securing control of Manbij on Aug. 13, the SDF now needs to take over al-Bab and its countryside.

“The Turkish-backed forces are certainly heading toward Manbij because the SDF did not give up their positions, but rather reinforced them," Col. Ahmed Othman, commander of Sultan Murad Division, an FSA faction, told Al-Monitor. He said battles are currently underway in the eastern and southern sides of al-Rai toward al-Bab.

But al-Bab's value goes far beyond Turkey's goals. The city, controlled by IS since January 2014, is one of the most important IS strongholds, connecting the group's control areas in the city of Aleppo in the north to the provinces of Raqqa and Deir ez-Zor in the east. Al-Bab is a strategic link in the confrontation areas among the warring parties in Syria, and it seems to swing the balance in the ongoing battles in northern Syria.

Another party keenly interested in al-Bab is, not surprisingly, al-Bab's own military council, which the city established Aug. 15. A military commander of Jabhat al-Akrad, which is part of the council, told Al-Monitor on condition of anonymity, “The factions affiliated with al-Bab military council are composed of al-Bab citizens; most of them are Arabs and Kurds. The council also includes the Seljuq Brigade, formed of Turkmens from al-Bab and Azaz and its countryside. These factions, whose members hail from this region, have the priority to wage the battle of al-Bab.”

Of the fighting in the north and east countrysides of Aleppo and the possibility of the council facing military confrontation, the commander said, “Al-Bab military council does not want confrontation with any other faction of the FSA; but battles were waged against us and we will not stand idly by, because we are defending our land and our dignity as Syrians.”

As for the SDF​'s outlook, Farouk Haji Mustafa, the director of Bercav Center for Media and Freedom, told Al-Monitor, “The SDF only has two options. Either wage a battle for al-Raqqa — which, although useful, does not give the Kurds any historic gain, but only provides security — or wage an al-Bab battle, which is the most important in my opinion. This battle would give the Kurds a national gain by linking Kobani and Afrin through al-Bab and its countryside, which would connect together the Kurdish regions in northeast Syria.”

Mustafa concluded, “The east Euphrates area has indisputably become a Kurdish area. It seems that even Turkey is not objecting to this area, while the west Euphrates area has become a disputed area between the Turks and their supporting factions on one hand, and the Kurds and the SDF on the other hand.”