Eyes are focused on the Syrian-Turkish border after the FSA factions and Syrian Democratic Forces launched their offensives, which points at an imminent final and decisive offensive against IS. 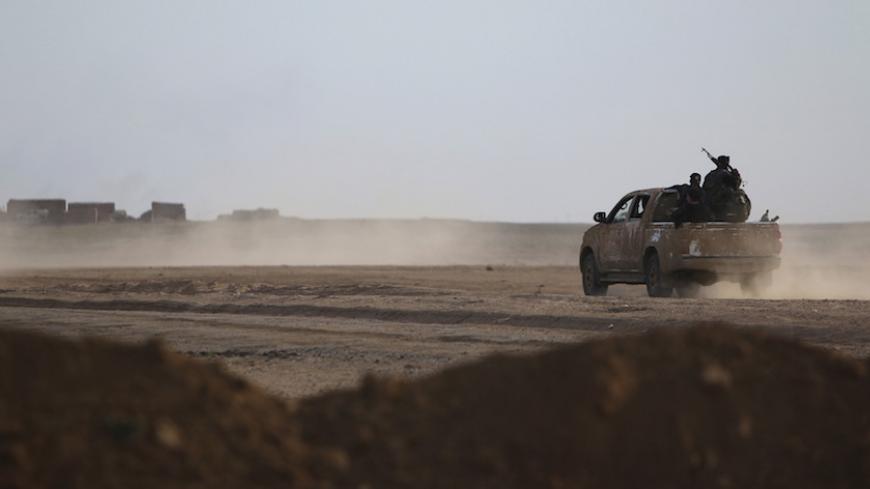 Fighters from the Democratic Forces of Syria drive to position themselves in Ghazila village after taking control of the town from Islamic State forces in the southern countryside of Hasaka, Syria, Feb. 17, 2016. - REUTERS/Rodi Said

KOBANI, Syria — On April 1, the Syrian Democratic Forces (SDF) started making military movements in northern Syria, at the Tishrin Dam west of the Euphrates, to level ground offensives against Manbij and Jarablous. This military maneuver points to an imminent large-scale offensive to expel the Islamic State (IS) from the remaining areas it controls in the eastern Aleppo countryside.

Meanwhile, factions of the Free Syrian Army (FSA) operating under the Hor Kalas operations room expanded their control in northern Syria by taking over a 10-kilometer (6-mile) borderline with Turkey. On April 8, the factions drove IS out of al-Rai and adjacent towns that have been under the group's control for 2½ years.

These movements are tightening the noose around IS, which is currently facing government forces from the south, the FSA from the west, and the Kurds — backed by the US-led coalition — from the east.

Manbij, al-Bab and Jarablous are a part of the Aleppo province in northern Syria. They are about 100 kilometers (62 miles) from the center of Aleppo, to the northeast. The cities have been controlled by IS since Jan. 23, 2014. IS seized a 55-kilometer (34-mile) border area with Turkey to the west of the Euphrates, from Jarablous to the outskirts of al-Rai, which is currently witnessing fierce battles between IS and armed opposition factions.

Speaking to Al-Monitor, Col. Mohammad Khalil, operations commander of al-Mutassim Brigade and liaison officer at the Hor Kalas operations room, said, “The FSA is locked in fierce battles near the strategic town of al-Rai." On the FSA’s next target, he said, “It is either the city of Jarablous or farther south to al-Bab."

For its part, IS-affiliated Amaq News Agency confirmed in a statement posted on its official website on April 8 that “the US and Turkey-backed opposition factions took control of the town of al-Rai."

Khalil did not rule out of the possibility of IS launching a counterattack. He said, "We have information saying that IS is mobilizing troops to level a sudden attack." He added, "Our forces are well-prepared to thwart any attack, and we are at our best military readiness."

Fawzi Suleiman, a military commander of the Kurdish People's Protection Units (YPG), one of the most prominent factions of the SDF, told Al-Monitor, "We are looking forward to linking all three Kurdish provinces," namely Afrin, Kobani and Hasakah, which are separated by IS-controlled Manbij and al-Bab cities.

Suleiman said, "The goal of the Syrian Democratic Forces is to liberate the area from terrorists.” Answering a question on the latest military movements in Aleppo’s eastern countryside, he said, "What is happening now is that the residents and civilians of those cities had repeatedly called on our forces to rid them of IS terrorists."

The ongoing advancement of the opposition and the SDF toward the Turkish border would limit IS’ presence in northern Syria, which Turkey and the US-led coalition views as a priority in the battle against IS.

Speaking to Al-Monitor, Mohammad Zahid Gul, a Turkish political writer and analyst, praised “the moderate Syrian opposition’s control over new swaths in northern Syria," considering that this advancement would bring "comfort" to Turkey. He said, "The control of any terrorist organization, including IS, over sites close to the Turkish border are of concern to Turkey. Turkey, however, will not directly intervene in the battles and will limit its intervention to the use of artillery."

On April 7, the Turkish army bombarded IS targets in northern Syria in response to a cross-border artillery attack on the Hiwar Kalas border town, which injured three civilians.

Gul confirmed that Turkey is not an involved military party in the Syrian battles, saying, "The battles on the ground are taking place on the Syrian territory, including the border areas with Turkey. All that Turkey cares about is not to have its national security put in jeopardy."

Turkey accuses the YPG of having close ties with the banned Kurdistan Workers Party (PKK). Gul said, "The Syrian Democratic Forces are managed by the Democratic Union Party [PYD] and its commander, Salih Muslim Muhammad." Turkey accuses the PYD of being a branch of the PKK.

According to Gul, "The US supports these forces, given its own interests, under the pretext of strengthening the front against IS. The forces, however, engaged in many conflicts with the moderate revolutionary factions as well."

Kurdish political writer and analyst Farouk Hajji Mustafa, director of Bercav Center for Freedoms and Media, told Al-Monitor, "IS is spending its last days in the north of Syria." He believes that this was shown through the latest US-Turkish agreement, leaked to the media on April 3. He said, “Turkey allowed the Syrian Democratic Forces to advance in northern Syria, provided that they do not advance toward Azaz, Mare and the Syrian opposition strongholds in northern Aleppo countryside."

Hajji Mustafa added, "There is a will to defeat IS by dragging it further into the center and away from the Turkish border."

"The [US-led] coalition intensified its air raids on the IS-controlled areas, which coincided with the Syrian Democratic Forces and FSA factions’ movements, which indicates that a large-scale battle to expel IS of Syria is imminent," he said.

The latest military movements by the SDF and armed Syrian opposition factions in northern Syria aim to cut off the supply route to IS, which links the eastern and northern Aleppo countryside to Raqqa, and to bottleneck IS militants by cutting off the remaining border passages with Turkey.

Analysts and experts in Syrian affairs believe it is likely for the coming days to witness heated and decisive battles between conflicting parties, changing the balance of power in favor of the forces fighting IS.