The Syrian Democratic Forces are leading the battle to liberate Manbij, close to the Turkish border, which pushed Turkey to warn the Kurds about expanding their influence in their areas of control. 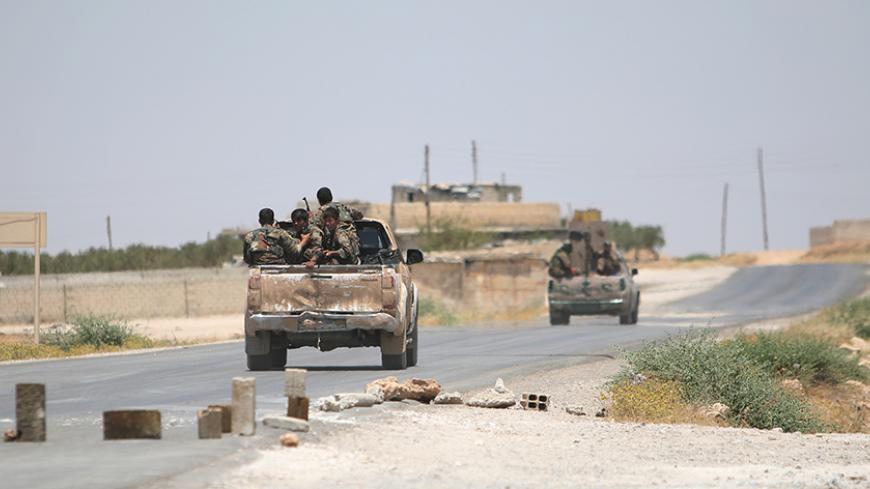 GAZIANTEP, Turkey — The battle launched May 31 to liberate the city of Manbij in northern Syria has progressed at an accelerated pace. The Kurdish People's Protection Units (YPG) led by the Syrian Democratic Forces (SDF) achieved noticeable progress against the Islamic State (IS) on the ground in the span of a few short weeks, aided by support from international coalition warplanes and the participation of US military consultants. These forces were thus able to liberate all of Manbij’s countryside, its western gate, silos, grain mills and the Assadiyeh neighborhood that is considered the gate to Manbij, barely one month after operations began.

By June 28, the SDF had gained control of one-third of the city, after the liberation of the traffic police building, southwest Manbij.

Manbij is only 40 kilometers (25 miles) from the Turkish border and 80 kilometers northeast of Aleppo. Before the latest conflict erupted, it was home to approximately 120,000 people, prior to being overrun by IS on Jan. 23, 2014. With the liberation of Manbij now, IS is losing the only strategic gateway linking its areas of control in Syria and Iraq with the Turkish border, which serves as the main route for jihadis arriving from European countries and other parts of the world. The border crossings between Syria and Turkey represent an important aspect of IS’ capability to ferry fighters, weapons and supplies from and to its areas of influence inside Syria and Iraq.

Concerning the conduct of military operations in Manbij and its environs, the official spokesman for the SDF Manbij military council, Cherfan Darwish, told Al-Monitor that SDF forces were successfully advancing toward the city and tightening the noose around IS militants inside. “Our forces have encircled the city from all sides and cut off all lines of communication and supplies. We are tightening the noose around them,” he said.

Manbij has a special strategic importance due to its being a crossroads linking four of Syria’s provinces. To the north, it is bordered by the cities and towns of Aleppo’s eastern countryside; southward, its administrative border adjoins the central Syrian provinces of Hama and Homs; and to the east, it borders Raqqa, the de facto capital of the IS caliphate.

Darwish said IS militants are employing military tactics primarily reliant on the use of tunnels, suicide bombings and explosive-laden car bomb attacks that have hindered the SDF's ability to advance more rapidly. He said, “Our troops are fortifying their attacking positions around Manbij a few hundred meters away from the city’s center, in preparation for the second phase aimed at securing the city. We expect our advance to be slow inside the city, due to the mines and booby traps planted by IS militants to impede us from taking control of Manbij.”

Manbij has an added importance to Syrian Kurds in its capacity as the first city to fall under their control recently west of the Euphrates, which opens the road toward the cities of al-Bab and Jarablus. The Kurdish control over Manbij allows, for the first time, a link to be secured between the three pockets (Afrin, Kobani and Jazeera) of Kurdish control in the east and west, thus laying the geographic foundations of a Kurdish province by controlling most of the region bordering southern Turkey.

In that regard, Aldar Khalil, an executive committee member of the Movement for a Democratic Society, told Al-Monitor that dealing a decisive blow to IS in that area would “contribute not only in destabilizing its existence in Syria but in Iraq as well, and all the areas under its control.” He added that IS militants “used Syrian lands as a strategic base and gateway for the perpetration of their crimes in the region, Europe and the world.”

Khalil was candid about the intent of the SDF to wrest control of the areas separating the northern Syrian Kurdish provinces of Afrin and Kobani from the grip of IS. He said, “Liberating the areas between Afrin and Kobani would contribute in reaching a settlement to the growing crisis in the country, while permanently drying up the sources of support enjoyed by IS, Jabhat al-Nusra and other such groups and factions associated with the two extremist organizations.”

He added that liberating those areas would contribute in strengthening relations between the different components and peoples of the region (Kurds, Arabs, Turkmens, Circassians) “to draw a road map in which would participate all those seeking to resolve the Syrian crisis. This road map will also be a prelude to ending the state of division among Syrians and a beginning of the end of the tragedy that has befallen us.”

Controlling Manbij would cross the red line repeatedly drawn by Turkish President Recep Tayyip Erdogan, as the latter had warned about crossing the west side of the Euphrates River. Turkey is suspicious of the YPG, which it accuses of having links to the Kurdistan Workers Party (PKK), which has been waging a 30-year rebellion in the Kurdish regions of southeast Turkey.

In an interview with Al-Monitor, Turkish author and analyst Mohamed Zahed Kol accused the SDF of being “a political and military movement under the control and leadership of the Salih Muslim-led Democratic Union Party [PYD].” He added, “Battles waged by these forces during the past two years fall contrary to the actions undertaken by moderate Syrian opposition forces.”

Kol indicated that from the onset of its military operations, the SDF occupied Arab and Sunni Turkmen villages in an unjustified, sectarian, ethnic and inhumane manner. He stressed that the United States backed the SDF “under the pretext of empowering the anti-IS front, though said forces also entered into numerous conflicts with moderate Syrian factions.”

Kol questioned the actions of the SDF and its lack of political or military decision-making independence, saying, “Its actions are dictated by the PYD. The SDF participates in the PYD’s terrorist activities and is a danger to the security of Syria and Turkey alike.”

Despite the fact that military confrontations are raging in most Syrian territories, the battle to liberate the city of Manbij may redraw alliances between local military forces, and between those forces and regional countries as well as the international coalition, in order to confront IS.