Who will take charge in Raqqa after it's freed from IS?

The Syrian Democratic Forces are making progress in northern Raqqa, cutting the supply lines of the Islamic State. 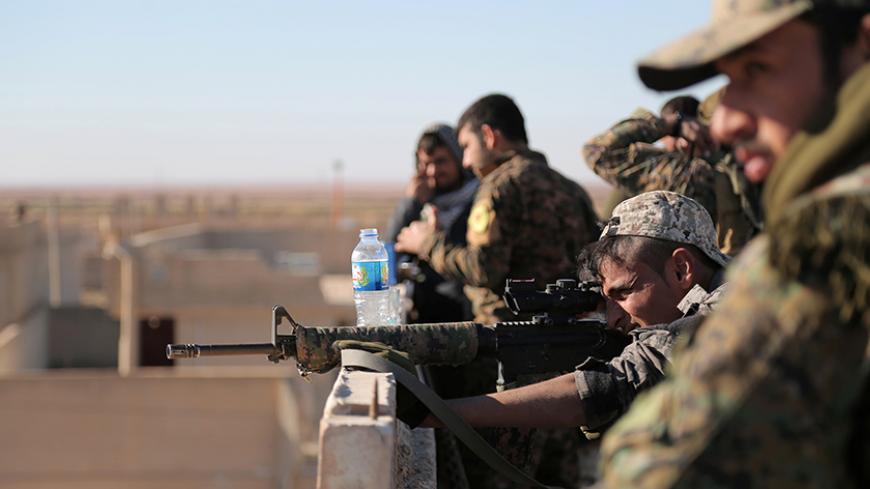 A Syrian Democratic Forces fighter looks through the scope of his weapon in Tel al-Samen, north of Raqqa, Syria, Nov. 19, 2016. - REUTERS/Rodi Said

EIN ISSA, Syria — The Syrian Democratic Forces (SDF) have expelled Islamic State (IS) fighters from an area 30 kilometers (19 miles) north of Raqqa, as violent battles are raging in the city’s northwestern countryside. On Nov. 15, the SDF announced their control over Hazima town, the largest town in the countryside of Ein Issa, as well as al-Taweelah (about 5 kilometers southeast of Ein Issa), and Tel Khaneez and Tallat Maled in Raqqa’s western countryside.

The SDF liberated al-Haisha village (in Raqqa’s northern countryside) and Khaniz al-Ghanem. It also took control of Tel al-Samen town, thus advancing toward the town’s power station, south of Ein Issa, which is only 20 kilometers from Raqqa’s city center.

On Nov. 5, the SDF launched Operation Euphrates Wrath with the participation of 30,000 militants in order to expel IS from Raqqa, its main stronghold in Syria, with the support of the US-led international coalition.

The commander in chief of Liwa Thuwar al-Raqqa, who identified himself only by the pseudonym Abu Issa, told Al-Monitor, “The Raqqa battle is important because the city is IS’ stronghold, and the world describes it as the capital of terrorism.”

He said, “The battle is pivotal for us to save the inhabitants from IS’ grip and to prove to the world that Raqqa’s residents are far from radical and are not terrorists. We are peaceful people and wish peace upon our fellows across the world.”

Raqqa is the first Syrian governorate from which the regime forces completely retreated in March 2013, but a few months later, it fell into the hands of IS. The group took full control in January 2014 following violent battles with the armed Syrian opposition factions that had tightened the noose on the city after the departure of the regime forces in March 2013.

Abu Issa noted that the Raqqa battle can be divided into two stages, “The first stage began on Nov. 5 and aims at besieging the city, isolating it and cutting off all jihadi supply lines to IS in order to prevent the entry of militants from the group’s regions of influence in al-Bab, in Aleppo’s eastern countryside.”

He said, “This would weaken IS’ morale and fighting ability and pave the way for the second decisive stage, which entails entering the city and liberating it.”

Liwa Thuwar al-Raqqa fighters are positioned in Ein Issa, 50 kilometers north of Raqqa and midway between Raqqa and Tell Abyad in the north. The SDF took control of the town a year and a half ago.

Abu Issa underlined that Liwa Thuwar al-Raqqa fighters will settle the battle, saying, “We are all Raqqa citizens and enjoy a wide public base. It is our responsibility to instill stability and security in the city, with the cooperation of its citizens.”

Since the onset of Operation Euphrates Wrath on Nov. 5, the SDF has taken control of dozens of villages and farms in Raqqa’s northern countryside that had been in IS’ grip. The forces are only 30 kilometers from Raqqa’s outskirts.

Abu Issa revealed that the SDF and Liwa Thuwar al-Raqqa concluded an agreement to hand over Raqqa’s administration to its citizens and to restrict the militants’ role to “overseeing the city’s security until a civil council, a police force, judiciary and a military force are formed to protect and govern it.”

He said that Liwa Thuwar al-Raqqa is a key component of the SDF and is considered their main Arab faction, noting, “We are the only military unit formed of Raqqa’s citizens and rebels. We have a historical relationship with the Kurdish units, and we fought IS in Kobani in the summer of 2014 and in the Tell Abyad battle in the summer of 2015.”

The YPG and YPJ played a major role in the past two years as part of the US-backed SDF when they took control of large stretches of land that were under IS control. They expelled IS from Kobani in early 2015, and took hold of Tell Abyad in Raqqa province in June 2015 and al-Shaddadi in Hasakah province at the end of February. The YPG announced Nov. 16 in an official statement that they will “withdraw their forces from Manbij in Syria to the northern side of the Euphrates River to participate in the liberation of Raqqa.”

In response to a question about the YPG’s possible participation in the Raqqa battle, YPG spokesman Ridor Khalil told Al-Monitor, “Raqqa is a Syrian city, and it is only normal for us to participate in liberating it from IS’ terrorist grip.”

For his part, Turkish President Recep Tayyip Erdogan told the press Nov. 16 that he was sure “the YPG would retreat to the east of the Euphrates from Manbij on Wednesday or Thursday, which Turkey has been demanding for a while.” Turkey refuses the participation of the Kurdish units’ militants in the liberation of Raqqa that is inhabited by an Arab majority.

Turkish analyst and writer Mohamed Zahed Kol told Al-Monitor that the Turkish government took precautionary measures along the southern borders with Syria “because the northern Syrian borders have become hubs for terrorist parties and organizations attacking Turkish cities and lands from Syria and smuggling weapons to terrorist groups in Turkey also.”

He noted that the Turkish government launched Operation Euphrates Shield in northern Syria in August and said, “The operation aimed at supporting the Free Syrian Army in defending its lands and cities from the racist attacks of Kurdish militias fighting with US and Iran’s support in northern Syria.”

Although the Kurdish forces’ participation in the mostly Arab Raqqa battle raised the ire of Turkey and the Syrian opposition, the United States and the international coalition settled the battle by relying on the SDF and Arab factions as ground troops in the Raqqa battle.