US backing ensures Arab-Kurd alliance in Syria will survive

Liwa al-Tahrir walking out of its alliance with the Kurdish People's Protection Units caused plenty of excitement in Turkey, but did it really change anything in Syria? 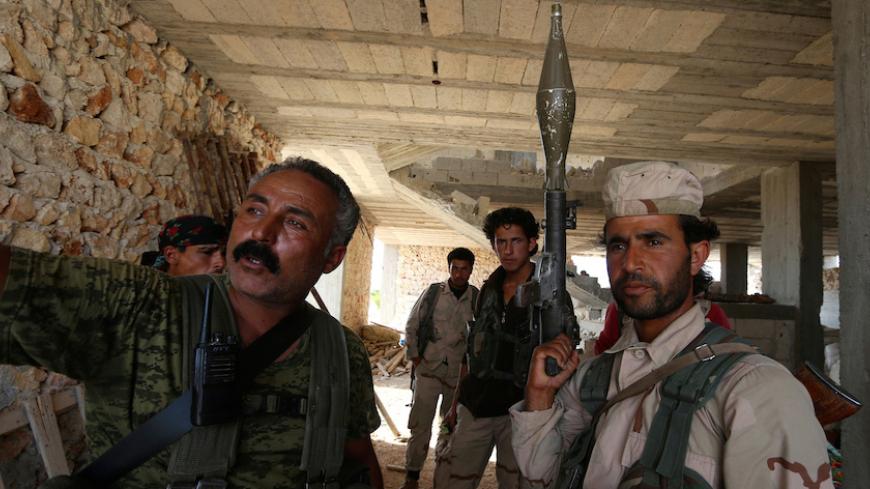 Fighters of the Syria Democratic Forces stand inside a building near Manbij, in Aleppo province, Syria, June 17, 2016. - REUTERS/Rodi Said

The Turkish Armed Forces (TSK), which has expanded its operation in northern Syria by sending tanks to al-Rai, needs a win. Just as important, the Turkish government needs a story about how the balances have shifted since the TSK’s intervention and how the Syrian Democratic Forces (SDF) led by the Kurds are about to disintegrate.

Liwa al-Tahrir (Freedom Brigade) recently split from the SDF and sought refuge with Turkey, where the pro-government media treated the news with their trademark sensationalism: “There is now a growing crisis between Arab elements and the PKK [Kurdistan Workers Party] in the SDF. One hundred Liwa al-Tahrir fighters have fled from the PKK’s pressure to fight Turkey. They surrendered to the TSK at the border.”

But that is not how the episode was reported by the Arab media. Abu Mohamed Kafr Zita (Abdulkarim al-Obedi), the commander of Liwa al-Tahrir, accused the Kurdish People's Protection Units (YPG) of excluding other groups from SDF decision-making, saying, “The SDF has to be for all Syrians, but we see that the YPG doesn’t agree. We fought together with the YPG for three years. Now they want to terminate us.”

Kafr Zita said the YPG pressure is not confined to his group: “They stopped delivery of food and water to all groups [including] Liwa al-Sana, Liwa Thuwar al-Raqqa and Liwa al-Tahrir.”

Kafr Zita then issued an ultimatum for the SDF to reorganize under US supervision within 48 hours, or his group would split from the SDF. Hearing this, the YPG surrounded Liwa al-Tahrir positions around the village of Quneitra with the intention of detaining Kafr Zita. In the ensuing clashes, three Liwa al-Tahrir and six YPG fighters were killed. Abu Ali, a Liwa al-Tahrir commander, said the clashes broke out because Liwa al-Tahrir refused to fight against the Free Syrian Army (FSA) at Manbij.

Another report said Liwa Ahrar al-Raqqa, in retaliation for the YPG attacks, expelled the Kurdish units from five villages around Ain Isa. Kafr Zita then moved to Turkey with his men via Tell Abyad and went on to Jarablus to participate in Operation Euphrates Shield.

But Liwa Ahrar al-Raqqa's commander denied the reports that his group had broken off from the SDF after fighting with the YPG and accused Kafr Zita of spreading false news. “He sold his conscience to the occupier Turkish state,” the commander said.

There have been many shifting alliances, splintering, new groups emerging and old ones disappearing. But none of this is surprising, since the Turkish army upset the latest balance. One has to remember it is not only ideology that makes a group attractive, but also its weapons and finances.

So what made the YPG-led SDF such an attractive option for some groups on the ground?

Only the invalidation of one or more of these factors could trigger the SDF's disintegration. But the determinant factor is US support. The United States has given Turkey a green light to set up an IS-free safe zone of 10-15 kilometers (6-9 miles) in northern Syria, on the condition that there be no clashes with the SDF. Some have questioned whether US support for the SDF will continue, given the US effort to maintain a balance between Turkey's ruling Justice and Development Party (AKP) and the Kurds. But US civilian and military officials have found the SDF to be the most effective force against IS — so the support will continue. And as long as the US support continues, it will not be easy to bid farewell to the SDF, even if some minor groups go along with Turkish schemes.

If Turkey expands the operation to al-Bab and creates a safe corridor between Aleppo and Kilis in Turkey, some field elements may turn their backs on the Kurds, declaring that the real fight is against Syrian President Bashar al-Assad.

There are, however, several potential spoilers along the way. For example, Tel Firat — smack in the middle of the corridor envisioned by Turkey — lies in the hands of the SDF, not IS. A major SDF component, Jaysh al-Thuwar, is the barrier there. Sources speaking to Al-Monitor said it is not likely that Jaysh al-Thuwar will leave there and rejoin the FSA.

Then what is the real story of Liwa al-Tahrir splintering from the SDF? Is Liwa al-Tahrir a major, indispensable force whose departure will decimate the SDF?

Sources from Rojava told Al-Monitor that the YPG-led alliance is still robust. Eldar Halil, an official of the Rojava Movement for a Democratic Society also known as TEV-DEM, which forms the infrastructure of autonomy in Rojava, said, “Turkey’s occupation of Syria will not affect our alliance. We are defending our land in our country. We are not the occupier. Syrians will not prefer an occupier to its own fighters defending their homes.

"In Manbij, after expelling IS, we left the running of the town to local people. If needed, we will go back. I am not saying that there will not be any group leaving the SDF. That is possible, but not important. Ties [to the] group that left were already problematic. The man in charge was acting like a Turkish agent. Not more than 20 people left with him."

Another source close to the YPG said, “[Liwa al-Tahrir] said they went to Turkey after clashing with the YPG. There was no actual clash, but an atmosphere of a clash. They took refuge with the Turkish army by making a fuss of fighting the YPG. Now they themselves are divided. Some did not want to leave the SDF, and have come back.”

Liwa al-Tahrir, which arrived at Serekaniye three years ago and made an alliance with the YPG, took part in the operation to liberate Tell Abyad from IS in June 2015. Some sources say Liwa al-Tahrir did not approve leaving the control of Tell Abyad to a civilian assembly and wanted the militias to remain in charge. These military councils set up in areas controlled by the FSA had eventually become instruments of armed groups to rule the areas and produce warlords. This wasn’t allowed at Rojava.

Moreover, the professional army structure of the YPG was not to the liking of Liwa al-Tahrir.

Zuhat Kobani, a representative in Europe of the US-supported, Kurdish nationalist Democratic Union Party, said the Liwa al-Tahrir split was engineered by Turkish intelligence. “I think they were bought off. It is not important for us. In the environment of war, such comings and goings happen," Kobani said. "This is not the first time. Those who took part in the Jarablus operation are the ones under the influence or guidance of the Turkish intelligence. If they move toward al-Bab, it will not be easy for them to get the support of local elements.”

If one motivation for joining the SDF was to fight IS, the other motivation was the clash with the FSA. If one day the local elements have to make a critical choice, they might opt for the Syrian army. If one day tribes of Syria’s east and northeast and the Syriac Military Council established by Christians have to search for an alliance outside of the Kurds, they will not choose Turkey. These tribes historically had good relations with the Syrian state. Jabhat al-Akrad (Kurdish Front), which used to cooperate with Turkey-supported groups, proved by leaving the FSA that it will not be acting against the Kurds. When Liwa Thuwar al-Raqqa, made up of Arabs, was expelled from Raqqa by Jabhat Fatah al-Sham (formerly Jabhat al-Nusra), which was supported by Turkey, it joined the YPG. It stays away from Turkey.

The key factor that brought Arabs and Kurds together was the IS threat, and now they are holding Turkey responsible for the strengthening of IS, al-Qaeda and Salafi jihadis. It may even be difficult to persuade Turkmens to leave the SDF. SDF spokesman and former commander of the Seljuk Turkmen Brigade Talal Selo said, “Turkey supported the Sultan Murad Brigade, which is linked to al-Qaeda, and left us alone when [IS] attacked.”

To sum up, Turkey might recruit even more groups on the way to Aleppo. But that still wouldn't signal the end of the SDF. The US intervention that stopped Turkey-backed groups from crossing the Sajur River and advancing toward Manbij is the vital element that assures the SDF's continuing existence. Even if that US support wanes, do not predict the imminent end of the SDF, regardless of what the pro-government media say.