The establishment of a safe zone on the Turkish-Syrian border is likely to further deepen the divide between the Arabs and Kurds in the area. 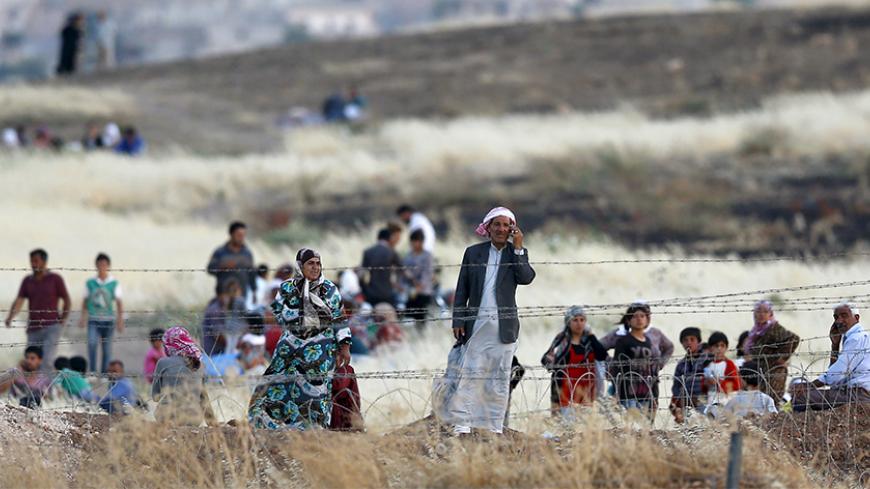 Syrian Kurds from Kobani wait behind the border fences to cross into Turkey as they are pictured from the Turkish border town of Suruc in Sanliurfa province, Turkey, June 25, 2015. - REUTERS/Murad Sezer

The Syrian Kurds, one of the most effective fighting forces against the Islamic State (IS), established the Euphrates Volcano joint operations room (Burkan al-Furat) with various small Arab factions in September 2014, in spite of distrust between the ethnic groups. Now, the establishment of a new buffer zone in Syria extending from the town of Aazaz to Jarablus might add greater pressure on already tense relations between the Kurdish and Arab factions.

On July 27, US and Turkish officials announced a deal to fight IS by allowing the creation of an IS-free zone in Syria and allowing US planes to use the Incirlik Air Base in Turkey. On Aug. 12, US warplanes carried out their first airstrikes on IS targets in Syria after taking off from Turkish soil, in a new phase in the anti-IS campaign.

The safe zone would be about 100 kilometers (62 miles) long and 40 kilometers (25 miles) wide, and it is assumed that full protection will be guaranteed in these areas from any possible attack by the Syrian regime or IS. The United States has nonetheless insisted the plan’s main goal was to clear out IS militants from the border region.

While the safe zone has been primarily created to prevent IS’ hold on these territories, Turkey’s ulterior motivations seem to lie elsewhere, with recent attacks targeting the Kurdistan Workers Party (PKK) — which Turkey considers as a terrorist organization directly connected to Syria’s Kurdish Democratic Union Party (PYD).

Idriss Nasan, vice minister of foreign affairs in Kobani, told Al-Monitor, “There have been several attacks targeting YPG [People's Protection Units] positions on July 24 and July 26, namely in the Zor Maghar village west of Kobani in Syria, wounding four rebels and a number of civilians."

According to Nasan, Syrian Kurds argue that most of Turkey’s operations appear to be aimed at their positions in northern Iraq or southeast Turkey, and now in northern Syria, instead of IS strongholds.

“Turkey wants to prevent Kurdish expansion to the west of Syria,” said Sinan Hatahet, an expert on Syria who works for Istanbul-based think tank Omran Dirasat.

Kurds captured in June the town of Tell Abyad on the Turkish border that allowed them to link the Jazeera and Kobani regions for the first time. Jazeera, which broadly corresponds to the Syrian province of Hasakah, is the richest and largest of the three Kurdish cantons (Kobani, Hasakah and Afrin, also known as Rojava).

In an interview published by Reuters July 28, Akram Hasso, the prime minister of the Kurdish administration in Syria, said, “The democratic self-administration … has proven its effectiveness and its representation of the people of Rojava.”

While Turkey’s safe zone basically hinders Kurdish ambitions to establish an autonomous state in northern Syria, it also underlines divisions between the Arabs and Kurds, who interpret the plan differently.

Rached Satouf, from Liwa Thuwar al-Raqqa (Raqqa Revolutionaries Brigades), told Al-Monitor, “The creation of a safe zone is definitely to the advantage of the Syrian people." According to Satouf, Liwa Thuwar al-Raqqa falls under the banner of the Euphrates Volcano joint operations room, which is comprised of Syrian Kurds as well as other brigades such as the Northern Storm Brigade, the Free Syrian Army (FSA) from Hasakah and Deir ez-Zor, Ahrar Manbij and Jarablus and the People's Protection Units (YPG).

Nasan said, “Turkey is looking to defend its interest in Syria where it has exacerbated the crisis. It was looking to stop the advance of joint Kurdish-Arab forces, while favoring Turkmen brigades in the area.”

Both Satouf and Nasan believe the safe zone will exclude brigades affiliated with the Euphrates Volcano joint operations room. In an interview Aug. 18 with Ara news, Ahmed Touma, the president of the interim government that was formed by the Syrian National Coalition to lead the transitional phase in Syria, confirmed there was no place for the PYD in the liberated region.

Both the United States and Turkey have said they are willing to assist moderate Syrian rebel groups to deploy in the buffer area. However, the two countries have diverging interpretations of which groups meet that standard. According to sources from Gaziantep who spoke to Al-Monitor on condition of anonymity, Washington supports secular rebel groups such as the FSA, while Ankara, along with Saudi Arabia, is reported to have provided support to Sunni fundamentalist groups opposing Syrian President Bashar al-Assad, such as Ahrar al-Sham that has demonstrated an understanding of local dynamics and resilience in Syria.

This plan will certainly aggravate relations between the Arabs and Kurds in PYD-dominated areas, Hatahet said, with suspicion running on both sides of the divide. In a previous interview with Al-Monitor, a fighter from Nur al-Din al-Zanki who spoke on condition of anonymity said, “Arabs needed to show force in capturing areas from IS, as Kurdish advance in the region stretching between Tell Abyad and Aleppo would mean a total exclusion of Arab brigades as political players.”

For his part, Satouf said, “Kurds also view Arabs with suspicion." He added, “It is true that in areas liberated by Kurdish forces, Arab players who are not completely in line with Kurdish factions are excluded from the political equation."

Several reports have pointed to mounting tensions between the two groups with Kurds operating demographic changes in areas under their control. Pro-opposition website alsouria.net reported Aug. 3 that more than 5,000 people were forced by Syrian Kurds to leave the town of Sirin, in the northern Aleppo region. On Aug. 14, the news site also reported that roughly 186 people, mostly Arabs, had been arrested by Kurdish forces in Tell Abyad.

On Aug. 6, Syria expert Aron Lund tweeted that Majlis Shura Ahl al-Ilm had issued a fatwa allowing Syrian factions to fight both IS and the PKK. “Tensions between Kurds are not necessarily ethnic,” Satouf said, adding, “They are often linked to political affiliation and rivalry.”

On one hand, the PKK and PYD are on good terms with Assad’s regime, which the Arab brigades are staunchly opposed to. On the other hand, in some areas such as Tell Abyad, a number of Arab residents cooperated with IS, which has triggered the resentment of Kurds.

Nasan said, “We are only taking active measures against people who collaborated with the terrorist organization, but in no way against other Arab civilians. On the contrary, early this month, we created a civil administration in Tell Abyad that included all the area’s main ethnic groups, such as Turkmens, Kurds and Arabs, depending on their demographic weight in the region.”

For Satouf, most human rights infringements that took place in Syrian areas under Kurdish control were either the result of battles or individual incidents. “It is a war zone, which means there are some excesses, but I do not think these are the result of a planned policy on the Kurdish side,” he said.

The creation of a safe zone will further deepen the divide in Syria between the various ethnic groups, with Kurdish areas on one side and Arabs on the other. “But still there is a long way to go as there are logistical preparations underway, including further training and arming of brigades responsible for taking over the buffer zone, with a possible greater involvement of Turkish troops on the ground,” Satouf concluded.