What is Turkey up to in northern Syria?

As Turkey advances in northern Syria as part of its Euphrates Shield offensive, taking control of al-Bab and Manbij would give Ankara access to the Aleppo front. 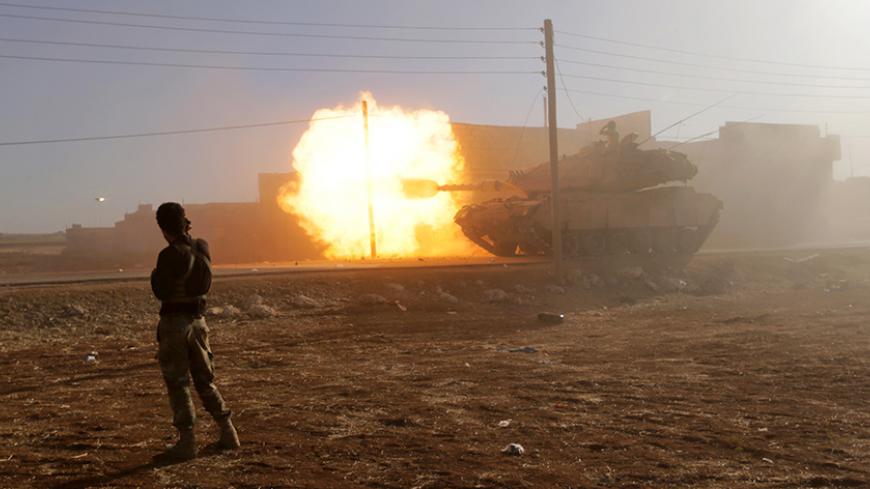 A rebel fighter stands near a Turkish tank as it fires toward Guzhe village, northern Aleppo countryside, Syria, Oct. 17, 2016.

The Oct. 25 bombing by President Bashar al-Assad’s forces supporting the Kurdish-led Syrian Democratic Forces (SDF) against the Turkish-backed Free Syrian Army (FSA), which is leading Operation Euphrates Shield, is symptomatic of the struggle currently taking place in northern Syria on the al-Bab/Manbij axis. It also underlines the geopolitical conflict pitting regional powers in Syria as well as Iraq.

Launched Aug. 24, the Euphrates Shield offensive gives Turkey direct control on the course of events in northern Syria. “The Euphrates Shield consists of a coalition of Arab rebels that conquered Jarablus and other border areas with help of the Turkish army, progressing south,” according to an Oct. 5 piece by Syria expert Fabrice Balanche for The Washington Institute for Near East Policy.

In an interview with Al-Monitor, Sinan Hatahet, a researcher from the Turkey-based think tank Omran Dirasat, estimated the coalition’s forces to be over 2,500 fighters, which include the Turkmen unit (the Sultan Murad brigade) and a coalition of Arab fighters. The Euphrates Shield forces now control an area of roughly 1,270 square kilometers (490 square miles) in northern Syria.

The Turkey-backed August offensive was recently extended to the Syrian town of al-Bab, according to Turkish President Recep Tayyip Erdogan, who said Oct. 22 that these forces will press on the Syrian town.

On Oct. 26, Erdogan clearly stated as well that Turkey was determined to clear the Kurdistan Workers Party’s (PKK) Syrian offshoot, the People's Protection Units (YPG), from the northern Syrian town of Manbij after clearing the Islamic State (IS) from al-Bab. This would allow the creation of a “terror-free zone” comprising the towns of al-Bab, al-Rai, Azaz, Jarablus and Manbij.

Control over the areas of al-Bab and Manbij would allow Turkey to achieve several goals, namely hinder the Kurdish expansion, position itself on the Aleppo front line and have a say in the next Raqqa battle. Yet Turkey’s ambitions appear to be met by fierce opposition from Kurdish and Assad’s forces.

The town of al-Bab is of instrumental importance for the various factions positioned in the area. It is, after all, the last major IS-held town west of its capital in Raqqa. According to Balanche, on Oct. 3 the Kurdish-dominated SDF took Arima, an IS stronghold on the road from Manbij only 20 kilometers (12 miles) east of al-Bab, while the Syrian army is only 10 kilometers south.

The city of al-Bab, controlled by IS since January 2014, represents a strategic connecting point between northern Syria, Aleppo and Raqqa, and constitutes as well a red line for the various factions.

First, the advance of Operation Euphrates Shield on al-Bab would hinder Kurdish ambitions. In a Sept. 15 article published in Al-Monitor, Farouk Haji Mustafa, the director of the Bercav Center for Media and Freedom, said that the al-Bab battle would give the Kurds a “national gain by linking Kobani and Afrin through al-Bab and its countryside, which would connect together the Kurdish regions in northeast Syria.”

Second, seizing al-Bab and then Manbij would position Turkey in control of the rural Aleppo area and fulfill two objectives: establish a de facto no-fly zone and give it access to the Aleppo front line. In September, Erdogan proposed to the United States and Russia setting up a no-fly zone in northern Syria, after Ankara-backed fighters pushed IS from the border area. Erdogan had previously claimed at the UN General Assembly that the group would seize around 5,000 square kilometers of territory in total.

In addition, Soner Cagaptay, a researcher at The Washington Institute for Near East Policy, believes the Turkish incursion would allow Ankara to create a mini homeland for Turkey-backed rebels inside northwest Syria, one that could be used against the Assad regime. This would thus allow Ankara to keep a direct influence on Aleppo, Syria’s largest city, now in the throes of violent battles between the regime and the Syrian opposition.

“If the FSA factions backed by Turkey were to take al-Bab and Manbij, they would not only pose a threat to Aleppo but could also use it as an opportunity to advance toward Raqqa, going as far as to the Iraqi borders,” Col. Hassan Hamadeh of the FSA told Al-Monitor.

Turkey declared at the end of October that it wanted to play a leading role in Raqqa. Erdogan told US President Barack Obama to exclude the Democratic Union Party (PYD) from the upcoming Raqqa operation. “If Erdogan decides to go to Raqqa, it will be to cut the Kurdish territory from Tell Abyad to Raqqa,” Balanche told Al-Monitor.

It will be nonetheless interesting to see if Russia would block the Turkish-backed forces’ advance in northern Syria or give the US-armed SDF the air support they need to advance on al-Bab. Russia and the Assad regime would not see kindly the achievements of the FSA in the war on terror, which would elevate its status in Washington’s eyes.

Beyond its Syrian dimension, the conflict surrounding northern Syria reflects dynamics taking place across the border in neighboring Iraq. The war on Mosul has brought to the forefront the struggle between Turkey on one side and Iraq and Iran on the other over the Turkmen majority area of Tal Afar; control over Tal Afar could allow a relatively direct connection through Iraq between Iran and Syria and into Lebanon.

For Balanche, Tal Afar is Shiite, which is why Iraqi forces want to take it over, as it would provide a Shiite bastion in northern Iraq. “It would establish a Shiite cordon from Sinjar to Samarra so that it would cut Mosul from the rest of Sunni territory, namely Anbar in Iraq and eastern [Syria]. But I am still not sure of the Shiite highway from Iran to Beirut via Tal Afar,” Balanche told Al-Monitor.

Turkey’s ambitions in northern Syria could block these connecting lines between Iran’s friendly held territories and thus constitute a new red line to be treaded carefully.