Will Turkey attack Kurds in Manbij or move on to Raqqa?

Now that the Syrian army has blocked the road from al-Bab to Raqqa, Turkey may instead assault Manbij, which won’t be easy. 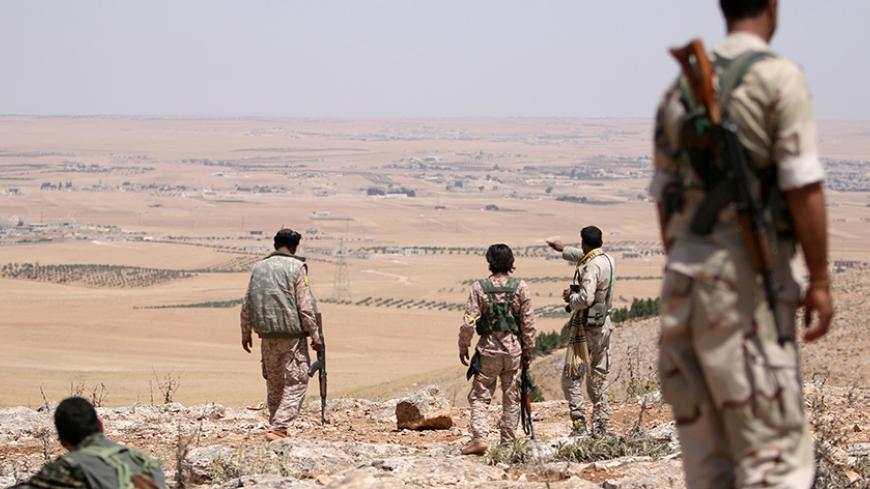 As US President Donald Trump is deciding who he wants to be involved alongside the United States in the operation to take Raqqa, Syria, from the Islamic State (IS), all the players on the Syrian stage are struggling to grab the most advantageous position. Meanwhile, the Kurdish-led Syrian Democratic Forces (SDF), which is benefiting from a perceptible increase in US military support, is advancing to the north and northeast of Raqqa.

The Turkish Armed Forces (TSK), supported by Turkmen and Islamist militias it has recruited, finally entered al-Bab on Feb. 23 when IS appeared to have withdrawn. The Syrian army, in a move that eliminated Turkey’s intended route to Raqqa, blocked the corridor between Manbij — where the Kurdish People's Protection Units (YPG) support the local military council — and the area controlled by the Syrian army northeast of Aleppo.

When Turkish officials were pointing to Raqqa as their next objective, the Syrian army had not yet severed the road connection between al-Bab and Raqqa. The closure of that route left Turkey with three alternatives to reach Raqqa: Manbij, Kobani and Tell Abyad. But the Kurds and their allies control all of these locations. If Turkey insists on hitting Raqqa first, it will have to fight the Kurds and their allies.

From the outset, Ankara has said that the objective of Operation Euphrates Shield, in addition to combating IS, is also to prevent a land connection between the Kurdish cantons of Kobani and Afrin.

In yet another turnabout, Turkish President Recep Tayyip Erdogan announced Feb. 28 that Turkey and the anti-Syrian-regime Free Syrian Army will move on Manbij next. Erdogan also repeated his demand that the YPG move back to east of the Euphrates — but the next day, the chief commander in Iraq for the United States said some Kurds definitely will be involved in liberating Raqqa.

As for Manbij, the surrounding terrain has many deterrent factors. Also, the YPG and the local military council are not the only ones who would see Turkey’s interference as “occupation action.” There is a diverse collection of local militias who will confront Turkey. Of course it is not possible to predict how far these local forces can get against Turkey unless the Kurds are involved on their side.

“There is determination to resist Turkey. Naturally, the situation may change if Turkey uses heavy weapons. But such a scenario means heavy losses for both sides,” a Kurdish source in Manbij told Al-Monitor.

The force to watch out for is the alliance the Kurds have formed with the United States. A senior YPG official who spoke to Al-Monitor on condition of anonymity said the YPG and its allies are ready to meet an offensive against Manbij. But the Kurds don’t necessarily believe Turkey will target Manbij next, since Turkey ostensibly is in Syria primarily to fight IS, not battle the Kurds.

This is how the Kurds assess the situation, according to this well-placed source: “The Syrian army, by severing the corridor to al-Bab, put an end to Turkish aspirations of going to Raqqa next. In the international arena, what is legitimate is the fight against IS.” As IS is no longer in the Turks' area of operations, does Turkey even have a legitimate reason to remain in Syria?

Despite Turkish leaders' efforts to brand the YPG as a terror organization, no international players have accepted Turkey’s designation of another target in addition to IS. If Ankara now targets the Kurds, it will face an abundance of problems with international forces. But, naturally, Turkey will not leave just because international players are asking it to get out.

According to the YPG source, from this point on Turkey will be busy — not with the Kurds, but dealing with the issues of staying in Syria. The source said:

After Operation Euphrates Shield liberated Jarablus from IS and the TSK turned toward Manbij, there were clashes between the Turkish side and the SDF, but the United States intervened to declare Sacur River as a line of separation between the two sides while the US flag was flown in the area for a while. When the Turkish side fired occasional rounds into Tell Abyad, US flags were hoisted above the YPG posts. These flags were signals that the United States would not allow an operation in the areas where it was working with the Kurds.

A critical signal about Manbij came on Feb. 24. US Central Command chief Gen. Joseph Votel and commander of the US forces in Iraq and Syria Lt. Gen. Stephen Townsend visited the training base at Kobani. The YPG official said the United States had also set up a training base at Manbij and assigned 60 US personnel there.

In addition to four US bases in Rojava — which is now known as the Democratic Federal System of Northern Syria — the CIA runs a camp at Derik.

Another question now is, if the United States were to back out of Manbij as an incentive to get Turkey to join the operation against IS in Raqqa, would the Kurds then cooperate with the Syrian army?

“At the moment we are working with the Americans," the YPG official said. "There can be no partnership with the Syrian army as long as the situation doesn’t change.”

But the same YPG official did not deny that the Syrian army, with its actions south of al-Bab, facilitated the Kurds' task.

“Turkey carried out that operation to prevent a Kurdish corridor between Kobani and Afrin, but with the Syrian army's advance to the [Kurdish] SDF lines, the situation has changed. The corridor is now a 50% reality, not from the north, but from south of al-Bab. At least civilians and traders will be able to move along it and the distance between Kobani and Afrin will be down to two hours,” he added.

Turkey sought a partnership with the United States after first agreeing to align with the Russia-Iran axis during talks in Astana, Kazakhstan. But now it is Russia that will open the way for, or block, Turkey’s move in the field. That hard reality makes the Moscow meeting Erdogan has scheduled for March 9-10 with Putin critical.

In other words, the direction of Operation Euphrates Shield from now on depends both on Trump’s Raqqa plan and the outcome of the Moscow meeting.