As Turkey closes the chapter on Operation Euphrates Shield, its military intervention in northern Syria, it's important to look at what it did and did not accomplish. 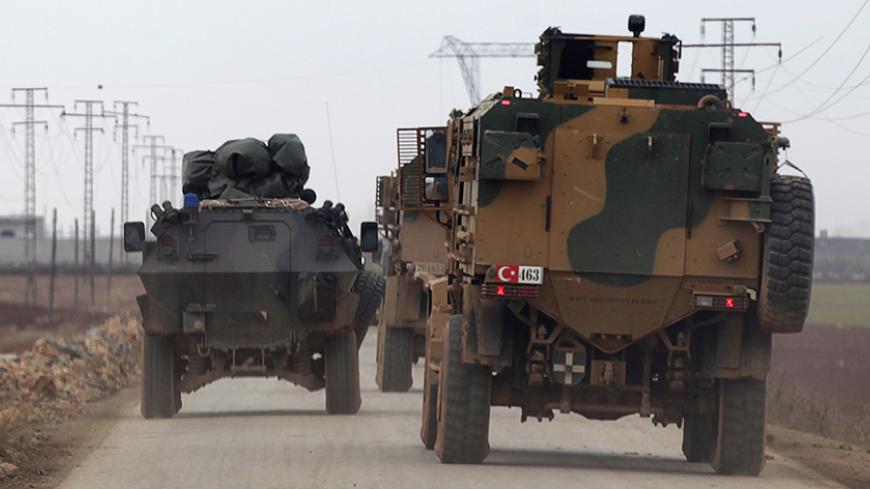 A day before the long-awaited March 30 visit of new US Secretary of State Rex Tillerson to Ankara, Turkish Prime Minister Binali Yildirim dramatically announced that Operation Euphrates Shield, Turkey's military intervention in northern Syria, had “successfully” come to a close. A precursory postmortem of the vaunted military campaign raises a number of questions, including what caused its termination and why it was not reported immediately? The answers lead one to wonder what comes next.

Foreign Minister Mevlut Cavusoglu had said after al-Bab's capture in late February from the Islamic State (IS) that the operation would continue on to its next target, Manbij, and after that to Raqqa. Not only Cavusoglu, but the ultimate decision-maker on Turkey's Syria policy, President Recep Tayyip Erdogan, also repeatedly stated Turkey’s intention of removing the Kurdish Syrian Democratic Forces (SDF) and People’s Protection Units (YPG) from Manbij and replacing the SDF as Washington's main ally in the campaign to capture Raqqa.

Those objectives have not been achieved. One might therefore logically conclude that Operation Euphrates Shield ended rather unsuccessfully. Of additional note, it took the Turkish military and its Free Syrian Army allies more than three months and a relatively high number of casualties to capture al-Bab, the southernmost point of Syrian territory that Turkey controls, some 18 miles south of the Turkish border.

The big question is why did it take Ankara a month after al-Bab's capture to declare the “successful” end of Operation Euphrates Shield? The answer is because capturing al-Bab was not Turkey's real or ultimate aim. The actual goal was to push the Kurdish military presence west of the Euphrates and end US military cooperation with the Kurds.

As March progressed, however, it became clear that that wasn't going to happen. The Americans moved their special operations forces from south of the Sajuk River to north of Manbij to deter their NATO ally, Turkey, from taking military action against the SDF, which the United States considers its main ally in confronting IS west and east of the Euphrates.

Even more bewildering to Ankara, Russia provided the Kurds a protective umbrella in Afrin, the northwestern-most Kurdish area of self-rule in Syria. Russian military personnel, ostensibly deployed to Afrin to monitor the cease-fire agreement reached at Astana, Kazakhstan, wore the YPG's insignia. Thus Russia sent an unequivocal signal to Ankara that Turkey’s partnership with Moscow in Syria has its limits, and one such limit was Erdogan’s efforts to push the Kurds from the picture.

The United States had sent Ankara the same message in March. Erdogan had hoped that the administration of US President Donald Trump would differ from its predecessor, but Tillerson’s visit to Ankara could not salvage the troubled relationship. The Americans still had no enthusiasm for replacing the SDF with Turkish troops for future Raqqa operations. In statements surrounding Tillerson's visit, Turkish officials could not conceal their disappointment.

The worst-case scenario for Ankara has been the possibility of US-Russian coordination in Syria, which would not leave much, if any, room for the role Turkey wants to play. From Afrin to Manbij and Raqqa, that seems to be exactly what is happening. Turkey’s anti-American partnership in Syria is not paying dividends.

After Turkey downed a Russian fighter plane in November 2015 and relations between Ankara and Moscow soured, Russia blocked Turkey from Syria. The rapprochement achieved after Erdogan apologized to Russia allowed Turkey to regain access to Syria, but its room to maneuver was limited by restrictions Russia placed on the area west of the Euphrates. East of the Euphrates, Turkey was limited by Washington.

The snubs by Washington and Moscow, apart from political reasons, have military explanations as well. Contrary to what the Turkish public has been told, Turkey’s operation in Syria was a poor military performance. The Kurds' success in capturing Manbij had prompted Ankara to launch Operation Euphrates Shield with the goal of preventing two Kurdish cantons controlled by the Kurdish Democratic Union Party from ultimately connecting with Afrin. The main objective of the operation had never been to oust IS from its positions, but to remove the perceived Kurdish threat to Erdogan’s nationalist Turkey.

Another make-believe military success was the taking of Dabiq, a city only 6 miles south of the Turkish border, from IS. That was in October, two months after the start of Operation Euphrates Shield. IS put up no real resistance in either Dabiq or Jarablus. The resistance came in al-Bab, and victory there took three months, with Russian air support. With such a poor record, there was no compelling reason from a military perspective for Moscow or Washington to replace the Syrian Kurds on the ground with the Turks from the north.

Turkey's control of 770 square miles of Syrian territory, sandwiched between Russian-protected Afrin and US-protected Manbij, could become a problem. How long will Ankara maintain a military presence there? What if the Syrian regime, whose legitimacy is already suspect in Ankara's eyes, asks Turkey to leave or to hand the area over to it? A potentially bigger question is, if Moscow and Washington act in tandem and ask Ankara to withdraw its military from Syria, will Turkey comply or will it defy them and come to be regarded as an occupation force?

This last question raises additional issues. Could Turkey endure as an occupation force in Syria? Is there a danger of a standoff between the Syrian army and the Turkish Armed Forces? Is there any chance Turkey could turn its international isolation from a weakness into a position of strength in Syria?

These are questions to be explored in Middle Eastern geopolitics, but they do not preclude writing Turkey’s postmortem in Syria following the announcement of Operation Euphrates Shield's conclusion.