Turkey demands US support for its operation in Syria

Turkish President Recep Tayyip Erdogan has accused Washington of not providing air support to Turkish forces in al-Bab and of supporting the Islamic State instead. 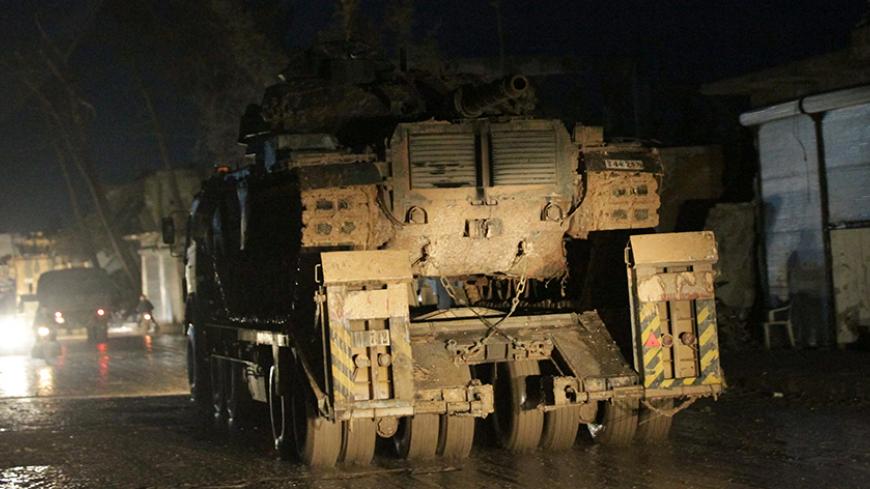 Despite Turkey’s high-profile collaboration with Russia and Iran aimed at ending the Syrian crisis, Turkey’s position in Syria remains confusing.

Realizing that its fight against the Islamic State (IS) in the group’s stronghold of al-Bab is proving to be more difficult and costly in terms of lives than initially expected, the Turkish military is accusing its Western allies of deserting it and the Turkey-backed Free Syria Army (FSA) as they combat terrorism in Syria.

In a progress report prepared for the press, the Turkish military said it was not getting any help from its allies, which it claimed were merely looking on as Turkish forces engaged in fierce fighting in al-Bab.

The military added that delays in launching the US-led operation to liberate Raqqa had also enabled IS fighters there to move to al-Bab to fight Turkish forces and the FSA.

President Recep Tayyip Erdogan went further and claimed that the US-led coalition was not only withholding support from Turkey’s campaign in al-Bab, but was also backing IS, as well as the Democratic Union Party (PYD) and its military wing, the People's Protection Units (YPG).

According to Ankara, the PYD and the YPG are terrorist groups linked to the outlawed Kurdistan Workers Party (PKK), but it has failed to convince Washington.

“It’s very clear. We have confirmed evidence, with pictures, photos and videos,” Erdogan claimed earlier this week with regard to his accusation.

Erdogan also said the US-led coalition was not honoring its promise to help Turkey capture al-Bab. “Whether they do or they don’t, we will continue along this path in a determined way,” he said. "There is no going back.”

Washington denied Erdogan’s claim that it is aiding IS as “ludicrous,” but repeated that it would continue to work with the YPG against IS.

Turkey wants to prevent the Syrian Kurds from gaining an autonomous region along the Turkish border. It has vowed to keep YPG fighters out of al-Bab, and to expel them from the nearby town of Manbij. On Dec. 24, Erdogan reiterated that al-Bab will be taken, and that the Turkish military would then move on to Manbij, and from there to the "IS capital" of Raqqa.

In a further sign that the Turkish operation has run into difficulties, Erdogan’s spokesman Ibrahim Kalin told reporters, "The international coalition must carry out its duties regarding aerial support to the battle we are fighting in al-Bab.” He added that withholding this support was “unacceptable.”

Turkey has openly said that the aim of its Operation Euphrates Shield in Syria, launched Aug. 24, is to not only target IS but also the YPG. Washington, however, does not consider the YPG to be a terrorist group and has also declared openly that it wants Turkey to concentrate on fighting only IS in Syria.

The United States initially provided air support to Turkish forces and the FSA as they moved against IS in the towns of Jarablus and Dabiq, which were captured with relatively few casualties. The US military announced in November, however, that it was not participating in Turkey’s operation in al-Bab. This announcement came after Turkish forces started bombing YPG positions around al-Bab.

In August, the town of Manbij was captured from IS by the US-backed Syrian Democratic Forces (SDF), which is comprised mainly of YPG fighters. Erdogan’s determination to move on to Manbij appears to be another reason why the United States is reluctant to help Turkey in al-Bab.

According to the perplexing scenario put forward by Erdogan, Turkey’s aim is to capture al-Bab before the YPG, rid Manbij of YPG fighters and work with the US-led coalition to liberate Raqqa from IS, after convincing Washington to dump the YPG. How it plans to achieve all of this on its own is not clear.

Nihat Ali Ozcan, a security expert for the Ankara-based Economic Policy Research Foundation of Turkey, argues that “clashing agendas” is behind Washington’s reluctance to help Turkey in al-Bab.

“Washington wanted Turkey to move only 20 kilometers [12 miles] deep into Syria and close the access roads in and out of Turkey used by [IS],” Ozcan told Al-Monitor. “When Turkey went beyond this and started attacking the YPG, US plans — especially with regard to capturing Raqqa — were disrupted."

He added, “It seems as if Washington wants to teach Turkey a lesson now by leaving it on its own in al-Bab.”

Ankara’s dilemma is that Russia is also unlikely to provide military support to Turkey in al-Bab, despite the diplomatic cooperation between the two countries in Syria.

According to Ozcan, Russia’s limited support for Operation Euphrates Shield is also contingent on Turkey’s remaining focused on “killing radical Islamists,” and not going after other groups or posing difficulties for the Syrian regime.

The daily Hurriyet reported this week that Russia was preventing Turkish fighter jets from flying over al-Bab. Citing unnamed sources the paper said, “Russia does not want Turkish jets in the region because it is going to engage in military activities south of al-Bab.”

The Syrian regime is also keen to capture al-Bab before Turkish forces and the FSA. Some analysts have even argued that the regime in Damascus would rather see Kurds in the town than Turkish forces or the FSA.

Ankara’s fixation on the Syrian Kurds, and its inability to address this issue politically, seems to be turning into the boulder on which Turkey’s Syria agenda founders. There is also no guarantee that Moscow will ultimately support Ankara’s line against the Syrian Kurds.

Although Moscow does not support Kurdish autonomy, Russian officials have said that the Kurds must also have a voice in any Syrian settlement.

Sources close to the Turkish government are signaling their hope that the US position will change under the presidency of Donald Trump. Hurriyet columnist Abdulkadir Selvi, who stands close to Erdogan and the ruling Justice and Development Party, indicates that the government has great expectations of Trump.

“Ankara is preparing for the Trump era. It values Trump's stated position about not working for regime change in other countries, but concentrating on fighting terrorism,” Selvi wrote in his column.

He was referring to the widespread belief among government circles that the Obama administration was somehow involved in the July 15 coup attempt in Turkey aimed at toppling Erdogan. Ankara is still smarting over Washington’s reluctance to extradite Fethullah Gulen, the Islamic cleric accused of masterminding the coup attempt.

Selvi said Ankara wants Trump to see matters from Turkey’s point of view and to “mark a new beginning” in Turkish-US ties. Trump has nevertheless expressed his admiration for Syrian Kurdish fighters.

Given the openly expressed desire by Trump and Russian President Vladimir Putin to cooperate to end the Syrian crisis, it remains to be seen if Turkish hopes invested in the new US administration will bear fruit or merely compound Turkey’s already difficult situation in Syria.