Turkey has an important decision to make now that it has helped Free Syrian Army troops win a major battle for border control in northern Syria. 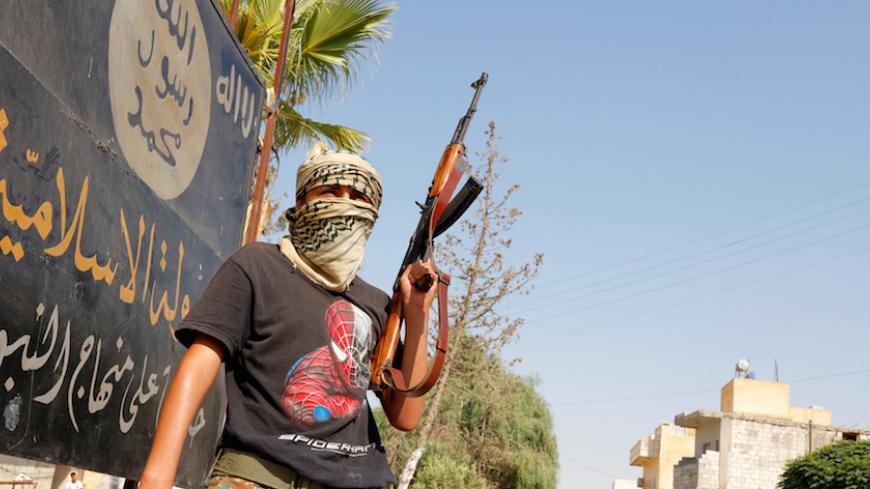 A member of the Turkish-backed Free Syrian Army patrols in the border town of Jarablus, Syria, Aug. 31, 2016. - REUTERS/Umit Bektas

Now that control of the Turkey-Syria border has been wrested from the Islamic State (IS) between al-Rai and Jarablus, what will Ankara's next target be: IS in al-Bab or the Kurdish People's Protection Units (YPG) in Manbij?

On Sept. 4, 12 days into Operation Euphrates Shield, Free Syrian Army (FSA) elements supported by a Turkish armored task force entered al-Rai and took over the 98-kilometer (61-mile) stretch of border. Since 2014, this area had been the main supply route for IS personnel, money, guns and logistics, and the group's main link with the outside world. The question now asked by all concerned is: What next?

Capturing the border stretch that until now was controlled by IS serves the interests of everyone but IS — certainly the United States and Russia. All had agreed on the need to rid this area of IS. But we have also arrived at a critical juncture in Operation Euphrates Shield where joint interests are about to become conflicting interests.

The impression Al-Monitor got from sources in Ankara is that clearing IS from just the border will not be sufficient and further moves south are needed. The growing Turkish military presence near the border reinforces this line of thinking. As I emphasized in my Aug. 25 Al-Monitor column, Ankara’s primary strategic goal with Euphrates Shield was to prevent the YPG, which is linked to the Kurdistan Workers Party (PKK), from dominating northern Syria, and to assume full control of the Turkey-Syria border. This is why Ankara wants to capitalize on its field success so far and expand the operation toward Manbij.

In the operational environment of Syria, where field circumstances sometimes change by the hour, it is critical to maintain the operational pace and capitalize on gains. This is why Ankara wants to move toward Manbij quickly. And remember, Ankara has persistently said that to preserve the territorial integrity of Syria the operation should target all terror groups in northern Syria.

Ankara’s drastic change of position from “Assad must go” to “Syria’s territorial integrity must be preserved” must have pleased Syrian President Bashar al-Assad and Russia so much that they have been withholding any negative reactions that could change the status on the ground. Although Washington continues to be at a loss about the future of Syria, it also finds the idea of preserving Syria’s territorial integrity a positive one. The Kurdish Democratic Union Party (PYD) is becoming politically isolated. In short, no other group with interests in Syria still backs the idea of the PYD linking its Afrin province in the west with Kobani and Jazeera in the east to form a de facto statelet that might endanger Syria’s territorial integrity.

Turkish news media reported a critical detail from Turkish President Recep Tayyip Erdogan’s meeting with US President Barack Obama on the sidelines of the G-20 summit, held Sept. 4-5 in Hangzhou, China. According to coverage of the meeting, when Obama said, “The PYD has withdrawn from Manbij and only the Arab elements of the SDF are there,” Erdogan reportedly replied, “Since the PYD has withdrawn, it means FSA units will enter Manbij without fighting.”

From all this, Ankara’s scheme can be deciphered: Prevent at all costs the YPG from capturing al-Bab from IS and somehow persuade Washington to bring Manbij under FSA control.

“This is precisely what is being negotiated at the table now,” retired Col. Ali Bilgin Varlik of the Ankara-based Central Strategy Institute told Al-Monitor. “In an environment when clashes with the PKK are continuing, and three to four soldiers are killed daily, the politicians in Ankara cannot expect the Turkish public to approve any operation that will allow a corridor between Kobani in the east and Afrin in the west. The priority for the Turkish public is to rule out a PYD corridor in northern Syria.”

In Turkey's best-case scenario, it will move from al-Rai to Dabiq, which is of major symbolic importance for IS, to block the YPG from advancing to al-Bab. If Ankara succeeds, Washington will have no other option but to have FSA wrest al-Bab from IS. At this point, Ankara would tell Washington, “Yes, the FSA will go to al-Bab, but first give us Manbij."

In short, Ankara wants to make the FSA an indispensable force to capture al-Bab and then to bargain with Washington for an assault on al-Bab in return for Manbij. The question we can't answer yet is, will Washington sacrifice Manbij to have the FSA capture al-Bab? US anti-IS coalition envoy Brett McGurk met recently with PYD and YPG officials, which is an important indicator that to preserve its alliance with the PYD, the United States will not abandon the YPG.

The worst-case scenario for Ankara is for the FSA to engage both the YPG and IS in al-Bab, and then the YPG at Manbij. The FSA could thus be forced into simultaneous clashes on two fronts. Should the FSA performance on the ground not be adequate, then the Turkish army could be drawn into these clashes. If, in such a case, Washington and Moscow leave Turkey alone, then Ankara would be forced to choose between giving military support to the FSA or withdrawing.

To avoid such a disastrous scenario, Ankara is giving its utmost attention to its diplomatic efforts. Sources in Ankara say that if clashes between the FSA and the YPG did not escalate south of Jarablus until now, it is because of the diplomatic traffic between Turkey’s Foreign Ministry and the chief of general staff with their US counterparts.

But how long can Ankara sustain this diplomatic intensity with other pertinent actors in Syria? According to Varlik, this is directly related to the FSA's military performance in the field. He thinks the reasons behind continuing US cooperation with the PYD could be weakened by FSA success in the field.

Is Washington’s relationship with the PYD short-term, purely militarily indexed only to combat against IS, or does the United States have a secret agenda for a Kurdish corridor from Jazeera to the Mediterranean that it has promised to Syrian Kurds?

Is the US-PYD relationship guided by realpolitik, or a US promise for an autonomous Kurdish corridor? Looking at the swift pace of developments in northern Syria, we will get the answers soon enough.

Turkey wants to prevent the Kurds from establishing a corridor and, more importantly, it wants a major role in determining Syria's future. Strategist Ali Nihat Ozcan warns in his recent Milliyet article that Turkey might have to deploy a force of 35,000-40,000 (six to eight brigades) in northern Syria for the next 10 years to accomplish these goals, given the political and military prerequisites, topographical features, the FSA's capacity for combat and the existence of asymmetric threats such as IS and the YPG.

Is Ankara planning such a strategic engagement, or will we forget about Operation Euphrates Shield in a month or so?

Given Syria's complexity, with its long list of players and conflicting interests, I am not sure even Ankara knows the answer yet.