What comes next for Turkey after Jarablus victory?

Turkey’s strategic goals and field preparations signal that it plans to stay in northern Syria for quite some time. 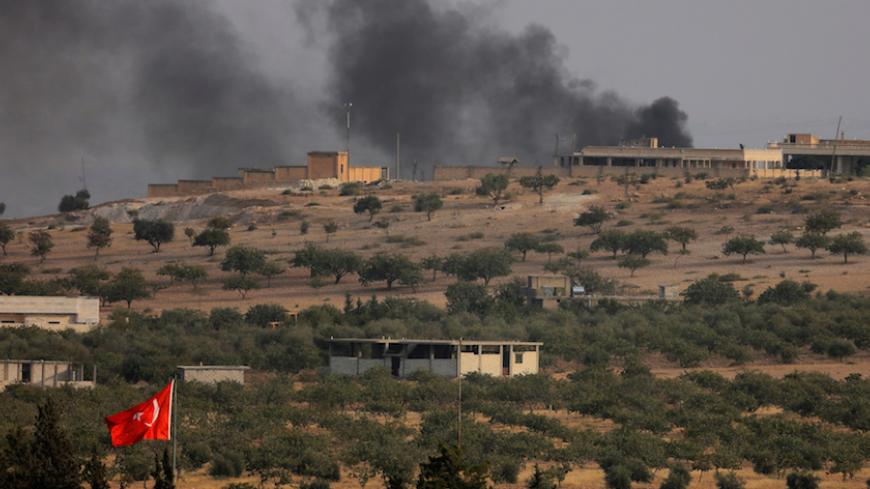 Smoke rises from the Syrian border town of Jarablus as it is pictured from the Turkish town of Karkamis, in southeastern Gaziantep province, Aug. 24, 2016. - REUTERS/Umit Bektas

What are the strategic goals of this operation? Can it expand to the al Rai-Azaz line in the west and, even more important, southeast toward al-Bab to interdict the Kurdish People's Protection Units (YPG) and prevent them from advancing westward and defying Turkey’s oft-stated red lines?

An Aug. 25 headline in the pro-government daily Yeni Safak read, “This is just a beginning.” Sources in the Free Syrian Army (FSA) who spoke to Al-Monitor on condition of anonymity described Euphrates Shield as a complex operation "with major goals.” In Ankara, the prevailing belief is that the operation is, above all, a diplomatic success of Turkey’s changing approach to Syria and the intensive shuttle diplomacy that was conducted. On the military front, Ankara sees the capture of Jarablus in 12 hours without casualties and avoiding a major clash with the Islamic State (IS) as a significant success. A security source in Ankara told Al-Monitor, “It is time to benefit from these successes. It would be a gross mistake to think of limiting the operation only to Jarablus, after preparing for it for a year.”

Sources in Ankara’s strategic corridors and in the field spoke with Al-Monitor about the envisaged duration of the operation and its dimensions. Ankara’s goals can roughly be divided into political and field objectives.

On a political level, Ankara wants to consolidate Sunni armed opposition under a single roof, at least in northern Syria, but preferably in the entire country. Ankara appears to have persuaded Washington and Moscow that a significant portion of the Syrian opposition should not be sidelined as Syria's future is being determined. Turkey thinks that with this operation it has scored an opportunity to unite the Syrian opposition militarily toward a single objective, under a single command and in a single military structure. Ankara hopes that by uniting the opposition ranks first in northern Syria, then in Aleppo and Idlib, the FSA can become a credible force on the ground and be accepted at the negotiation table.

But the past record of the FSA raises questions about its performance on the ground. A source who spoke with Al-Monitor but did not want to be identified said, “The war in Syria is a war of ideologies. A Shiite militiaman dies for Twelver imams; a YPG man dies for [imprisoned Kurdistan Workers Party (PKK) Abdullah] Ocalan and Kurdish nationalism. Who will the FSA militant sacrifice himself for? Without jihadi motivation, the majority of the FSA looks more like a mercenary gang fighting for money.”

Although Ankara might have seen an opportunity to consolidate the Syrian opposition politically and militarily, motivating these forces will not be easy. They will need an incentive to boost their combat effectiveness, but overdoing it could spill over into "terrorism." No doubt the participation of "moderate jihadi" groups such as Faylaq al-Sham and Ahrar al-Sham will provide some motivation. Ankara has to be careful using such groups in a blend with the FSA, so as not to worry Washington and Moscow.

The primary goal of this operation is to establish in the Jarablus region a permanent military base where it can train and equip the FSA while dominating the terrain. This base will be linked to Turkey with an air corridor. Ongoing engineering works in Jarablus indicate such a goal. If Ankara sends a commando battalion to Jarablus, then we will understand that Ankara is very seriously considering a permanent military base at Jarablus. If Ankara cannot persuade other countries to go along with the idea, then Ankara’s Plan B is to structure Jarablus as a military power center for the FSA in northern Syria, with a presence of Turkish soldiers.

Turkey’s second strategic goal with this operation is to capitalize on its success by advancing west to the al Rai-Azaz line, which Ankara calls the Jarablus-Cobanbey line. Ankara has two objectives with such an expansion. First will be to totally dominate the 55-mile border stretch between Jarablus and Cobanbey. The other goal will be to apply pressure from the east on the Afrin canton of the Kurdish Democratic Union Party (PYD), which already is under pressure from the north. Actually, both Washington and Moscow favor Ankara’s severing this most important supply line of IS inside Syria. This will of course require Ankara to assure Washington and Moscow that it actually intends to combat IS. The lack of strong reactions from the United States and Russia to Ankara’s operation until now suggests such assurances were given and the countries are satisfied, at least for the time being.

Ankara's third goal with Euphrates Shield is the most risky one: to take advantage of the success at Jarablus to advance southwest and capture al-Bab. If Ankara opts for this goal, the name of the operation will have to be changed from Euphrates Shield to "Euphrates Dagger," because it will terminate the PYD's dream of linking up with Afrin via al-Bab and dominating the area northwest of Aleppo, as well as totally eradicating IS connections to Turkey.

Long-term IS preparations at al-Bab have turned the town into a formidable resistance stronghold. Unlike at Jarablus, IS has heavy manpower strength and fortifications in al-Bab, where thousands of civilians live. But we also know that the Syrian Democratic Forces, which is made up mostly of Kurdish YPG, has its eyes on al-Bab as well. If the FSA, supported by Ankara, keeps up the momentum it displayed at Jarablus and captures al-Bab, it will have a major stronghold in northern Syria.

Ankara’s increasing artillery fire from Turkey on YPG targets in the Afrin canton as of Aug. 26, and the first-ever bombing of YPG targets in Afrin by Turkish warplanes, could be harbingers of a westward shift of operations.

Now everyone, especially Washington and Moscow, is closely monitoring the field performance of the Turkish-supported FSA. If the performance is impressive, then as a sign of goodwill to Ankara, Washington and Moscow might give the FSA the opportunity to liberate al-Bab. If the performance is poor, then the Kurdish YPG will be allowed to assault al-Bab. Washington and Moscow, which have staged a deadly competition between the FSA and the YPG, are pleased with the developments. Ankara’s test will be motivating the FSA. The Syrian Kurdish PYD will then have to decide if it can accept that its rise in northern Syria has ended and that now there is a highly motivated, competitive force supported by Ankara.

In the coming days, the most critical question will be who will capture al-Bab from IS: the YPG, supported by the PKK, or the FSA, supported by Ankara?

To read Ankara's intentions, the type of military units it uses in Syria and its military moves will have to be watched carefully. Don’t forget, if Ankara dispatches a commando battalion to Jarablus, it will mean Turkey is there to stay indefinitely. If it sends the mechanized infantry brigade waiting at the border, then Ankara’s intention will be to expand toward the west and clean up the border stretch by moving to Azaz via al-Rai. But if it sends an armored brigade along with its mechanized infantry brigade, then we will know that Ankara’s next target is al-Bab. My understanding is that Ankara will first try to complete its full control of the Jarablus region. Prolonging the operation's duration will provide Ankara with more cards at the negotiation table, so one can surmise that it intends to stay in northern Syria for the long term.

Meanwhile, the Turkish Armed Forces (TSK) sustained its first fatality in Euphrates Shield, confirming experts' concerns that clashes between the TSK and the YPG were imminent. On Aug. 27, Kurdish YPG militants some 4 miles south of Jarablus hit two Turkish tanks with Russian-made Kornet anti-tank missiles, killing one sergeant and wounding three soldiers. The TSK responded with artillery and tank fire and sent in reinforcements to Jarablus. Reports from the ground say Turkey continued air force and artillery fire on YPG targets Aug. 28.

Although not yet confirmed, there were also reports of the first civilian casualties from Turkish shelling and air attacks. Turkey has rejected the claims, saying most of the casualties were YPG militants taking cover in villages.