Will Trump see eye to eye with Erdogan's plans in Iraq, Syria?

Ankara is hoping to find harmony with the incoming US administration on its fight against the Islamic State. 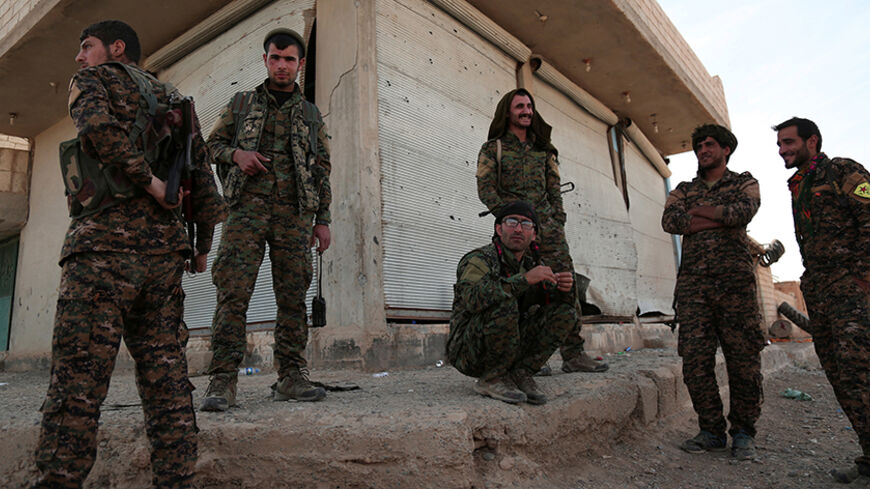 Fighters from the Syrian Democratic Forces gather in the town of Hisha after they took control of the area from Islamic State militants, in the northern Raqqa countryside, Syria, Nov. 14, 2016. - REUTERS/Rodi Said

US Joint Chiefs of Staff Chairman Joe Dunford visited Ankara Nov. 6 and held a 4½-hour meeting with his Turkish counterparts.

This sudden, unplanned visit led some to wonder if there was a rupture between Ankara’s strategic thinking on Iraq and Syria and the United States’ goals in the region. This article will attempt to analyze the factors that prompted the Dunford visit and scenarios of what Ankara may have in mind.

Ankara was caught totally off guard by the Raqqa operation the Syrian Democratic Forces (SDF) launched Nov. 6. Ankara was expecting that operation to begin after the US presidential election on Nov. 8. The SDF is dominated by the People's Protection Units (YPG), which is affiliated with the Kurdistan Workers Party (PKK). Turkey considers the PKK a terrorist organization.

In the Nov. 6 operation, about 25,000 YPG fighters who had been controlling the Kurdish cantons of Kobani and Jazeera turned their backs to Turkey and launched an assault toward Raqqa in the south. The Kurds practically vacated their two cantons and left them wide open to a possible offensive by Turkey. If Ankara is serious in its intention to intervene east of the Euphrates River, that area is now suitable for an operation similar to Euphrates Shield. This is how we must read the Dunford visit.

“What profoundly disturbs Washington nowadays is Ankara’s increasing unpredictability and the resulting uncertainty," said a US source who spoke to Al-Monitor on condition of anonymity. "Therefore, we were told to interpret Dunford’s visit and his long meeting in Ankara as a message of, ‘Don’t do anything reckless in such a sensitive period.’”

Is Ankara likely to take unexpected, reckless action? To find the answer, we have to analyze three factors. First is the Turkish public’s support, which is essential for a cross-border operation against Syria or Iraq. The second is the United States applying the brakes on Turkey, and third, the current capabilities of the Turkish army.

Where does the Turkish public stand regarding a cross-border operation? According to a poll conducted by A&G Research Co, at the beginning of November, 91% of the public supports anti-terror operations inside Turkey.

As for Syria and Mosul in Iraq, 78% of Turks surveyed support possible military operations there, and 88% support Turkish President Recep Tayyip Erdogan’s leadership in security affairs. Although we are not fully informed on the methodology of the poll and whether the findings are representative of the Turkish public, one reality is hard to ignore: Erdogan has public support for anti-terror operations inside Turkey and in Iraq and Syria.

Is that enough for Ankara to undertake an operation in Iraq or Syria? What are Ankara’s military options there?

In northern Syria, Ankara’s primary goal is to find a way to take part in the operation launched Nov. 6 east of the river. The strategic goal behind this is the desire to end Democratic Union Party (PYD) control of the Kobani and Jazeera cantons. (The Kurdish nationalist PYD is the PKK's Syrian offshoot.) If Ankara cannot impose a full military presence east of the Euphrates, it will make do by cleansing al-Bab of the Islamic State (IS) and Manbij of the YPG, thus creating a rectangular buffer zone of Jarablus, Manbij, al-Bab and al-Rai.

Ankara has two main goals in Iraq: to increase Turkey’s effectiveness north of Mosul and thus become part of the Mosul operation, and to eliminate the PKK's domination of the Sinjar area that forms a bridge between Iraq and Syria. This would also mean splitting the PKK corridor from the Qandil Mountains to northern Syria. Ankara believes it is vital to split the Shiite corridors: one in northwestern Iraq and Syria, and the other from Syria to Lebanon. In other words, the worst-case scenario for Ankara is to be hemmed in by a Shiite corridor from Iran to Lebanon in the south and a PKK corridor from Qandil to Afrin in the north.

As to the United States applying the brakes on Turkey, the US presidential election victory by Donald Trump was received with much optimism in Ankara. Many key names in Ankara believe that the Trump transition team will understand the dynamics of Iraq and Syria and support Ankara in its struggle against the PKK and PYD in northern Syria and against growing Shiite influence in Iraq. It is not hard to guess that Ankara will focus on setting up good relations and thus increase cooperation with the Trump team until Trump’s inauguration Jan. 20. Erdogan's Justice and Development Party teams are already busy with diplomatic efforts in New York and Washington.

How will Ankara assess a green light from the Trump administration? The answer might be found in the deployment of Turkish reinforcements on the ground. At present, the Turkish army has amassed its reinforcements west of the Euphrates River where Operation Euphrates Shield is in progress. Turkey has deployed two mechanized infantry brigades, an armored brigade and a commando brigade along the border abutting this area. The Turkish army is relying on its 30-mile-range, 155-millimeter howitzers to interdict east of the Euphrates. Although Turkey's army has moved its 28th Mechanized Infantry Brigade from Ankara to Silopi on the Iraq border, that force is not sufficient for an operation in Mosul and Tal Afar in Iraq.

Another problem Ankara has in northern Syria is its inability to fly its warplanes over that area whenever it wants. The solution to this problem lies not in Washington, but in Moscow. Intensive diplomatic efforts with Moscow produced some positive results when, on Nov. 13, Turkish jets attacked YPG targets around Ghazzawi village in Afrin canton following the Oct. 29 visit of Turkish Chief of General Staff Hulusi Akar and Chief of National Intelligence Hakan Fidan to Moscow.

With sustained artillery fire and air attacks, Ankara wants to block YPG forces from advancing to al-Bab. As of now, Moscow appears to have agreed.

If Washington and Moscow both give the green light to Ankara, what will be Turkey's priority target and when is it likely to take action?

I assess Ankara’s strategic priority to be west of the Euphrates. Ankara will do whatever it can to direct its allied Free Syrian Army (FSA) forces to al-Bab. This explains why Turkey has been lobbying Moscow to allow Turkish warplanes to fly over al-Bab, to give close air support to FSA units. We understand by the air operation of Nov. 13 on YPG targets at Afrin that Moscow has lifted its objection to Turkish planes operating in Syrian air space.

If it captures al-Bab, Ankara's next target will be Manbij, but that will depend on the progress with the Trump team. Today, Turkey-supported FSA units are about 6 miles north of al-Bab and are making slow progress. But many expect tough IS resistance in al-Bab, where it has been digging in for a long time. In a way, the outcome at al-Bab will demonstrate the strength and effectiveness of FSA-Ankara cooperation on the field.

Can Ankara, which appears to have secured public support at home and has sufficient forces west of the Euphrates, first convince Moscow and capture al-Bab, and then persuade Washington to allow the FSA to seize Manbij? Obviously, such critical questions indicate the need for proper synchronization of military success in the field with diplomatic negotiations.

Now with the radical change in Washington, will that new administration also be wondering if Turkey will "do something reckless," as the current administration is asking, or will Trump go along with Turkey's plans?