PYD leader Salih Muslim told Al-Monitor they are not worried about Ankara's hostile stance toward the PYD and YPG, and ruled out Turkish military action targeting al-Bab in Syria. 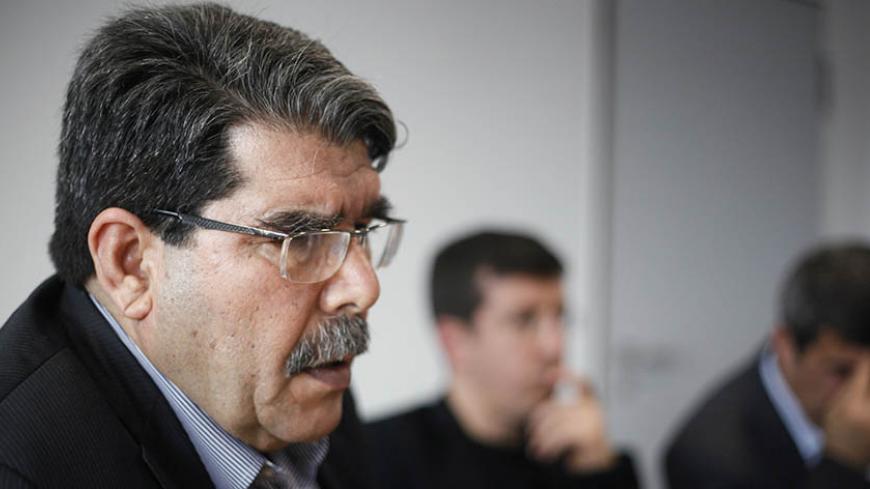 I ran into Syrian Kurdish Democratic Union Party leader (PYD) Salih Muslim at a well-protected hotel in a Stockholm suburb. Our previous meeting had taken place some six months ago in Iraqi Kurdistan’s Sulaimaniyah when I had asked him whether it was true that the Americans were encouraging the PYD to operate east of the Euphrates and advance toward Raqqa, despite Turkey’s pressures not to let the Syrian Kurdish forces move to the west of the Euphrates. "Before attacking Raqqa, we must retake strategically located Manbij from Daesh [the Islamic State, or IS] to terminate the logistical support provided by Turkey to the Syrian capital [Raqqa] of the Islamic State,” Muslim responded then. “If Americans are serious about the liberation of Raqqa, they have to support us to cleanse Daesh from Manbij.”

Raqqa is on the east bank of the Euphrates, but Manbij is to the west of the river, northwest of Raqqa.

Months later, following three months of fighting, Americans provided air support to the Syrian Democratic Front (SDF) forces, which predominantly consist of the Kurdish People’s Protection Units (YPG), although it does have an Arab component. The fall of Manbij to the SDF prompted the Turkish military incursion into Syrian territory. Syrian opposition elements supported by Turkey calling themselves the Free Syrian Army (FSA) moved into Jarablus on the Turkish border and secured a 50-kilometer-wide (31-mile) stretch of land, pushing IS westward to al-Rai.

Recently, Dabiq, a town believed to have an important psychological importance for IS, was also taken by Turkish-supported forces.

Turkish President Recep Tayyip Erdogan, buoyed by Turkish and Turkish-supported Syrian opposition military advances and apparently uneasy about the ongoing American commitments to the PYD and the YPG (which he sees as terrorist organizations, and also always mentions in tandem with the Kurdistan Workers Party and Daesh), on Oct. 27 openly declared Turkey’s aim of moving farther south to capture al-Bab and then to head east to Manbij to kick out the Syrian Kurdish forces there before finally marching farther east to liberate Raqqa from IS.

However, the SDF announced Nov. 6 that an operation to liberate Raqqa had begun. The same day, the chairman of the US Joint Chiefs of Staff, Joseph Dunford, rushed to Ankara for a 4½-hour meeting with his Turkish counterpart.

And on Nov. 7, I was with PYD leader Muslim to hear his views on the rapidly developing situation in northern Syria. Was he worried about Turkey’s hostile stance against the PYD and the YPG and also its professed military aim vis-a-vis al-Bab, Manbij and Raqqa?

He wasn’t. He ruled out any possibility of Turkish military action targeting al-Bab. He said that while Turkish and Turkish-supported Syrian opposition forces are nearly 20-25 kilometers away, the Syrian regime’s army and its allies, ranging from Hezbollah to Iranians, are as close as 12 kilometers from al-Bab. Salih said that al-Bab is a very strategic location for Aleppo and that it will be nearly impossible for Turkish forces to move into it unless the Turkish government risks a tough military showdown. He did not predict that it will.

Next I asked about Manbij. Was he worried that the Turkish army, which is fairly close to Manbij, will attack it to oust the SDF, or rather the YPG force, seizing that strategically positioned town on the road to Raqqa?

Muslim responded briefly and bluntly. “No way!” He has usually been reluctant to speak on thorny military issues concerning the fight against IS in northern Syria.

Why was he so confident? “Because we are there. We [implying the Kurdish YPG] are in Manbij,” he said.

He sounded adamant that the Kurdish forces and their Arab allies in the SDF will not concede Manbij without putting up a fight.

Erdogan unequivocally and persistently had stated that the United States should put aside its alliance with the Syrian Kurds and rely on Turkey for the liberation of Raqqa. What if Turkey moves in — for example, from Tell Abyad on the border — to retake Raqqa from IS?

Muslim retorted in an apparent irony: “How will they do it? Jump over us?”

The implication is not mind-boggling. As the operation to liberate Raqqa has already started with cooperation between the Americans and the SDF, Turkey is already on the sidelines. Was there any connection between the date of the beginning of the Raqqa operation and denying Turkey a role in it?

He neither denied nor affirmed this, evading the question. He said the first task will be to undertake the siege of Raqqa. The encirclement and ultimately the liberation will take some time.

“We are moving from the north and the west and southwest." He said that taking part from the east of Raqqa will be the Arab forces of Ahmad Jarba (a former opposition Syrian National Council chairman and a leader of the powerful tribal confederation of Shammar), and to the south, Arab tribes of the Deir ez-Zor region. The Americans are said to be organizing a local Arab force from the town of Raqqa itself.

But Dunford’s statement in Ankara following his meeting with his Turkish counterpart suggested that the United States may not be endorsing any role for the PYD and the YPG in Raqqa, while seeing one for Turkey.

“We always knew the SDF wasn’t the solution for holding and governing Raqqa,” Dunford said. “What we are working on right now is to find the right mix of forces for the operation. [The operation needs] a predominantly Arab and Sunni Arab force,” he said. “And there are forces like that. There is the moderate Syrian opposition, the vetted Syrian forces and the Free Syrian Army forces, and there is some initial outreach to forces in Raqqa proper.”

The meeting reinforced the long-held promise that the coalition would not move ahead with the seizure phase in Raqqa “without incorporating the Turks and their perspective into our plans,” Dunford said. “They will be helpful in identifying the right forces to do that.”

When I brought up Dunford’s statement, Muslim smiled. For him, it was more of a “declaration of intent” on the part of the Americans rather than a firm commitment toward Turkey that it will have a part in shaping Raqqa’s future.

My last question to Muslim was whether he was worried — also given his ideological background — about an American sellout of the Kurds. If history guides us, he has to be concerned. The Kurds tasted that in 1975 with the Algiers Agreement between Iraq and Iran, which was actually engineered by then-US Secretary of State Henry Kissinger.

“No,” responded Muslim. He is not worried. Not because the Americans have become more trustworthy after 40 years, but because the conditions are different. He claimed that the Kurds in Iraq under the leadership of Mullah Mustafa Barzani were not self-reliant in the 1970s but mostly dependent on Iran and other elements. “We are much better structured now,” he said. “We have been exercising self-rule on our territory since some time. And we proved ourselves as the best fighting force against Daesh. We did not knock on the doors of the Americans. They saw how we are on the battlefield and they allied with us. Their support with their air power is very important, but without us on the ground, it would not be as effective.”

He is very confident about solid cooperation with Washington. “Otherwise, the operation for the liberation of Raqqa could not begin,” he said.

All this was a day before the Nov. 8 election of Donald Trump as president of the United States of America. What lies in the near future for Syria, the Kurds and Turkey is now a huge question mark.