US promises Turkey role in Raqqa in surprise Ankara meeting

The United States has reached out to Turkey, which is fuming over US support for Kurdish-led forces in Syria, by sending its chairman of the Joint Chiefs of Staff to meet with his Turkish counterpart in Ankara and discuss Raqqa. 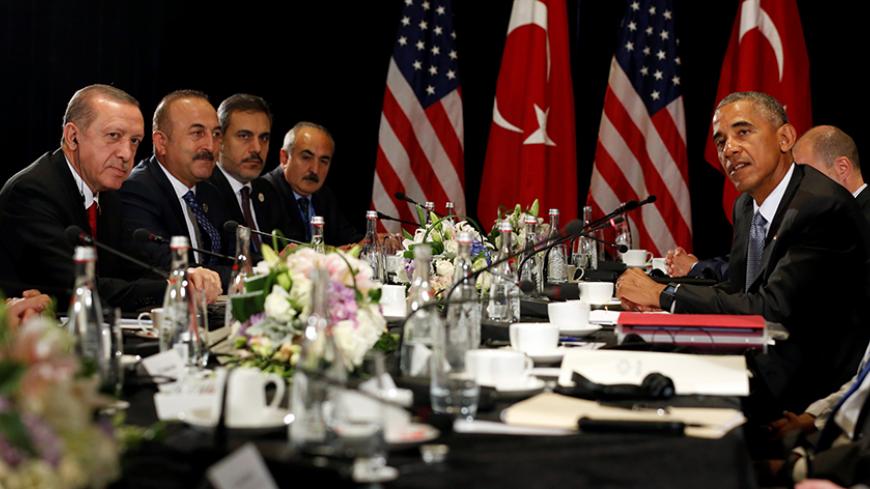 US efforts to appease Turkey over its collaboration with Syrian Kurdish-led forces to take Raqqa, the self-declared capital of the Islamic State, appeared to have yielded some progress over the weekend following an unannounced visit by Gen. Joe Dunford, the chairman of the Joint Chiefs of Staff, to Ankara.

Following 4½ hours of talks with his Turkish counterpart Hulusi Akar, Dunford said, “The coalition and Turkey will work together on the long-term plan for seizing, holding and governing Raqqa.” The US general, who characterized Turkish-American ties as “excellent” further asserted, "We always knew the SDF wasn’t the solution for holding and governing Raqqa. What we are working on right now is to find the right mix of forces for the operation.”

Dunford was referring to the Syrian Kurdish-led Syrian Democratic Forces, which remain the United States’ premier ally against IS in Syria. On Nov. 6, the SDF announced that it had launched an operation to retake Raqqa.

But the SDF’s activities will focus on isolating the city, a process that could take months.

Turkey continues to voice its opposition to the alliance because of the very close links between the SDF’s Kurdish component, known as the People’s Protection Units (YPG), and the Kurdistan Workers Party, the Kurdish rebel group that is fighting for Kurdish autonomy inside Turkey.

Dunford stressed that the coalition would not proceed with the “seizure phase” of Raqqa proper “without incorporating the Turks and their perspective into our plans.” He suggested that Turkish-backed Syrian rebels might be involved in taking the mainly Arab city: “[Turkey] will be helpful in identifying the right forces to do that.” In a further gesture of goodwill, the sides agreed that a high-ranking US officer and his staff would work in Ankara with the Turkish General Staff and act as a point of contact for the Combined Joint Task Force against IS. “We want to be totally transparent about this with our Turkish ally,” Dunford said.

It remains unclear, however, what Washington has promised the YPG in exchange for its support to take Raqqa, which lies outside Syrian Kurdistan. More likely Washington is trying to keep all sides on board and away from each other’s throats as it seeks to fulfill its stated goal to “degrade and destroy” IS. And though Dunford seems to have slapped a bandage over bleeding US-Turkish ties, the wound is getting harder to contain by the day.

Dunford’s visit came only days after Akar traveled to Moscow with Turkey’s powerful spy chief, Hakan Fidan, sparking alarm among Turkey’s NATO allies over a possible Russian-Turkish rapprochement. The Turks are believed to have sought to persuade Russia to allow Turkish-backed rebels to move toward the IS-held city of al-Bab. They returned from Moscow reportedly claiming that they had received its blessing, if only to advance closer to al-Bab if not to actually take it, which would be a very bloody affair anyway because IS is expected to put up a big fight. The likely outcome is that the Russians pledged to not let the YPG move on al-Bab either.

The mainly Arab city, where pro-Salafist sentiment is said to run high, has long been coveted by the YPG because its capture would allow the Syrian Kurds to link up the vast swath of territory they hold to the east of the Euphrates River with Afrin, a mainly Kurdish enclave that lies to its west.

Turkey is bent on preventing the YPG from doing so, and Russia has been artfully playing on this vulnerability to increase its leverage over the YPG and Ankara alike and to drive a wedge between both sides and Washington.

But the Turkish strikes wound up being a one-off thing. Days later, Syrian jets bombed Turkish-backed rebel forces in the north Aleppo countryside as they moved against the YPG.

Washington has made clear that it will not allow Turkish-backed rebels to go after the YPG in Arab-dominated Manbij or in Tal Abyad, another majority Arab town on the Turkish border, which the Syrian Kurds wrested from IS in June 2015 with American help. Washington has practically zero say over what happens on the ground and in the skies over northern Syria beyond the SDG-held town of Manbij, which has emerged as something of a demarcation line between US and Russian zones of influence. So contrary to the commonly held view, it cannot deliver al-Bab to either its Kurdish nor its Turkish allies. And for now, in the words of Syrian Kurdish commentator Barzan Iso during a Skype interview with Al-Monitor, “Russia will keep dangling this tasty meal without ever letting Turkey or the Kurds to eat it either.”