After President Recep Tayyip Erdogan named Turkey's next target as Manbij and the foreign minister promised to strike if the Kurdish People’s Protection Units don't withdraw, Turkish-backed fighters in Syria seem to be acting on the threats in a cluster of villages west of Manbij. 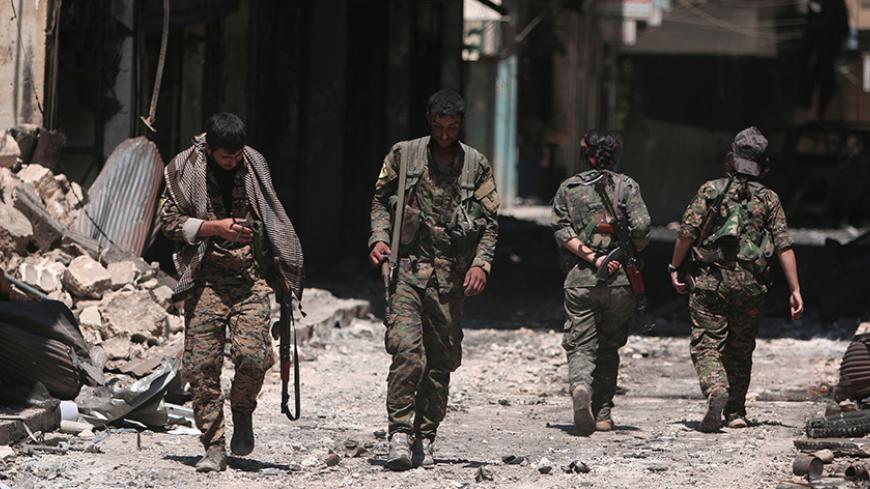 Syria Democratic Forces fighters walk on the rubble of damaged shops and buildings in the city of Manbij, Syria, Aug. 10, 2016.

As if the murky constellation of conflicts in Syria were not tangled enough, Turkey seems poised to muddy the waters further by escalating its battle against the Syrian Kurdish-led force that is helping the United States defeat the Islamic State.

Turkish President Recep Tayyip Erdogan has for some time now been vowing to capture Manbij, a Syrian Arab town that was liberated from IS by Kurdish-led Syrian Democratic Forces (SDF) with the help of coalition air power last year. “After the liberation of al-Bab from Daesh terrorists, Turkey’s new target in Syria is Manbij,” Erdogan told reporters March 1, using the Arabic acronym for the jihadi group.

“Manbij is a city that belongs to the Arabs, and the SDF also must not be in Raqqa,” Erdogan said.

Turkish Foreign Minister Mevlut Cavusoglu chimed in March 2, saying, “We have said that we would strike if the YPG fails to withdraw.” He was referring to the People’s Protection Units, the Syrian Kurdish militia that dominates the polyethnic SDF forces. Ankara labels it a terror group over its links to autonomy-seeking Kurdistan Workers Party rebels in Turkey.

Turkish-backed Free Syrian Army (FSA) fighters seemed to be carrying out Turkey’s threats March 1 as they moved on a cluster of villages west of Manbij. But the SDF thwarted these moves with one of its own. The Manbij Military Council set up by the SDF and trained by the United States to secure Manbij following the town’s liberation announced that it would surrender the targeted villages to Syrian regime forces and Russia to prevent a confrontation with Turkey and the FSA.

Regime forces have been advancing with Russian air support for some time, initially toward the IS-held city of al-Bab, over which Turkish forces and their FSA allies finally won control last week.

Regime forces have since fanned out northward from al-Bab, linking up with SDF forces south of Manbij.

Russia has proved to be a master at leveraging its military muscle in Syria in ways that allow Turkey and the FSA to pursue IS to the benefit of the regime.

What this portends for the Syrian Kurds’ five-year experiment with self-rule over a swath of territory running east of Manbij all the way to the Iraqi border is a big question.

Another is why the SDF’s top ally, the United States, has remained silent in the face of Turkish and regime advances. There may be several reasons. For one, Turkey has always made it clear that it will not tolerate any YPG advances west of the Euphrates River, where Manbij lies. The YPG and its political affiliates were supposed to leave once the town was fully freed. The United States offered guarantees to that effect. But the Syrian Kurds did not leave, and the Manbij Military Council is widely viewed as a YPG front.

Nicholas Heras, a senior fellow at the Center for a New American Security, believes the United States will stay out of the Turkish-Kurdish tussle over Manbij. This is because “the United States is not invested in a permanent SDF presence in Manbij and it will not want Manbij to be the cause of a war between the SDF and Turkey that would prevent the counter-IS campaign of achieving its true objective: the defeat of IS in Raqqa and throughout eastern Syria,” he told Al-Monitor in an interview.

The deal between the regime and the SDF will surely reinforce critics' long-running claims that the YPG is colluding with the regime, but it gets Washington off the hook. Indeed, the pact may even serve as something of a template for Raqqa. A nagging problem in plans to overrun the jihadis’ so-called capital is the lack of adequate manpower.

Turkey’s offer to take Raqqa with the FSA is likely to be ignored because the US military planners remain unimpressed.

While the United States would never want to cooperate directly with the regime, any help it can get on Raqqa would clearly not be unwelcome. And as recent developments in Manbij have shown, with Russia pulling the strings, the SDF and the regime are capable of working together when need be. It may not be all that bad an outcome for Turkey, either, for the alternative, a deeper US footprint in alliance with the Kurds, is viewed by Ankara as the biggest threat of all.