Could Turkey’s misstep in Manbij provide template for Raqqa? 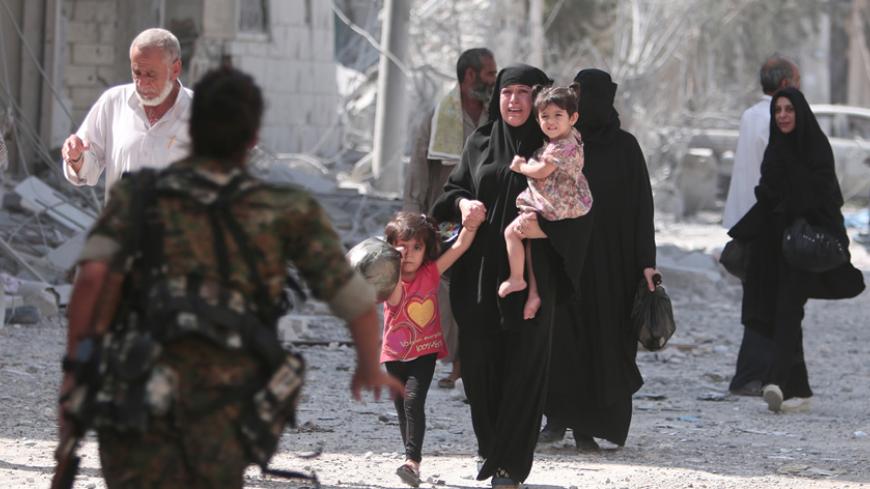 A Syrian Democratic Forces (SDF) fighter rushes to help civilians who were evacuated by the SDF from an Islamic State-controlled neighborhood of Manbij, in Aleppo governorate, Syria, Aug. 12, 2016. - REUTERS/Rodi Said

Turkish President Recep Tayyip Erdogan is not winning friends with US military planners by threatening to attack Manbij, a predominantly Arab town controlled by the Syrian Democratic Forces (SDF), the Pentagon’s partner of choice among armed groups battling the Islamic State.

The SDF is primarily made up of the Syrian Kurdish People’s Protection Units (YPG), which Turkey claims is linked to the Kurdistan Workers Party (PKK) and therefore a terrorist group on a par with the Islamic State (IS). The SDF, led by the YPG, drove IS forces from Manbij last year.

Erdogan’s threat if the YPG does not leave Manbij is hardly a surprise, as Operation Euphrates Shield, launched in August 2016, always had the dual purpose of defeating both the YPG and IS.

Amberin Zaman notes that Turkey’s latest lurch in its Syria campaign is already being blocked, another sign of the limitations of its forces and proxies relative to other Syrian parties.

“Turkish-backed Free Syrian Army (FSA) fighters seemed to be carrying out Turkey’s threats March 1 as they moved on a cluster of villages west of Manbij,” Zaman writes. “But the SDF thwarted these moves with one of its own. The Manbij Military Council set up by the SDF and trained by the United States to secure Manbij following the town’s liberation announced that it would surrender the targeted villages to Syrian regime forces and Russia to prevent a confrontation with Turkey and the FSA. Regime forces have been advancing with Russian air support for some time, initially toward the IS-held city of al-Bab, over which Turkish forces and their FSA allies finally won control last week. Regime forces have since fanned out northward from al-Bab, linking up with SDF forces south of Manbij.”

Despite their victory over IS forces in al-Bab last month, the Turkish military has few good options for its next moves in its disastrous Syria campaign. Nobody in Syria is clamoring for Turkish forces. Fehim Tastekin writes that the region surrounding Manbij “has many deterrent factors. Also, the YPG and the local military council are not the only ones who would see Turkey’s interference as occupation action. There is a diverse collection of local militias that will confront Turkey. Of course it is not possible to predict how far these local forces can get against Turkey unless the Kurds are involved on their side.”

Zaman asks “why the SDF’s top ally, the United States, has remained silent in the face of Turkish and regime advances.” No doubt Washington would prefer some face-saving accommodation, such as a choreographed YPG exit, which would avoid a battle.

“There may be several reasons,” Zaman continues. “For one, Turkey has always made it clear that it will not tolerate any YPG advances west of the Euphrates River, where Manbij lies. The YPG and its political affiliates were supposed to leave once the town was fully freed. The United States offered guarantees to that effect. But the Syrian Kurds did not leave, and the Manbij Military Council is widely viewed as a YPG front. … The deal between the regime and the SDF will surely reinforce critics' long-running claims that the YPG is colluding with the regime, but it gets Washington off the hook.”

Zaman suggests, however, that some creative choreography in defusing a confrontation in Manbij may provide a “template” for Raqqa. “A nagging problem in plans to overrun the jihadis’ so-called capital is the lack of adequate manpower. … Turkey’s offer to take Raqqa with the FSA is likely to be ignored because the US military planners remain unimpressed. … While the United States would never want to cooperate directly with the regime, any help it can get on Raqqa would clearly not be unwelcome. And as recent developments in Manbij have shown, with Russia pulling the strings, the SDF and the regime are capable of working together when need be. It may not be all that bad an outcome for Turkey, either, for the alternative, a deeper US footprint in alliance with the Kurds, is viewed by Ankara as the biggest threat of all.”

For the first time ever, Iraqi warplanes attacked IS forces inside Syria, and did so by coordinating with both the US and Syrian governments.

Ali Mamouri suggests that “there have been indications that the United States would like to give Iraq a role in the fight against IS in the Syrian territories.”

The Iraqi attack Feb. 24 occurred one day before the unannounced visit of Saudi Arabia’s Foreign Minister Adel al-Jubeir to Baghdad, the first visit by a senior Saudi official since 1990. The two events seem to be linked to a more assertive regional posture by Iraqi Prime Minister Haider al-Abadi.

Mamouri reports, “Abadi tasked the Iraqi intelligence apparatus with improving relations in the region.” He also wrote, “Saudi Arabia might be thinking of arrangements for the post-IS period and is seeking to extend its influence in Iraq to find a balance with the broad Iranian influence.”

Mamouri adds, “Rapprochement with Iraq comes in the context of the US administration's keenness on curtailing Iran's role in Iraq. … There is a joint vision among Iraq, Saudi Arabia and the United States to neutralize the role of Shiite militias affiliated with the PMU [Popular Mobilization Units], to prevent them from moving beyond Iraqi territories and advancing Iran’s agendas in the region. Last year, Abadi merged all the PMU militias into an official government security institution under his direct leadership and integrated Sunni militias into the PMU to create a political balance, ward off Iranian influence and prevent them from carrying out military missions outside the official framework of the Iraqi government. Although the PMU agreed to operate under Abadi's leadership, some Iran-affiliated militias did not hide their dissatisfaction with some of his policies, noting that they are not obliged to follow his orders beyond the Iraqi territories.”

With regard to Iraqi-Syrian coordination against IS, this column in February 2014 identified the need for “a new, regionally based mechanism to address counterterrorism taken up by those countries most affected by the rise of forces affiliated with al-Qaeda and jihadis, including Turkey, Iraq, Jordan, Syria and Lebanon. Such an effort, which would include regular meetings and intensive cooperation among the security heads of these five countries, could complement both the Geneva talks and international efforts to address the terrorist threat from foreign fighters. Over time, this dialogue could be expanded to bring in Iran and Saudi Arabia as well as other countries affected by the growing terrorist threat from Syrian-based jihadis.”