Did the US, Turkey reach understanding on Assad?

Turkey declares an end to Syrian military intervention; alarm over possible US military support to Gulf coalition in Yemen war. 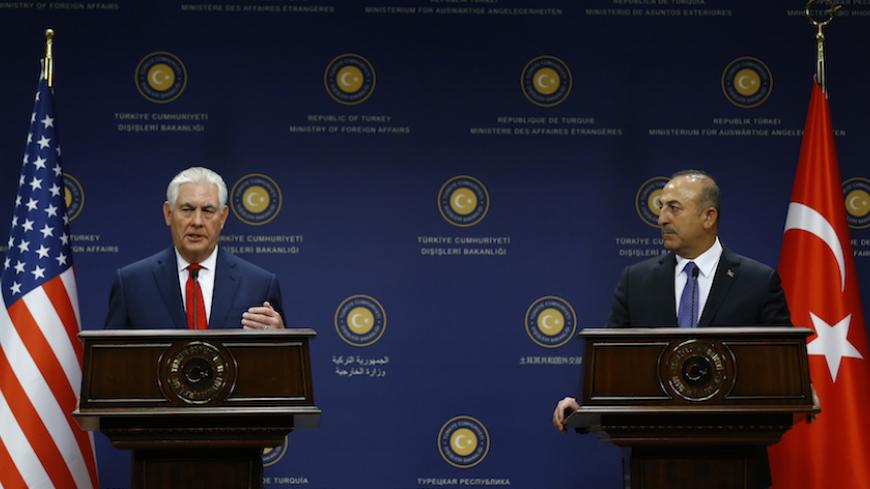 US backs off on Assad

Is it a coincidence that the Trump administration’s flurry of statements that it no longer actively seeks the departure of Syrian President Bashar al-Assad came during US Secretary of State Rex Tillerson’s visit to Turkey last week?

In a press availability with Turkish Foreign Minister Mevlut Cavusolglu on March 30, Tillerson said that Assad’s status “will be decided by the Syrian people.” Tillerson’s remarks echoed those of Nikki Haley, the US permanent representative to the United Nations, and Sean Spicer, the White House press secretary, that Assad’s departure is no longer a US priority.

The administration’s clarity on Assad allows a more realistic assessment of political and military options in Syria. In addition, the Turkish government announced the end of Operation Euphrates Shield on March 29, the day before Tillerson’s arrival, a sign that Ankara may be seeking face-saving alternatives for an off ramp in Syria.

Turkey’s “mission accomplished” pronouncement may mean that there will be no attack on Manbij, despite earlier threats from Ankara. If so, this will be a relief for US military planners. Al-Monitor has covered Turkey’s complications in seizing al-Bab and its missteps in Manbij, where US forces on the one hand, and Syrian and Russian forces on the other, deterred a Turkish assault.

Berzan Iso reports this week from Manbij, “Although Manbij declared self-government without coordinating with the Democratic Federal System of Northern Syria, its government is a replica of the models developed and implemented in the Kurdish-dominated Jazeera, Kobani and Afrin cantons. The fundamentals — the co-chair system, women’s rights, representation of different groups and social contract principles — are almost exactly the same; the only difference is the larger representation of Arabs, who make up the largest ethnic group in Manbij. The SDF is praised for securing social peace in the areas it liberated from IS, and the people have shown enormous support for self-government and the canton system, which is no doubt making Turkey uneasy.”

From all accounts, Tillerson’s visit to Turkey otherwise served to underscore, rather than diminish, the deepening crisis in US-Turkey relations. Amberin Zaman reports that in addition to Washington’s refusal to extradite Fethullah Gulen, the Muslim cleric Ankara accuses of orchestrating the July 2016 attempted coup, and the arrest in the United States last week of a senior executive one of Turkey’s largest banks for evading Iran sanctions, “nothing incenses Turkey as much as the US support for Syria’s Kurds. … In meetings with Turkish President Recep Tayyip Erdogan, Prime Minister Binali Yildirim and Foreign Minister Mevlut Cavusoglu, Tillerson is believed to have confirmed the administration’s decision to press ahead with plans to capture Raqqa, the Islamic State’s last remaining stronghold in Syria, with the help of the Kurdish-dominated Syrian Democratic Forces (SDF). Tillerson’s meeting with Erdogan lasted over two hours.”

The United States has tried to thread the needle by displaying solidarity with Turkey in its internal war on the Kurdistan Workers Party (PKK), while stressing the purely “tactical” nature of its partnership with the Syrian Democratic Forces (SDF), which are made up mostly of Syrian Kurdish People's Protection Units (YPG) fighters. For Turkey, the YPG is the Syrian extension of the PKK, which Ankara considers a terrorist organization. Zaman continues that “in an apparent bid to appease Turkey over its partnership with the YPG, the United States has remained largely silent about worsening rights abuses in the country, including the brutal treatment of the Turkish Kurds. Behind closed doors, US officials offer blithe assurances that the alliance with the YPG is purely tactical and that they will continue to help Turkey target PKK assets in Kurdish-controlled Iraqi Kurdistan.”

Zaman adds, “In a highly unusual move, Erdogan excluded US Ambassador to Ankara John Bass from his meeting with Tillerson and Cavusoglu, officials familiar with the participants confirmed on condition that their names be withheld. Bass, a highly regarded career diplomat, is counted as one of Turkey’s few passionate advocates in Washington. Brett McGurk, the US special envoy to the anti-IS coalition widely perceived in Ankara as a friend of the SDF, was also excluded from the meeting.”

The crisis in US-Turkey ties may get worse before it gets better, but introducing some realism about Assad’s fate may be a step toward an exit strategy for both Ankara and Washington in Syria. Semih Idiz has written that “having vilified Assad for years, Erdogan supporters are coming around to accepting now that Assad may be the lesser of two evils when compared with the PYD and the YPG,” and Zaman wrote earlier this month that “while the United States would never want to cooperate directly with the regime, any help it can get on Raqqa would clearly not be unwelcome. And as recent developments in Manbij have shown, with Russia pulling the strings, the SDF and the regime are capable of working together when need be. It may not be all that bad an outcome for Turkey, either, for the alternative, a deeper US footprint in alliance with the Kurds, is viewed by Ankara as the biggest threat of all.”

US proposal for Yemen provokes alarm

Laura Rozen reports that “some UN and US humanitarian officials have expressed alarm as the Trump administration considers whether to provide increased US logistical and intelligence support for an Emirati/Saudi coalition military operation to take the Red Sea port of Hodeidah from Yemen’s Houthi rebels.”

Rozen adds, “Some former US officials said they were concerned that the Trump administration might be debating decisions on the matter in an interagency group currently dominated by the military, and without senior staff appointed and representing dissenting views from, for instance, USAID, and State Department bureaus less sympathetic to Gulf allies’ points of view. Rather than supporting escalation of the two-year-old Saudi-led war in Yemen as a demonstration of alliance management, the US administration should be focused on how to get the parties back to negotiations to end the war, one official said. Yemen is also not the best venue for the Trump administration to demonstrate its intent to push back on malign Iranian actions in the region, he said.”

Julian Pecquet reports that bipartisan members of Congress are questioning the US rationale for escalating US military involvement in Yemen.

“When the administration announced new sanctions on Iran last month [February], then-national security adviser Michael Flynn declared that ‘Houthi forces that Iran has trained and armed have struck Emirati and Saudi vessels and threatened the United States and allied vessels transiting the Red Sea.’ And just this week, Central Command chief Joseph Votel told Congress that there are ‘vital interests at stake’ for the United States in the Gulf alliance's fight against the Houthis,” Pecquet writes.

“Such statements have alarmed lawmakers who fear the administration is laying the groundwork for greater US involvement in another sectarian conflict between Saudi and Iran-backed proxies,” Pecquet continues.

He adds, “Last year, [Connecticut Democratic Sen. Chris] Murphy banded together with Sens. Rand Paul, R-Ky., Mike Lee, R-Utah, and Al Franken, D-Minn., in an effort to withhold arms sales to Saudi Arabia amid accusations that the Gulf coalition was carelessly or deliberately bombing civilian targets in Yemen. Together they convinced more than a quarter of the Senate. Even lawmakers who support the Gulf coalition are wary of unchecked US escalation. Senate Foreign Relations Chairman Bob Corker, R-Tenn., made it clear he doesn't believe the Authorization for the Use of Military Force that Congress passed in 2001 to counter al-Qaeda would apply to the Houthis."