Is Manbij the latest Kurdish poke in Erdogan's eye?

Erdogan's plan to contain Kurds suffers a setback as Manbij on Syria's northern border with Turkey declares itself a self-governed canton. 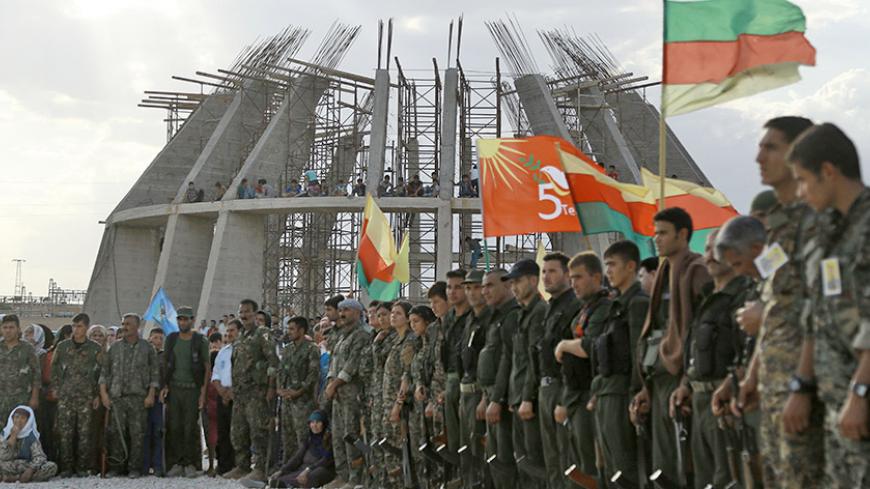 Members of the Syrian Democratic Forces (SDF) attend the funeral of eight fellow fighters who died during an assault against the Islamic State on the town of Manbij, in the Syrian Kurdish town of Kobani, on June 24, 2016. - DELIL SOULEIMAN/AFP/Getty Images

MANBIJ, Syria — As Turkish President Recep Tayyip Erdogan was declaring in February that after taking over al-Bab, Turkey would proceed to Manbij and then to Raqqa, Al-Monitor was meeting in Manbij with Adnan Abu Amjad, general commander of the Manbij Military Council.

The day of the meeting, the largely Kurdish, US-supported Syrian Democratic Forces (SDF) coalition west of Manbij was under heavy shelling by the Turkish army and the Free Syrian Army (FSA) groups Turkey supports. The United States was not responding to the attacks. When asked about the lack of reaction from the United States and the international coalition to the Turkish attacks, Abu Amjad said, “Our forces liberated seven villages from [the Islamic State (IS)] at al-Bab. The coalition wants us to withdraw to the town limits of Manbij because they say their agreement with Turkey covers only the town. But we don’t want to withdraw because the stability of Manbij depends on these villages.”

On March 2, the SDF handed over these villages to the Syrian regime’s border guards, who are under Russian control. This move prevented a possible clash with the Turkish army and allowed the people of Manbij to feel somewhat safer. Now, Manbij's boundaries are defended by two major global powers.

Turkey projected its progress in Syria based on US-Russian discord. But US Chairman of the Joint Chiefs of Staff Joseph Dunford and Russian Chief of Staff Gen. Valery Gerasimov met March 7 with their Turkish counterpart in Antalya and pointed out how erroneous Ankara’s calculations were. There is now a "Manbij thesis" in Syria that is based on “self-government and decentralization.” The Syrian constitutional draft submitted by Russia in Astana, Kazakhstan, seems to be based on the same, and so does the US approach.

Meanwhile, the 132-member Manbij Civilian Assembly assumed the town's governance and quietly set out to prepare the declaration of a fourth Kurdish canton in northern Syria. Zeynep Kender of the assembly told Al-Monitor, “We have been waiting for a long time to declare self-governance." Doing so before the United States and Russia reached a compatible view on Manbij's future would have been a major political and military folly, and would have made Manbij Turkey’s primary target.

On March 12, the Manbij Civilian Assembly declared self-governance for the canton and elected Arab civil engineer Ibrahim Kaftan and Kender, who is Kurdish, as its co-chairs.

Kaftan responded, “Sadly, Turkey has played a big role in deepening the Syria crisis. It should have been a part of the solution."

Erdogan told news media that the self-governance declaration reports were fiction and that the Kurds in Manbij "cannot take a step there without Turkey's approval."

Kaftan told Al-Monitor, “Erdogan doesn’t have the right to tell our people what to do or not. He has to respect the decisions of our people.”

Since the United States and Russia deactivated the Manbij front, questions have arisen about the future of the FSA militias that had been near Manbij participating in Turkey’s Operation Euphrates Shield. Kaftan said, “Turkey wants to use these militias against us by provoking their racist sentiments. We have no problems with our Syrian brothers participating in the operation. Our real problem is with the occupying power."

Erdogan says that more than 90% of the Manbij population is Arab, and that Kurds and other ethnic groups are outsiders. Kaftan, however, noted that there are no marginalized communities in Manbij and diverse groups live side by side.

The entire Manbij district, with all the villages administratively attached to it, had a population of 408,000, according to a 2004 census. It is a historical town where Arabs, Turkmens, Circassians, Armenians, Chechens and others live together. Until Manbij was liberated by the SDF in August, IS had occupied it for 2½ years.

Before heading to Manbij, Al-Monitor met with Fawzi Youssef, co-chair of the Democratic Federal System of Northern Syria (informally known as Rojava) Executive Council, in Qamishli. When asked about the position of the new canton in the federation, Youssef said that the decision was made by the people of Manbij and that the council hadn't yet received a request from them to join the federation.

The Manbij council's Kaftan told Al-Monitor, “Of course we would like to join the federation. I believe a federated system is the only way out for Syria."

Although Manbij declared self-government without coordinating with the Democratic Federal System of Northern Syria, its government is a replica of the models developed and implemented in the Kurdish-dominated Jazeera, Kobani and Afrin cantons. The fundamentals — the co-chair system, women’s rights, representation of different groups and social contract principles — are almost exactly the same; the only difference is the larger representation of Arabs, who make up the largest ethnic group in Manbij.

The SDF is praised for securing social peace in the areas it liberated from IS, and the people have shown enormous support for self-government and the canton system, which is no doubt making Turkey uneasy. 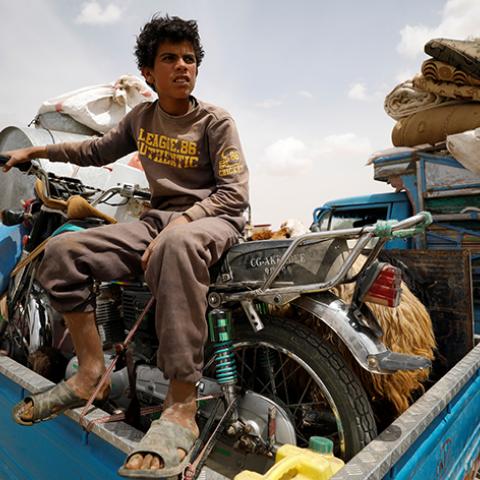 Civilians task themselves with administering IS-free areas of Raqqa