Tillerson leaves Ankara with no new enemies — or friends

The US secretary of state seems to have made little progress on his first official trip to Turkey, where Rex Tillerson is believed to have confirmed the administration’s decision to press ahead with plans to capture Raqqa with the help of the Kurdish-dominated Syrian Democratic Forces. 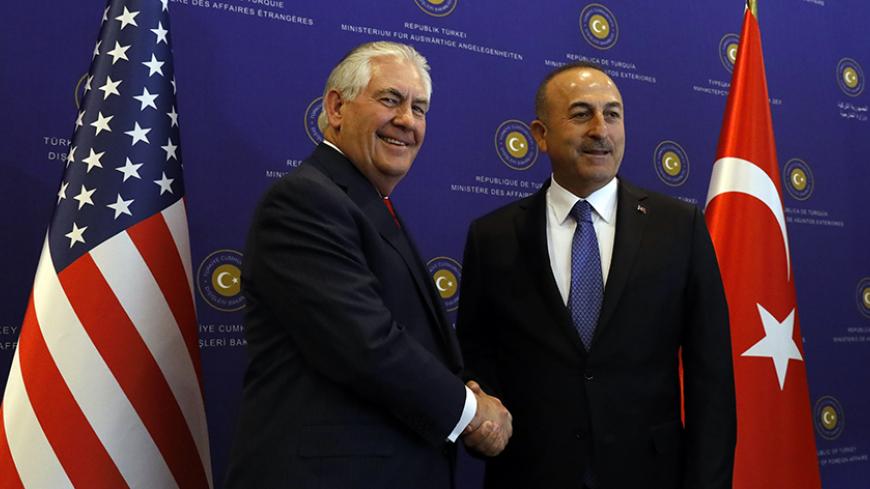 US Secretary of State Rex Tillerson completed his first official trip to Turkey since taking office, apparently without resolving any of the fundamental differences that have sunk relations between the two NATO allies to their weakest since the 2003 occupation of Iraq.

There are multiple sources of friction: Washington has so far refused to extradite Fethullah Gulen, the Muslim cleric Ankara accuses of engineering the failed July 15 coup. On Monday, a senior executive of one of Turkey’s largest state-owned banks was arrested in the United States on charges of conspiring to evade trade sanctions on Iran. Halkbank executive Mehmet Hakan Atilla is accused of plotting with Reza Zarrab, an Iranian-Turkish gold trader with close ties to the Turkish government who was arrested in Miami a year ago for similar offenses. Turkey called the arrests politically motivated.

But nothing incenses Turkey as much as the US support for Syria’s Kurds.

In meetings with Turkish President Recep Tayyip Erdogan, Prime Minister Binali Yildirim and Foreign Minister Mevlut Cavusoglu, Tillerson is believed to have confirmed the administration’s decision to press ahead with plans to capture Raqqa, the Islamic State’s last remaining stronghold in Syria, with the help of the Kurdish-dominated Syrian Democratic Forces (SDF). Tillerson’s meeting with Erdogan lasted over two hours.

"What we discussed today are options that are available to us. They are difficult options. Let me be very frank, it's not easy, they are difficult choices that have to be made," Tillerson told a joint news conference with Cavusoglu.

In a highly unusual move, Erdogan excluded the US Ambassador to Ankara John Bass from his meeting with Tillerson and Cavusoglu, officials familiar with the participants confirmed on condition that their names be withheld. Bass, a highly regarded career diplomat, is counted as one of Turkey’s few passionate advocates in Washington. Brett McGurk, the US special envoy to the anti-IS coalition widely perceived in Ankara as a friend of the SDF, was also excluded from the meeting.

Turkey is deeply opposed to the Pentagon’s deepening alliance with the group that has grown into Syria’s sharpest paramilitary force since it was founded two years ago.

The number of its ethnic Arab members is growing rapidly, but the SDF’s muscle comes from the People’s Protection Units (YPG), a Syrian Kurdish militia whose top leadership is drawn from the Kurdistan Workers Party (PKK). The PKK is fighting for self rule inside Turkey and is labeled a terror group by the Turkish government, the European Union and the United States alike. But while Turkey classifies the YPG as terrorists as well, the EU and the United States do not.

The ongoing squabbles about whether the YPG and the PKK are the same entity are poisoning ties and feeding anti-US feelings within the Turkish military and beyond. They are also further undermining Turkey’s frail democracy, which has been rapidly unraveling since the attempted coup.

In an apparent bid to appease Turkey over its partnership with the YPG, the United States has remained largely silent about worsening rights abuses in the country, including the brutal treatment of the Turkish Kurds. Behind closed doors, US officials offer blithe assurances that the alliance with the YPG is purely tactical and that they will continue to help Turkey target PKK assets in Kurdish-controlled Iraqi Kurdistan.

Tillerson met with no members of the opposition during his trip. In his joint news conference with Cavusoglu, Tillerson did not mention the more than a hundred Turkish journalists who are currently in prison, let alone the tens of thousands of other political prisoners.

Selahattin Demirtas, the co-chair of the Peoples’ Democratic Party, the country’s largest pro-Kurdish bloc, announced today that he was joining a hunger strike to protest prison conditions for thousands of fellow detainees. Demirtas has been behind bars since November on a slew of vague terror charges.