Syrian Kurds fear US sellout to Turkey on ‘safe zone’ 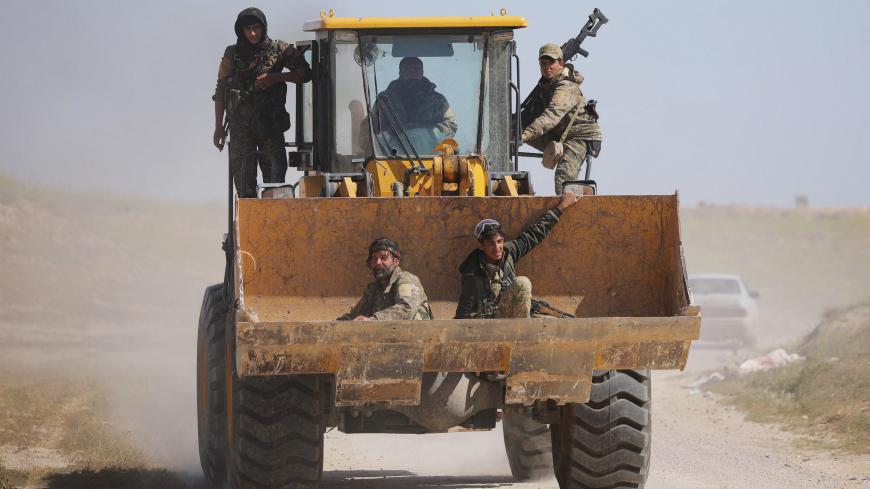 Fighters from the Syrian Democratic Forces (SDF) sit in the bucket of an excavator in the village of Baghouz, Deir Al Zor province, Syria March 20, 2019. - REUTERS/Rodi Said

US Syria envoy James Jeffrey said the United States is willing to consider a safe zone inside Syria on the Turkish border that would include a limited number of Turkish forces but that is free of the People’s Protection Units (YPG), the Kurdish militia that makes up the bulk of the Syrian Democratic Forces (SDF), the primary US on-the-ground partner in the battle against Islamic State.

Jeffrey added that the YPG is “the PKK's offshoot,” referring to the Kurdistan Workers Party, which Turkey, the United States and the European Union all consider a terrorist organization.

The PKK-YPG link has been mostly in the category of "dare not speak its name," given the effectiveness of the SDF in the US-led coalition defeat of the Islamic State (IS), also known as ISIS and by its Arabic initials Daesh.

Turkish President Recep Tayyip Erdogan, for his part, has never held back regarding the connection between the YPG (and its political arm the Democratic Union Party, or PYD) and IS, saying in Moscow last week, “Just like Daesh was great threat, the YPG/PYD is a threat of the same nature. With the elimination of Daesh, similar organizations and threats must also be eliminated.”

Jeffrey’s nod to Turkish concerns has alarmed Syrian Kurds, who were recognized by Acting Secretary of Defense Patrick Shanahan on March 23 for leading “the fight against ISIS in Syria” with US and Coalition Forces.

An SDF leader, speaking on condition of anonymity, told Amberin Zaman, “We regard the presence of Turkish troops on our soil as extremely problematic and have made our position clear.” Zaman reported last month that Syrian Kurdish leaders would prefer Russian or Syrian troops rather than Turkish forces in Manbij, the Syrian city near the Turkish border that which has been an experiment in Kurdish-led administration and joint US-Turkish patrols.

Acting Assistant Secretary of State David Satterfield told reporters April 15 that Washington is not bailing on the Kurds and that US policy is to assure that “those who partnered with us, died for us in the fight against ISIS are not threatened, that a vacuum is not created in northeast Syria" that winds up being filled by "Russian, Iranian and Syrian regime forces."

Jeffrey will soon travel to Turkey to try to iron out the details of its safe-zone proposal, which might not go far enough, from Ankara’s perspective. Turkish presidential spokesman Ibrahim Kalin said April 16, "The US needs to have a change of course there because we don't need the PYD/YPG to establish peace and security in any part of Syria."

The PYD/YPG is already talking with Damascus, and we can probably expect that channel to heat up.

The Trump administration, hoping to stave off a Turkish attack on its former allies, may find it difficult to keep up with trends leading to an eventual accommodation between Ankara and Damascus, as we have been reporting here.

Like the United States, Russia and Iran also don’t want a Turkish attack on the Kurds, although they are taking a different diplomatic tack.

Last week Putin said Erdogan had agreed to address next steps for a political settlement in Syria, under UN Security Council Resolution 2254,“in coordination with the Syrian government.”

Iranian Foreign Minister Mohammad Javad Zarif, who met with Syrian President Bashar al-Assad in Damascus the day before meeting with Erdogan in Ankara on April 17, said, “The best way to protect security of all the regional states is deployment of the Syrian army at the border with Turkey and ensuring prevention of any terrorist move against the Turkish government and people from Syria.”

Representatives from Russia, Turkey and Iran will hold the 12th round of Astana talks on Syria in Nur-Sultan, the recently renamed capital of Kazakhstan next week, with observers from Jordan and the United Nations attending.

Hamidreza Azizi points out, “Iran is apparently trying to kill two birds with one stone, preventing Turkey from expanding the area under its control in Syria as a result of a new military operation, while minimizing American influence by helping the Assad government reestablish its rule over Syria’s eastern and northeastern regions.”

Asked by Laura Rozen this week if Turkey’s purchase of the S-400 Russian missile defense system was a “done deal,” a senior Turkish official answered “yes and no.”

The S-400 is more kindling on the barely contained brushfire in US-Turkey relations. As we reported here last week, the Pentagon considers Turkey’s acquisition of the S-400 a “threat to the F-35 program and the safety of our NATO allies.” Congressional leaders have threatened to end the sale of US F-35 fighter jets to Turkey and impose sanctions under the Countering America’s Adversaries Through Sanctions Act if the deal goes ahead.

Erdogan has declared the S-400 a "done deal" and is unlikely to stiff Putin, given their expanding relationship, as Semih Idiz explains.

Nonetheless, Washington and Ankara want to control the blaze before it gets any worse. Turkish Defense Minister Hulusi Akar assured US interlocutors in Washington this week that if both the S-400 and F-35 sales proceed, Turkey can be trusted to keep them separate and not jeopardize NATO systems. There was also talk of Turkey housing the Russian system in either Azerbaijan or Qatar, and maybe for there to be a transfer of US Patriot technology, as a means for both sides to save face and not upend the relationship further.

Kalin, also in Washington, told reporters on April 16 that “we wouldn't want to have our F-35 program jeopardized in any way by the S-400 or any other system." The Turkish presidential spokesman added that Turkey’s proposal to establish a technical committee under NATO auspices to examine the deal, which had previously been rejected by the United States, “is still on the table.”

Erdogan might be banking on his personal relationship with his US counterpart, Donald Trump, to avert both sanctions and a further meltdown between NATO allies, if the S-400 deal goes forward as planned. Trump met April 15 with Turkish Finance Minister Berat Albayrak, who is also Erdogan's son-in-law, at the White House. Albayrak said he conveyed “the greetings and messages of our president,” and said that Trump “listened in a very reasonable way with a positive understanding to the process regarding Turkey’s needs for the S-400s.”

Following the meeting, Kalin said, “Of course we will expect President Trump to use his power for a waiver” if Turkey is hit with sanctions over the S-400. Asked if Trump said he would issue a waiver, Kalin answered, "I cannot say that he did. This is a message we are conveying.”

The catch may be that the US president’s waiver authority may be constrained in this case, as Jack Detsch explains, even if Trump was so inclined.

US-Turkish relations are a priority for both countries. Trump and Albayrak also discussed a renewal of a waiver for Turkey from US sanctions on the purchase of Iranian oil when the present waiver expires next month, and an expansion of bilateral trade from $20 billion to $75 billion.

Akar, trying to work a compromise to stop the bleeding over the S-400, lamented to his Washington audience this week that “you don't trust us as much as Russians trust us.”

Kadri Gursel concludes that the S-400 crisis “epitomizes Turkey’s break with Western geopolitics, [and] its resentment and mistrust toward the United States,” in the context of the defeat of Erdogan’s Justice and Development Party (AKP) in recent local elections.