Can US convince Turkey to undo 'done deal' with Russia?

Although there are some signs of warming between the United States and Turkey over the situation in northeast Syria, many in Ankara feel it is too little, too late. 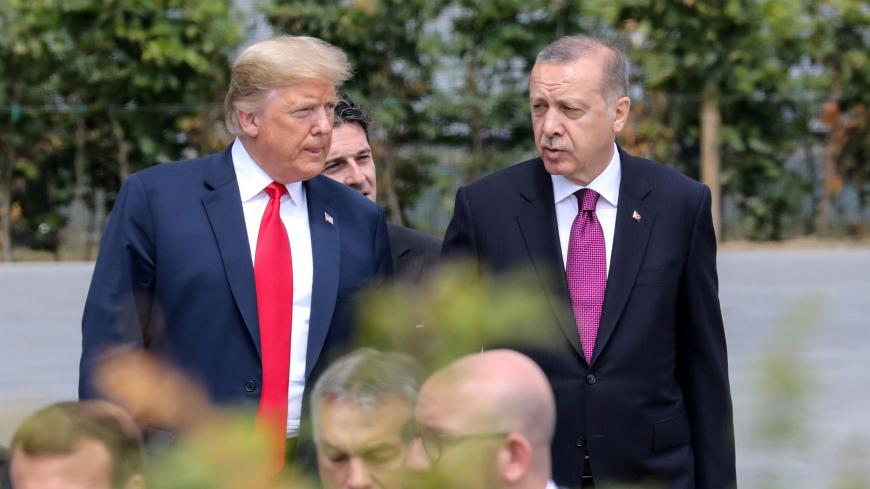 US President Donald Trump speaks with Turkey's President Recep Tayyip Erdogan ahead of the opening ceremony of the NATO summit at NATO headquarters in Brussels, Belgium, July 11, 2018. - Ludovic Marin/Pool via REUTERS

The United States is getting ready to ask Syrian Kurds to allow Turkish forces to deploy on the Kurdish side of the Syrian border. It's a move designed to appease Turkey, which has national security concerns regarding the autonomous Kurdish region in northeastern Syria — but the move may not go far enough to please Ankara.

In 2017, I wrote that Turkish President Recep Tayyip Erdogan could not simultaneously manage Washington and Moscow, and that he would eventually be squeezed between them. This is precisely the conundrum now with the controversy over Turkey's desire to purchase both Russia's S-400 anti-aircraft missile system and US F-35 jets. Washington says that if Turkey gets both systems, Russia would gain access to US technology.

Earlier this month, Erdogan declared the S-400 procurement a “done deal." He said, "Those who tell us to give up our plans … do not know us."

Less than a week later, Ankara launched a full-fledged “invasion” of Washington with a multitude of senior teams for warm dialogues with US decision-makers. Mutual reconciliatory messages began to circulate, both on the S-400 deal and especially on the idea of setting up a buffer zone in northeast Syria along the border with Turkey.

On April 16, Turkey's presidential spokesman Ibrahim Kalin told reporters at the Turkish Embassy in Washington, "Our proposal to establish a technical committee under the NATO umbrella is still on the table. We are waiting to hear from our US colleagues and from NATO, because we wouldn't want to have our F-35 program jeopardized in any way by the S-400 or any other system."

A government source that works on security affairs speaking to Al-Monitor on condition of anonymity referred to meetings in Washington and said, “Hawks say it's impossible for Ankara to give up the S-400 deal, and therefore the United States must clamp on sanctions immediately. Doves say, ‘Ankara is still trying to find a compromise and is open to various formulas.'" According to the general opinion in Ankara, although the doves had made some progress in recent days for a compromise with Turkey — one that has increasing confidence in the personal efforts of US President Donald Trump — an atmosphere of solid confidence that would undo the conundrum with Washington on S-400 and F-35 matters is not yet there.

Defense analyst Arda Mevlutoglu said the S-400 is not really a technical issue, but rather an overly politicized matter. It is a fully crystallized version of the growing crisis of confidence between Turkey and the Western security bloc.

“The fate of the S-400s will be determined by the power deals at the table and hard-line diplomacy," Mevlutoglu told Al-Monitor. "At one point, as an intermediate formula, there was a rumor of basing S-400s in northern Cyprus — far from Malatya, where F-35s would be based. But I don't think such formulas are workable. Also, don’t forget Moscow is part of the issue. Ankara will take the compromise reached with Washington to Moscow and try get the Kremlin’s blessing.”

I believe that the most crucial issue, which seems to have been overlooked in negotiations in Washington, is what concessions Ankara would have to offer Moscow to persuade it to accept a formula the United States agrees to.

Perhaps US decision-makers should start thinking about this.

It's no secret that Ankara is trying to achieve a balance by possibly procuring American Patriot missile systems as a complement to the S-400. We also know that Erdogan’s son-in-law, Berat Albayrak — who is his most trusted Cabinet member and whose name has been mentioned as the next foreign minister — met in Washington with the CEO of Raytheon, which manufactures the Patriot. We also know that Turkish Defense Minister Hulusi Akar also met with Raytheon officials.

Moscow is assured by Ankara’s commitment to the S-400 purchase. Russian presidential spokesman Dmitry Peskov said in a TV program April 16 there has been tremendous pressure on Turkey to give up on S-400s. He added: “The number of countries that act independently on their own interests is very few; Russia and Turkey are among them. Really, there is unprecedented pressure. We appreciate President Erdogan’s firm and determined stand.”

It's clear the Kremlin has no worries about promises made by Erdogan.

According to the same source, Turkey walked into a “short-term trap” and instead of trying to manage the S-400 crisis, it is trying to form policy based on “momentary expectations and rumors.”

“The basic factor that determines Ankara’s course is the personal political future of Erdogan," the source told Al-Monitor. "Putin is the person who best understands Erdogan. The personal relationship between Putin and Erdogan is one of the most basic parameters of the S-400 crisis. I think Washington doesn’t pay too much attention to this parameter.”

Another issue Washington doesn’t really understand is the interdependency between Ankara and Moscow on northeast Syria. Last week there were optimistic comments that Washington is very close to agreeing with Turkey on setting up a buffer zone along the border.

As Al-Monitor’s Amberin Zaman first reported last week, Washington was looking to pressure the Kurdish People’s Protection Units (YPG) to withdraw to the south and allow Turkey to set up its buffer zone in northern Syria.

Moscow, Damascus and Tehran all have a deep desire to have a say in Syria's future, especially after Trump’s surprise withdrawal announcement in December. Turks are very much aware and concerned that US thinking changes day by day.

In short, Ankara’s S-400 deal and US-Turkey cooperation in northeast Syria have already been taken hostage by Moscow.