As Turkey drifts away from the US, will Russia give it what it wants?

Both Turkish and Russian analysts believe Putin has been successful in using President Erdogan to drive a wedge between NATO members. 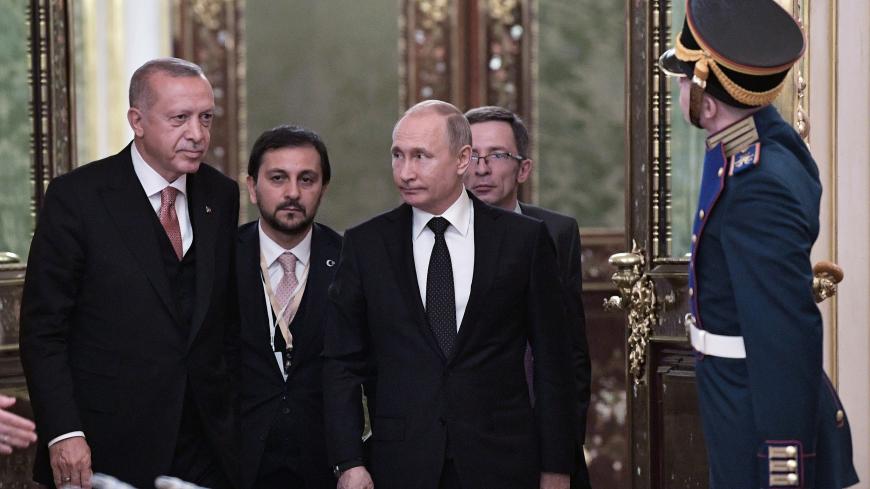 President Recep Tayyip Erdogan’s reliance on Russia is growing as Turkey’s ties with the United States deteriorate and move toward what might be a breakup of historic proportions.

Turkey’s purchase of Russian-made S-400 anti-missile defense systems has turned into the main issue clouding these ties, although there is no shortage of differences in other areas.

Washington is threatening sanctions and other punitive measures, like withholding the delivery of modern F-35 fighter jets to Turkey, if Ankara goes ahead with the Russian deal.

Turkish officials, however, remain defiant and continue to underline that Turkey has alternatives to the United States.

Erdogan’s chief adviser, Gulnur Aybet, spelled out recently what the main alternative was.

“If the United States continues to approach Turkey with a zero-sum game … then the doors, which are currently open for the future of relations, could turn toward another partner, and that is Russia,” Aybet said during a panel discussion in Washington.

Erdogan, for his part, reassured Russian President Vladimir Putin — when the two met in Moscow April 8 — that Turkey would not go back on its decision to purchase the S-400s.

Putin responded by declaring that more modern military hardware could be supplied to Turkey once the S-400 deal is finalized.

While returning to Turkey from Moscow, Erdogan told reporters on his plane that the date of the delivery of the S-400s, planned for July, might even be brought forward.

Such talk is music to Moscow's ears, as Russian officials shower Erdogan with praise.

“The number of countries that can act independently can be counted on the fingers of the hand. Russia and Turkey are in this category,” Kremlin spokesman Dmitry Peskov told state-owned Russia-1 channel on April 15.

“We are pleased with the firm position President Erdogan is maintaining,” he added.

Russian analyst Vladimir Frolov, however, has a different explanation for Russia’s satisfaction with Erdogan.

“Moscow played its hand brilliantly, using Erdogan’s distrust of Washington to ‘bait and hook him.’ Now Russia has only to reel him in,” Frolov wrote in The Moscow Times.

Referring to Erdogan as “our man in NATO,” Frolov argued that “Ankara’s desire to buck NATO was … arguably a more significant foreign policy coup [for Russia] than saving the regime of Syrian President Bashar al-Assad.”

“Breaking up NATO from inside and walking away with $2.5 billion to boot — that’s quite a priceless catch,” Frolov added, referring to the cost of the S-400s for Ankara.

Clearly aware of what it has gained from Turkey so far, Moscow continues to strum the right chords for Ankara, albeit with significant caveats.

Two days after Erdogan and Putin met, Peskov told reporters in Moscow that some components of the S-400 system could be produced in Turkey.

He was clearly trying to furnish the Turkish side with some corroboration for Ankara’s claim that the S-400 deal involves the transfer of technology to Turkey.

What he gave with one hand, though, he took away with the other.

"We are not talking about the complete production chain, as it is a new type of weapon. But the production of some components can be organized,” Peskov said.

Peskov’s caveat undermines Ankara’s claim regarding the transfer of technology.

Many military analysts argue that Moscow’s trust in Ankara — which remains a NATO member — is not such that it can reliably transfer its sensitive technology to Turkey.

“It’s not me that says this but Kremlin’s spokesman Peskov, who only two days ago repeated what many Russian officials have said before,” Dilek wrote in the news site Yeni Cag.

He was referring to Peskov’s qualified remarks about the possibility of producing some S-400 components in Turkey.

Soner Cagaptay, a senior fellow at the Washington Institute for Near East Policy, believes that Erdogan has left himself no room to pull back from the S-400 deal.

“[Putin] is keenly aware that Turkey’s purchase of the S-400 system will lead to a rupture between Ankara and Washington, creating a fissure inside NATO," Cagaptay argued in an article for The Hill. "Putin will not allow Erdogan to cancel the S-400 deal without extracting a pound of flesh from him.”

Meanwhile, pro-government Turkish analysts have started touting the idea that Ankara will turn to Russia for advanced fighter jets if Washington refuses to deliver the F-35s. However, if this also becomes the official line, it will further aggravate Turkey’s ties with the United States.

Al-Monitor’s Laura Rozen reported this week that Ankara is seeking a formula with the United States to secure the delivery of the F-35s, even if it goes ahead with the S-400 deal.

This shows that Ankara is concerned about being cut out of the F-35 program, whose production it is also involved in.

Retired Brig. Gen. Ali Er underlined another security risk for Turkey related to the S-400s. In an interview with daily Cumhuriyet, Er pointed to NATO’s advanced Ballistic Missile Defense (BMD) radar system in Kurecik, near the eastern city of Malatya in Turkey.

The arrival of the S-400s could result in NATO withdrawing this system, according to Er, “because the missile shield was set up against ballistic missile threats from Russia and Iran.”

Turkey denies that this system was set up against Russia and Iran, and says it is a defense system against missile threats from the Middle East. It was nevertheless keen to join the BMD program knowing full well who the real target was.

If NATO were to shut down the Kurecik radar, Ankara could be left with no choice but to turn to Russia for a matching radar system, seeing as it does not have the capability to produce this itself.

This is what makes Ankara’s S-400 deal inexplicable, according to Er. “I can find no economic explanation, let alone a military or political one, for why Turkey would engage itself to somewhere else when it can enjoy the fruits of NATO’s defense resources,” he argued.

The wisdom of turning to Russia is being debated by other Turkish analysts, too. Many argue that the United States may have pushed Turkey to this position, but they are still not sure that Ankara’s reliance on Moscow is justified.

Despite the growing economic ties between Turkey and Russia, and much talk about a strategic relationship in the making, the sides are at odds over a host of critical issues.

For example, while the sides have cooperated to a degree in Syria, they do not see eye to eye on Assad’s future or Turkey’s ultimate fear of seeing the Syrian Kurds getting a say — let alone some degree of autonomy — in a new Syria.

Moscow is also opposed to a new Turkish military incursion into northern Syria, and says Turkey must turn over to Damascus regions it captured from the Islamic State and the Kurdish People's Protection Units (YPG).

Erdogan’s recent talks in Moscow also showed that Russia is not fully in the bag for Turkey. Erdogan could not secure what he wanted in two areas that he values: namely visa-free travel for Turks going to Russia and a reduction in the price of Russian gas.

According to retired Ambassador Selim Kuneralp, Erdogan’s desire to turn to Russia as a counterbalance to its deteriorating ties with the United States defies the logic of history and the realities that govern the region.

“Russia can’t replace America or NATO for Turkey because the two countries do not have shared strategic interests,” Kuneralp told Al-Monitor.

“They do not agree on an issue of vital national importance to Turkey, like Cyprus, or on many issues pertaining to the Balkans, the Caucasus or Syria,” Kuneralp said.

“The past 300 years have been marked mostly by hostility between Turkey and Russia,” he added, underscoring the fact that even today Armenia’s border is protected by Russian forces against Turkey.

“The only shared interest between Erdogan and Putin seems to be their hatred of the US and Europe,” Kuneralp said.

Retired Brig. Gen. Naim Baburoglu has no doubts as to who is the happiest person in this overall picture. “Putin … is so happy that he might even give the S-400s as a grant to Turkey,” Baburoglu wrote in an article for the news site Gercek Gundem.