The US-Turkish relationship is in such a bad state that the sides can’t even agree on what was discussed during high-level bilateral talks. 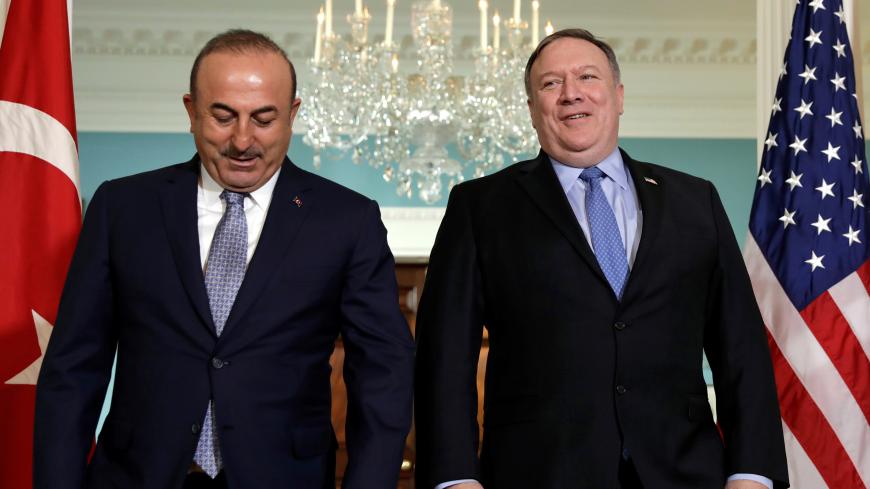 The alliance between Turkey and the United States, in force since President Harry Truman unfolded his eponymous doctrine in 1947, is heading into the realm of the unknown.

With President Recep Tayyip Erdogan’s refusal to change his foreign policy orientation, and Washington’s apparent determination to stick to its guns over contentious issues with Ankara, the nearly 70-year strategic relationship is on a collision course.

The relationship is in such a bad state that the sides can’t even agree on what was discussed during recent high-level bilateral talks. This was the case following the meeting between Turkish Foreign Minister Mevlut Cavusoglu and Secretary of State Mike Pompeo in Washington on April 3.

State Department deputy spokesman Robert Palladino said in a statement after the talks that Pompeo had warned Cavusoglu of “the potentially devastating consequences of unilateral Turkish military action” in northern Syria.

This was in response to continuing threats by Erdogan to launch a military operation east of the Euphrates River against the US-supported People’s Protection Units (YPG), which Ankara says is a Kurdish terrorist organization that threatens Turkey.

According to Palladino, Pompeo also called for the swift resolution of cases involving unjustly detained US citizens in Turkey, and conveyed his concerns regarding Turkey’s purchase of Russian S-400 anti-missile defense systems.

Turkish Foreign Ministry spokesman Hami Aksoy responded to Palladino by stating that such topics had not been discussed by Cavusoglu and Pompeo.

Aksoy conveyed in a written statement that the State Department's readout was "obviously prepared before the meeting" between Cavusoglu and Pompeo, and that it "not only fails to reflect the content of the meeting, but also contains matters that were not even raised during the said meeting."

Pompeo personally rejected Aksoy’s rebuttal. “I reread the readout of our meeting. Spot on. Stand by every word of it," Pompeo told reporters in Washington.

Aksoy did not specify which part of the Palladino statement Ankara disagreed with. It is thought that he was referring to an alleged warning regarding “potentially devastating consequences” if Turkey launched an operation against the YPG in northern Syria.

This is only one of the contentious issues between the sides. The dispute over the S-400s, however, is presently the highest item on the agenda.

Erdogan remains determined to go ahead with the S-400 deal, despite strong objections from Washington.

US threats of punitive countermeasures and the imposition of sanctions have not swayed him either. They appear, instead, to have added to his resolve not to bow to what Turkish officials see as American attempts to browbeat Turkey.

Erdogan repeated his position after meeting on April 8 with President Vladimir Putin in Moscow, where he underlined once again that the S-400 deal was done and would not be revoked.

Erdogan was openly defying US Vice President Mike Pence, who warned Turkey on the very day of the Cavusoglu-Pompeo talks that Ankara had to decide if it belongs in NATO or not.

"Turkey must choose," Pence said at a NATO anniversary event in Brussels. "Does it want to remain a critical partner in the most successful military alliance in the history of the world, or does it want to risk the security of that partnership by making such reckless decisions that undermine our alliance?"

Pence said that Turkey could be expelled from the F-35 Joint Strike Fighter project and that this could cripple Turkish companies making parts for the state-of-the-art fighter jet.

Turkish Vice President Fuat Oktay tried to turn the tables on Pence. “The United States must choose," Oktay said over Twitter. "Does it want to remain Turkey’s ally or risk our friendship by joining forces with terrorists to undermine its NATO ally’s defense against its enemies?” (The latter is a reference to Washington’s support for the YPG.)

Washington says Turkey’s deployment of S-400 systems will pose a threat to the F-35s. It also argues that it offered Patriot missiles to Turkey at premium prices but that Turkey rejected the offer.

The Turkish side counters by saying that Turkey applied for Patriot systems 10 years ago but made no headway, which forced it to turn to Russia to meet its urgent air defense needs.

Addressing the Atlantic Council in Washington on April 3, Cavusoglu proposed a bilateral Turkish-US panel that would reassure the American side regarding its concerns over Turkey’s purchase of the Russian air defense system. Washington promptly rejected the proposal.

The US Congress is also intensifying pressure on Ankara. In a letter to The New York Times, influential senators Jim Inhofe, Jack Reed, Jim Risch and Bob Menendez had dire warnings for Turkey.

“The choice made by President Recep Tayyip Erdogan of Turkey will have profound consequences for his country’s place in the world, its relationship with the United States and its standing in NATO,” the senators said.

The senators added that if Ankara goes ahead with the S-400 deal, Washington will impose sanctions “that will hit Turkey’s economy hard.”

“Further, no F-35s will ever reach Turkish soil. And Turkish participation in the F-35 program, including manufacturing parts, repairing and servicing the fighters, will be terminated,” they added, saying that the $1.2 billion Turkey invested in this program “will be squandered.”

Reuters reported last week that the Pentagon has already suspended deliveries of some F-35-related equipment to Turkey because of its position regarding the S-400s.

Turkey, however, does not want to harm its burgeoning ties with Russia, whom it has come to rely on to counter its deteriorating ties with the United States and Europe.

Pro-government commentator Hasan Basri Yalcin's column in the daily Sabah reflected this lack of confidence in the United States.

“Let’s assume that Turkey is influenced by these threats [from Washington] and gives up on the S-400s," Yalcin wrote. "A serious crisis of confidence will arise with Russia.”

He added that "the Patriots will not come even if we do not buy the S-400s. As to what will happen to the F-35s, only God knows. Who will guarantee the delivery of the F-35s even if Turkey considers all the risks and gives up on the S-400s?"

“When the S-400s are purchased we will at least have these even if America does not give us the F-35s,” Yalcin argued.

Also reflecting the mood in Ankara, Erdogan’s chief adviser, Gulnur Aybet, accused the United States of playing “a zero-sum game” with Turkey over the S-400 issue.

“If the United States continues to approach Turkey with a zero-sum game, as it is doing today, then the doors which are currently open for the future of relations [between the two countries] could turn toward another partner, and that is Russia,” Aybet warned during a panel discussion in Washington on April 10.

“The list of problems between the two countries awaiting resolution is quite long, and if some of these are not managed well they could result in permanent damage,” Ozcan argued in the daily Milliyet.

He pointed to Syria as an example, where the sides have “asymmetrical and incompatible expectations … which are not likely to be resolved if current positions persist.”

New problems between Ankara and Washington are likely to include Turkey’s refusal to comply with US sanctions against Iran, Venezuela and Russia.

Meanwhile, Turkish Finance Minister Berat Albayrak will be in Washington this week for the G-20 meeting of finance ministers, as well as meetings of the World Bank and the International Monetary Fund.

He will try and convince his interlocutors that Turkey is a safe bet for investors, despite its current economic woes. Everyone is aware, however, that the state of Turkish-American relations will also have an important bearing on Turkey’s economy.

Meanwhile, Trump’s threat in January to "devastate Turkey economically" if it attacks YPG forces in Syria has left a bitter taste in mouths in Ankara, especially after Washington displayed its ability to shake the Turkish economy over the pastor Andrew Brunson incident.

How these issues will be resolved in a manner that salvages what is left of the once strategic Turkish-American relationship is anyone’s guess at this stage.