Is Erdogan’s trust in Trump in the S-400/F-35 standoff misplaced?

Turkish government officials believe that if Trump was not hamstrung by Congress and the Pentagon, he and Erdogan would have solved this matter by now. 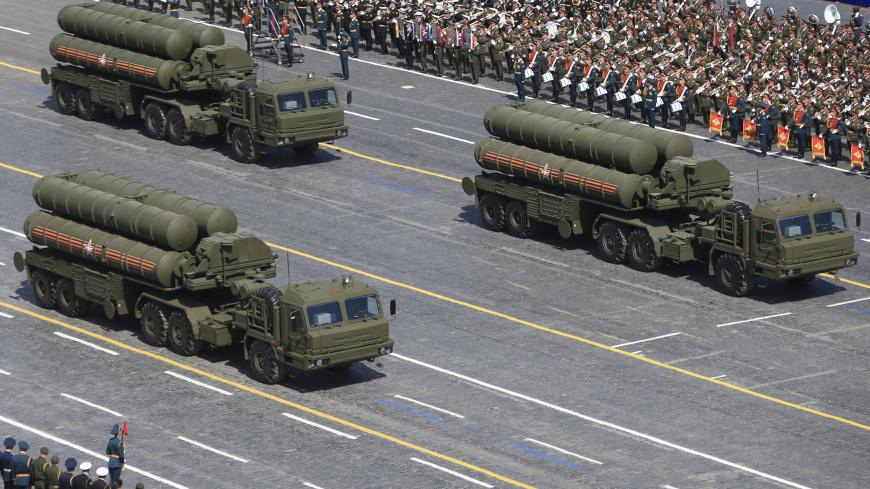 The debacle over Istanbul’s mayoral elections has added further urgency to Ankara’s need to resolve differences with the United States over its purchase of Russian-made S-400 missile defense systems.

Washington is threatening to withhold the delivery of state-of-the-art F-35 fighter jets to Turkey if it goes ahead with the deal. It is also threatening to impose sanctions under the Countering America’s Adversaries Through Sanctions Act.

The annulment of the March 31 municipal elections in Istanbul, which President Recep Tayyip Erdogan’s Justice and Development Party lost, has already hit Turkey’s crisis-ridden economy, sending the Turkish lira into a fresh nosedive against the dollar.

Any US sanctions and other punitive measures over the S-400 affair will only make matters worse, causing more economic turmoil, which Erdogan can ill afford.

Never one to give in to pressure, though, Erdogan is clinging to his position and saying the S-400 deal will not be revoked. He clearly does not want to upset Russian President Vladimir Putin, on whom Erdogan is relying to counterbalance Turkey’s worsening ties with the West.

Rather than try to calm the situation, Erdogan is stoking the fire by saying that the S-400s could be in Turkey by July, and possibly even earlier.

Meanwhile, Ankara continues to insist that Turkey will not bow to US pressures under any circumstances. Turkish Vice President Fuat Oktay reiterated this May 7 during a television interview when he said Turkish officials will “not surrender to anyone’s Congress.”

He was referring to the US Congress, which wants sanctions to be slapped on Ankara over its S-400 purchase and for the delivery of F-35s to be withheld.

Washington argues that the S-400 and F-35 are advanced systems designed to listen in on each other, and cannot therefore be deployed together without compromising NATO’s security.

Turkey rejects this and argues that it needs the S-400s for its own security. It says it was forced into buying these systems after wasting a decade trying to purchase Patriot missiles from the United States.

It is, however, offering assurances that the S-400s will pose no threat to NATO assets, and has proposed the setting up of a Turkish-US working group to verify this. The offer has been rejected by Washington.

US Vice President Mike Pence warned in April that Turkey could not have it both ways. “Turkey’s purchase of a $2.5 billion S-400 anti-aircraft missile system from Russia poses great danger to NATO and to the strength of this alliance," Pence said during a speech on the occasion of NATO’s 70th anniversary.

“If Turkey completes its purchase of the Russian S-400 missile system, Turkey risks expulsion from the joint F-35 program, which will harm not just Turkey’s defense capacity, but it may cripple many of the Turkish component manufacturers that supply that program,” he added.

This remains Washington’s position and was underlined again by Acting US Defense Secretary Patrick Shanahan a day before Oktay’s comments. "If Turkey decides that the S-400 is a decision they want to go forward with, then we have to move work out of Turkey," Shanahan said.

The recent flurry of high level diplomatic activity between Ankara and Washington, and the phone call Erdogan held with President Donald Trump on April 29 shows, however, that Ankara is more worried about US threats than it is letting on.

Foreign Minister Mevlut Cavusoglu, Defense Minister Hulusi Akar, Finance Minister Berat Albayrak and Erdogan’s principal adviser, Ibrahim Kalin, are trying desperately to convince Washington that Ankara’s purchase of the S-400 is not a move against the United States or NATO and should not be a pretext for withholding the delivery of the F-35.

Ankara is due to receive up to 100 F-35s, which the Turkish air force is counting on for the next decade at least.

Akar said during a television interview May 3, “There is no clause in [the NATO] partnership saying 'you will be excluded if you buy S-400s.'” He said, “Excluding us just because any one country wants to do so would not be in line with justice, laws or rights. This should not happen."

Meanwhile, Erdogan’s acolytes in the media are arguing that the S-400 purchase is not a sign that Turkey is drifting away from NATO.

“Turkey is and always will be a NATO member. It is a strong country in the alliance, and it is impossible to imagine Ankara acting against NATO's interests,” wrote Nagehan Alci in the pro-government daily Sabah.

“However, Turkey doesn't want to be ruled by the United States. It is a big country and wants the freedom to engage in relations with as many large powers as possible,” she added, saying it was time for Washington “to set aside its Cold War mindset.”

The bottom line is that Turkey wants the S-400 and the F-35 and is seeking a formula that will enable it to have its cake and eat it too.

The only means it has in its arsenal to try to achieve this, though, appears to be its belief that the F-35 program will collapse without Turkey’s participation, and a belief that Trump will weigh in and deliver what Ankara wants.

Shanahan’s remarks — which came after Erdogan spoke — show, however, that Erdogan is not getting through to Washington.

This leaves Ankara with only one option, namely a reliance on an executive intervention by Trump to overcome opposition from Congress and the Pentagon to the delivery of the F-35 to Turkey.

Turkish government officials have been suggesting for some time that if Trump was not hamstrung by Congress and the Pentagon, he and Erdogan would have solved this matter by now.

Erdogan son-in-law and Finance Minister Berat Albayrak, who was received in the Oval Office in April — following an intervention by Trump son-in-law Jared Kushner — was also optimistic about a Trump intervention.

Albayrak told reporters after the meeting that he would be reporting back to Erdogan on the “positive understanding” he detected from Trump regarding Turkey’s needs for the S-400s.

Reuters quoted Kalin in April as saying he had heard Trump pledge in a phone call with Erdogan that he would work to find a resolution to the S-400/F-35 problem.

Cavusoglu has also been suggesting that Trump sympathizes with Turkey on this topic.

“President Trump has also said that the United States has not been able to sell Patriot missiles to Turkey in the past, and he accepts that Turkey had to buy the S-400 from Russia,” Cavusoglu told a press conference with his Hungarian counterpart Peter Szijjarto on May 3.

The previous day, during a press conference with his Paraguayan colleague Luis Alberto Castiglioni, Cavusoglu also floated the idea — as yet unconfirmed by Washington — that Trump would be visiting Turkey in the near future. Cavusoglu said Erdogan had invited Trump during their phone conversation on April 29, when the S-400 issue was also discussed.

US media reports, one of which said, “Some State Department and Department of Defense officials are privately blaming President Donald Trump for failing to issue a tough ultimatum over the proposed [S-400] sale,” are also encouraging for Ankara.

Is Ankara’s reliance on Trump justified, however?

Notably, Trump did not use his executive power to exempt Turkey from the Iran sanctions, which would have enabled Ankara to keep buying Iranian oil. Previously Turkey was given such a waiver, but not this time.

It was also Trump who threatened in January to “devastate Turkey’s economy” if it attacked the People's Protection Units, Washington's Kurdish allies in northern Syria.

Pointing to the abrupt changes of position in Trump’s approach to policy, political analyst Murat Yetkin indicated that the US president was untrustworthy.

Writing for Deutsche Welle, Yetkin said, “Any positive message from the US president to Erdogan transmitted through the sons-in-law cannot be considered to be reliable, and could end up doing more damage than good.”

Yetkin also underlined Trump’s limited influence in Congress and argued, as others have done, that even if he were to act on behalf of Turkey, he would still come up against the anti-Turkish atmosphere in Congress due to the negative feelings there toward Erdogan.