Turkish President Recep Tayyip Erdogan boasted that Turkey will co-produce the S-500 missile system with Russia following completion of the S-400 deal, but existing realities put this into question. 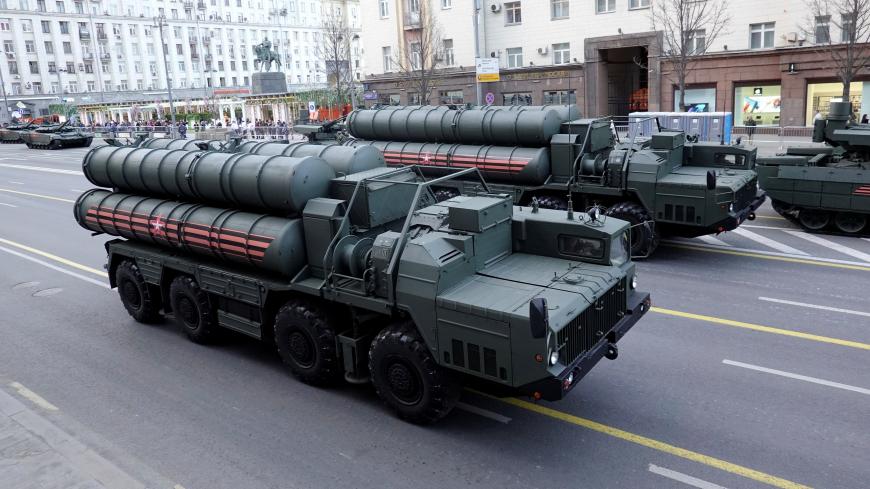 Russian servicemen sit in the cabins of S-400 air defense missile systems on Tverskaya Street before a rehearsal for the Victory Day parade, which marks the anniversary of the victory over Nazi Germany in World War II, Moscow, Russia, April 29, 2019. - REUTERS/Tatyana Makeyeva

Relations between the United States and Turkey have become tangled into a knot. Attempts to reach a compromise on the issue of Syrian Kurds have repeatedly stumbled, whereas Ankara’s purchase of the Russian S-400 anti-aircraft missile system is believed to threaten “NATO solidarity” with erosion. Turkey has reportedly about two weeks to decide whether to buy American Patriot missiles or face harsh penalties for the deal with Russia. The Turkish Foreign Ministry slammed this ultimatum, and so did Russia.

"We are going on the many statements made by representatives of Turkey's leadership headed by President [Recep Tayyip] Erdogan that the S-400 deal is already complete and will be implemented,” Kremlin spokesperson Dmitry Peskov said on Wednesday.

"We regard this [US position] extremely negatively. We consider such ultimatums to be unacceptable," Peskov added.

Turkey is obviously trying to maintain the balance of interests. Ankara demonstrates steadfastness, declaring that expanding the cooperation with Russia is possible, and shows that it is getting prepared for potential restrictions yet still hoping for a reasonable compromise.

Turkey’s Defense Minister Hulusi Akar announced the first group of Turkish military personnel had already arrived in Russia for the training course to operate the S-400 systems. All of this is happening amidst ongoing US-Turkey talks over the purchase of the Patriot deal, including the missile system’s price, possibilities for co-production and technology sharing.

Erdogan appears to be hoping that both the American and the Russian deals eventually go through.

“They (the Americans) are passing the ball around in the midfield now, showing some reluctance. But sooner or later, we will receive the F-35s. Not delivering them is not an option,” Erdogan said.

He recently pointed out that the purchase of Russian S-400s “under highly favorable terms” may be followed by “contracts on S-500s, including the projects of joint production.”

This is not the first time the Turkish leader has expressed interest in the S-500 air defense systems. Back in summer 2018, Erdogan said he had requested his Russian counterpart, Vladimir Putin, to “produce the systems in cooperation.” Back then, his remarks went without comment from Moscow. This time, however, Peskov confirmed that the two presidents had indeed discussed the prospects for a contract on an S-500 supply to Turkey despite the fact that the system is still not licensed for the Russian army itself.

The two presidents may have indeed discussed expanding the military-technical cooperation, including joint projects that involve innovative systems. However, in the current situation, Peskov’s remarks should also be considered a gesture of political solidarity. Besides, given NATO’s concerns over Russia’s ability to learn how to indicate and track American aircrafts using radars — in case Ankara gets both the S-400 missile system and F-35 fighters — Moscow wants to lend Ankara a supportive shoulder. Turkish Foreign Minister Mevlut Cavusoglu claimed that in case the F-35 deal fails, his country is ready to buy Russian aircraft. At the same time, Sergey Chemezov, head of Russia’s state-owned Rostec Corporation, who is sanctioned by the United States, told the Anadolu news agency that Russia had approved the documents allowing the export of Su-57 fifth-generation fighter jets, and Moscow was ready to negotiate with Ankara on their sale.

Remarkably, like the S-500 missile system, Su-57 jet fighters are not yet officially adopted by the Russian army. At the same time, one should note that Moscow seems to be ready to share some innovative weapons technology under its traditional condition — characteristics of exported weapons are always lower than those used by Russia’s own troops.

Russia has a mixed bag on this subject matter — its dealings with India are particularly illustrative. But the Russian military industry has already experienced collaboration in the design of weapons that were adopted by the national troops only after the export contracts had been implemented. For example, the Pantsir-S1 short-range air defense system appeared in Russia due to the contract with the United Arab Emirates, which had funded the development. Interestingly, the Russian army has ended up being only the fourth purchaser of the system, following sales to the Emirates, Algeria and Syria.

The dominant view in Russia on the S-500 is that the system will utilize the full potential of long-range, high-altitude interception capability, representing the new generation of air and missile defense systems. If first drafts of the S-400 had been created back in the Soviet era, the development of the S-500 started as late as 2003. The S-500’s alleged parameters are quite impressive: an impact radius of 600 kilometers (372 miles) and the capability to detect and destroy aerodynamic targets — both intermediate- and intercontinental-range ballistic missiles — in the middle and final portions of their paths. The S-500 operating system allows for merging with other defense systems — including the S-300 and the S-400 — into a unified, multilayered structure to create areas where air and missile defense facilities are concentrated. As stipulated by the current national program for the army re-equipment planned for 2011-2020, Russian aerospace forces were scheduled to receive 10 divisions of S-500 systems.

“Mentioning the possibility of cooperation but falling short of mentioning specific timelines is a well-known political measure. The S-500 system is not yet adopted by the Russian army. Usually, several years pass between establishing internal use of weapons and exporting them,” Andrey Frolov, a military analyst and editor-in-chief of the Russian “Arms Export” periodical, told Al-Monitor.

“In theory, it is certainly possible that the export version of the S-500 is designed in advance. However, it is still unlikely, and there is no credible information to prove this idea,” he argued.

Russian military expert Yury Lyamin informed Al-Monitor that even after the S-500 is officially licensed for the Russian army, the production of the systems would likely be aimed at meeting local needs for several upcoming years.

“For instance, the S-400 system had been adopted inside Russia in 2007; however, its export started virtually a decade later,” Lyamin said.

Andrey Frolov believes that Erdogan’s claims about the joint production of the S-500 should be viewed within the context of Turkish-American tensions and as a result of mounting pressure over the S-400 deal.

“Numerous issues of Turkey’s internal politics, foreign relations and technology are tied up with the S-400 deal. For the Russian side, this situation is quite peculiar — similar, perhaps, only to the export of the S-300 to Iran. However, that case did not cause such controversies around domestic politics and technical matters,” Frolov said.

As far as the S-400 deal is concerned, some nuances are important. Localization of production of the system in Turkey as well as technology sharing had been key ingredients thus far in making the deal beneficial for Turkey. At least since 2017, the Turkish Foreign Ministry has argued that the deal won’t go through without observance of the two conditions. Back then, Russians saw this statement as an “element of politics” on the part of Turkey in its talks with the United States amidst Washington’s approval for the THAAD anti-missile system deal with Riyadh following the Russia-Saudi Arabia agreement on the export of the S-400. Subsequent Russian-Turkish consultations resulted in an agreement on eventual localization of the S-400 production in Turkey, though “objectively limited — no more than 15%,” as Russian sources described it to Kommersant.

“Even in the situation around the S-400, it is unclear whether the production will be localized,” Frolov said.

“Firstly, it was initially supposed that Ankara would receive the first systems in 2020. However, as requested by the Turkish side, the contract’s timelines were set earlier. Secondly, 55% of the contract value is going to be funded by a Russian loan; this negotiation position is not quite suitable for localization requests, though it is possible that later, the elements of S-400 systems from the last installment will include wheeled undercarriages made in Turkey,” he explained.

Lyamin reminded that the air defense systems include a variety of elements besides the launchers, missiles and radars, such as tow trucks and cranes.

“Though it is hard to grasp what 'localizing production of specific details' exactly means if sensitive technologies are not provided, it may include using Turkish-made vehicles, communications and other equipment,” he argued.

Thus, if the already-signed contract on the S-400, agreed upon in an extremely short time and based on personal arrangements between Putin and Erdogan, includes so many grey areas, no conditions for actual co-production of the S-500 currently exist. Let alone, it’s not clear how the Russian-Turkish bilateral relationship transforms in five to seven years, and how it may change the course of military cooperation between the two countries.